Harvard University won the Danmark Trophy, hosted by the United States Coast Guard Academy. The Crimson finished 46 points ahead of second placed St. Mary’s, led by a dominant B-Division performance by Henry Burnes ‘21 and Lulianna Tarista ‘20. The tandem defeated Luke Arnone ‘23 and Meredith Ryan ‘22 of Yale by 36 points. Burnes and Tarista scored only one race outside the top-8 and only had 3 races outside the top-5; including five first place finishes, three in the last four races of the event.

Harvard accrued 199 points while St. Mary’s finished second with 245 and Yale was third with 278. Harvard’s margin of victory was the largest at the Danmark since 2016 when Yale beat Coast Guard by 50 points behind Ian Barrows and Nic Baird.

Harvard’s A-Division boat, Eli Burnes ‘21 with Emily Wang ‘21 and Eric Hansen ‘22 managed fine compared to their B-Division and twin-brother-counterpart, Henry, finishing only 10 points away from first in the division. Eli Burnes, Wang and Hansen also finished with five bullets.

Earlier this season, Eli Burnes finished second in A-Division at the Harry Anerderson regatta at Yale. Brother Henry finished third in B-Division at the same event. The twin brothers, coupled with some experienced crews should push Harvard towards the top of the College Rankings whenever they are published.

“Part of our success was due to some talented sailors continuing to get better,” said Harvard coach Bern Noack. “That is a tribute to them continuing to work at it. The sailors started pretty well, seemed fast in all conditions but I think most importantly were really good at sailing the puffs and shifts on really long beats and runs.”

Yale won the Women’s Showcase, passing Harvard in the final race of the regatta. Yale finished with 147 points and Harvard had 151 points. Harvard had been leading with a slim margin over Yale throughout most of the day on Saturday. But after a DSQ was added to Yale’s A-Division boat, Harvard pulled ahead and remained in front throughout the day on Sunday. However, Yale hung around and made a late push led by Chrissy Klingler and Sonia Lingos-Utley in B-Division.

The regatta was a tough event that rewarded excellence as the one-track racecourse that developed throughout the day on both Saturday and Sunday, despite opposite breeze directions, presented very few passing lanes and rewarded those who could hang off the crowded starting line.

The Bulldogs sailed very well, finishing fourth in A-Division and first in B-Division as Chrissy Klingler ‘20 and Sonia Lingos-Utley ‘21 defeated the next closest boat by 18 points, finishing with 56 points after 16 races sailed. Klinger and Lingos-Utley dominated, finishing in the top 7 in all but one of their races.

Yale was trailing Harvard by 15 with only two sets remaining. Klingler and Longos-Utley finished the regatta with six races all within the top-2, including three wins in the last 4 races. As good as Nordstrom and Loiacono and Mollerus are, (Nordstrom was a College Sailor of the Year finalist last year, Loiacono was an Honorable Mention All-American) for yale to win a National Championship, Klingler, Lingos Utley and, presumably, Nicolosi will have to continue this dominant effort in B-Division.

Emma Kaneti ‘22 and Emma Jakobson ‘21 of Harvard won A-Division with 67 points after 16 races, besting Michelle Larhkamp ‘23, Sammy Pickell ‘22 and Ashton Bocherding ‘22 of Stanford. Kaneti and Jakobson had only two races outside the top-7 as the Harvard A-boat led what was very nearly wire to wire win for the Crimson.

“I think the biggest key to our success last weekend was our ability to start and hold our lane to ensure we were in phase,” said Harvard coach Mike O’Connor. “Emma Kaneti and Emma Jakobson were fast and they consistently started well. Sarah Burn and Jessica Williams were very good at executing their plan even when their starts weren’t very good.”

The top-9 teams advance to sail in the Showcase Finals on October 12-13 at the US Naval Academy. In order, the nine teams that advanced from this half of the event are Yale, Harvard, Dartmouth, Navy, Stanford, Cornell, Boston University, Northeastern and Tulane.

The other half of the Women’s Showcase Qualifier was held by Brown University and won decisively by the home team, Brown, the reigning Women’s National Champions. Brown won both divisions and beat the next closest team, MIT by over 100 points after 15 races sailed in each division.

Last year’s Women’s College Sailor of the Year, Ragna Agerup ‘20 with Julia Reynolds ‘21, Caroline Bayless ‘23 and Emma Montgomery ‘22 won A-Division for the Bears, winning almost half the races she sailed. Brown’s A boat finished either first or second in 11 of the 15 races sailed.

This regatta was the first women’s appearance for Agerup thus far this season. She had previously sailed 3 in-conference NEISA coed regattas, including an A-Division win at the Hoyt trophy, also held at Brown. 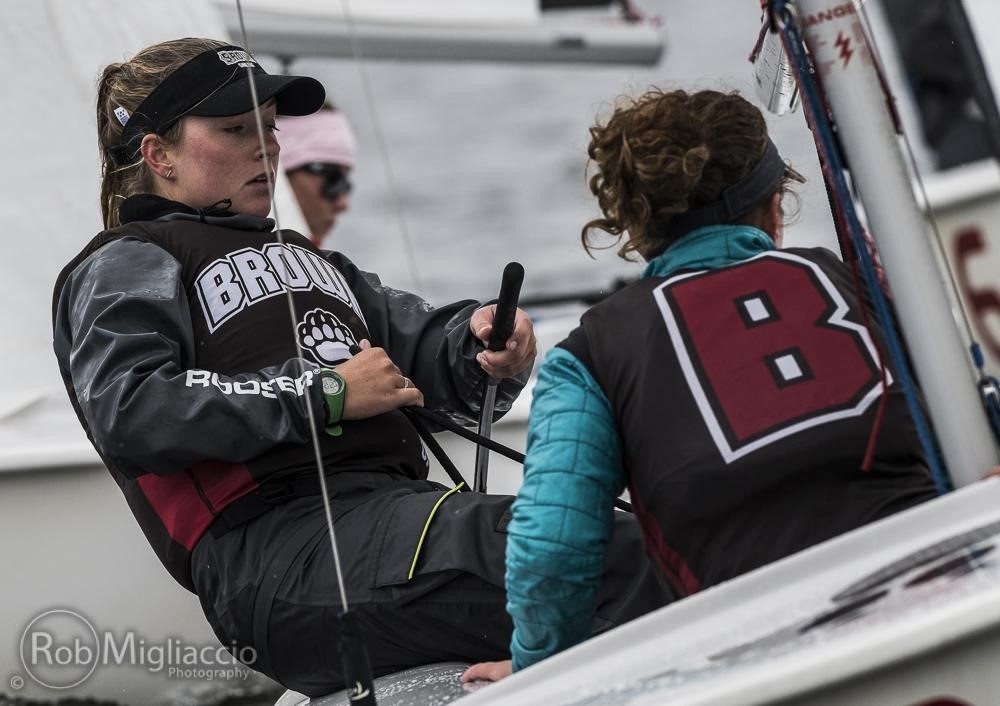 Hannah Steadman ‘20 with Annabelle Hutchinson ‘21 and Emma Montgomery ‘22 in B-Division for Brown were perhaps even more impressive than their teammates. Brown’s B boat won by 32 points over the second place finishing team in that division. Steadman, Hutchinson and Montgomery finished either first or second in all but three of the races sailed and won 8 of the 15 races sailed.

In the first 14 races sailed in the two division combined, Brown had 10 firsts, three seconds and one breakdown scored.

“We sailed our top women’s group for the first time this season at the Showcase Qualifier at Brown,” stated Brown Head Sailing Coach, John Mollicone. “Many of them are returning members from the 2019 National Champion Women’s team.  We also added 2019 All-American crew Julia Reynolds to that group and Freshman Caroline Bayless as a crew.  Most of them are sailing the A-level coed events this year so they have had some really good regattas to help them further improve, particularly on the starting line.”

“Being at home certainly helps as they are really comfortable at our venue and in our boats of course,” continued Coach Mollicone. “It was windy the first day and for the beginning of the second day at the Showcase Qualifier, somewhat similar to what many of them sailed in at the 2019 Women’s Nationals in Newport.”

“They continue to improve on some small things from last year but I would say their ability to have really good starts throughout the weekend was the difference.  Their boatspeed, boathandling, and decision making was strong as well.  Most of the same group will sail the Coed Showcase Qualifier this weekend at Navy and then the Women’s Showcase Final at Navy as well.  It’s only going to get harder at both events, so we’ll see how we stand against the best coed and women’s teams during the upcoming weekends.”

Brown had 73 points. MIT finished second with 175 points and Tufts was third with 178 points. Like the other half of the Showcase qualifiers, 9 teams move on to the finals. After Tufts was University of Pennsylvania, Boston College, College of Charleston, University of Rhode Island, Georgetown and Fordham, respectively.

Stanford University won the Moody Trophy held at the University of Rhode Island on the Salt Pond. Stanford held a lead throughout most of the event that widened to 28 by the end of the event. The victory was driven by A-Division sailors Jack Parkin ‘21 and Taylor Kirkpatrick ‘20 who, despite finishing with a 13th, won the division by nearly 20. Parkin and Kirkpatrick finished in the top 4 in 7 of the 13 races sailed. However, the dramatic margin of victory came at the end of the event when the Cardinal’s B-Division boat, Wiley Rogers ‘22 and Abigail Tindall finished the event with a 2,4,1,1. That, along with two first and a second by Parkin and Kirkpatrick established the Cardinal’s lead and caused it to grow from three points behind Brown to 28 points ahead over the last two sets in each division.