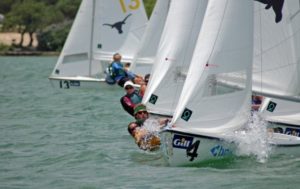 Recognizable to many youth sailors who grew up on lakes, ponds, or on the west coast, the Club Flying Junior (CFJ) is often used instead of C420s in youth sailing and collegiate programs.  Originating in the mid 20th century in the Netherlands, it has spread to many clubs across the United States.  The CFJ’s characteristics have made it a very popular on the west coast and on inland sailing venues.
The Boat: CFJ, Light Air Machine
The CFJ is a light, maneuverable boat at 13 feet long, 4 feet wide and weighing in around 220 lbs.  Slightly shorter, narrower and lighter than the C420, the CFJ is designed to go upwind, fast.  Narrow bow entry and a more rounded hull shape than the C420 means better upwind feel at the sacrifice of the ease of planing.  A three-sail boat, the CFJ has a smaller main, larger jib and smaller spinnaker than the C420.  The main sail is trimmed from the traveler bar in the cockpit and instead of having a mainsheet bridle to change trim angle, there is a traveler, which can be slid to windward or leeward.  Additionally, jib trim angle can be adjusted from sliding jib block cars. 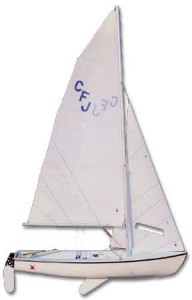 With only several thousand hulls in the water (as opposed to the nearly 8000 C420) internationally, the 2014 US National Championship saw a 53-boat fleet from mostly California based programs.  In 2013, the World Championships in Germany had 57 boats from European countries. 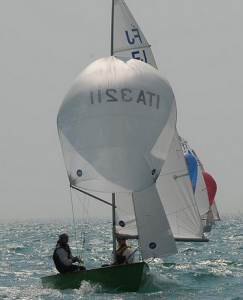 Set Up and Sailing: Upwind Groove
While not nearly as much data exists for CFJ tuning as does for the C420, reliable tuning guides can be found from several sources (https://sail1design.com/wp-content/uploads/2014/08/NorthSails_FJTuningGuide.pdf) and here (https://sail1design.com/wp-content/uploads/2014/08/FJTuningGuide.pdf).  Similar to the C420, mast rake and tension affects power in the rig and is adjusted from the chain plates and jib halyard tension respectively.  Mast butt position is adjusted slightly to help the mast tip get forward or back.
Upwind the CFJ is lively and quick.  It likes to point and drives off the large jib much more so than the C420.  Traveler should be adjusted so that when the main is centerline, the top batten is parallel, or as close as possible, to the boom.  This means traveler up in light air and back down towards the center as the wind increases.  Jib trim is a very dynamic process in the CFJ.  Car position should be adjusted so that the telltales both break evenly.
Because of its weight and hull shape, the CFJ responds well to boat handling and smooth maneuvers.  It is very susceptible to side slip if not kept flat, which puts a premium on crew position.  Because of the relatively wide transom, getting combined weight forward in lighter conditions is very important to break the suction that can occur.  Driving the CFJ requires a light hand and a willingness to point to keep it in the optimum upwind “groove”.
Off the wind the CFJ will plane on main and jib alone, however for deep downwind sailing the spinnaker is used.  Similar to the C420, the CFJ spinnaker is launched from a bow basket and flown by the crew.  It is very important to keep the spinnaker round and full in order to maximize the sail shape.

Class Association: International Recognition
The CFJ class would be shortchanged if recognition of its international status was denied.  The International Flying Junior Class Association (http://ifjo.org/) services the needs of this internationally raced one design class.  Coordinating national, regional, continental and world championships, the class association has its hands full with the litany of participants from all of the major European countries as well as the United States and several others.
All one-design classes do not necessarily enjoy international class status. The C420 is not an international class, owing that honor to its close relative the International 420 (I420).  International appeal means events can have a wide range of sailors from all over the world.  It also means that events can require a bit of travel.  Having a relatively small number of hulls (compared to the C420, Optimist, or Laser) in a large number of places can mean travel headaches for some wishing to compete on the regional or world stages. 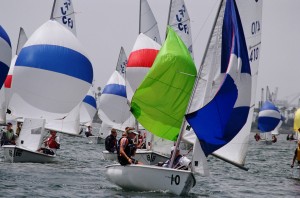 Why the CFJ?
Talk to many collegiate sailors and they may tell you that they prefer racing the CFJ to the Collegiate 420.  Talk to many west coast and European sailors and they won’t know anything else.  Either way, the point is that the CFJ provides fast, exhilarating sailing in a responsive and nimble dingy unlike anything else its size.  From junior sailors to college All-Americans, something must be right about the boat to keep them coming back for more.

To learn more about the c420, read our class profile!