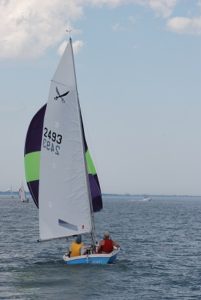 A Pirate’s Boat For Me: The Endurance of the Buccaneer 18

When looking for a great two-handed dinghy with a spinnaker, things can get a little hairy at times. That’s when you should think of the Buccaneer 18.  The Bucc’s, as they’re called, are great for beginning or experienced sailors, and is a wonderful and affordable way to stay in the game of sailboat racing.

The Buccaneer has a long and varied history as a one-design class.  First designed in 1966 by Rod Macalpine-Downie and Dick Gibbs, the boat has had many different builders over its 35 year history.  First introduced to the sailing world in 1967 at Yachting Magazine’s “One of a Kind” Regatta, the Buccaneer 18 made quite an impression and placed second behind a Thistle.  The sloop design with a hull of fiberglass reinforced plastic and spars of extruded aluminum has proven a consistent seller.  The boat was first produced by Chrysler Corporation who built the boats from 1968 to 1980 with just over 4000 boats produced.  Texas Marine Industries (TMI) took over the design in 1981, but only built the boats for a year, producing about 700 Bucc’s before another short-lived builder took over the building of the Buccaneer in 1982; Wellcraft Marine.  Wellcraft only built 250 boats from 1982-84 before Gloucester Yachts bought the mold in 1985.  Gloucester then renamed the boat the Gloucester 18, but only produced 60 vessels before it again sold the mold to Cardinal Yachts who built the boat from 1987 to 2000, still only producing about 30 boats in total.  In 2008, Nickels Boatworks bought the mold for the Buccaneer 18 and has been producing these great one-design boats ever since.

What makes the Buccaneer such a popular boat is its ease of use as both a daysailer as well as a competitive racing dinghy.  Seats in the cockpit allow for a smooth cruise and the sit-in aspect also makes the boat popular amongst dinghy racers who have graduated from racing 420’s and Vanguard 15’s, the sit-on dinghies.  One of the best aspects of the Buccaneer is its fast planing and symmetrically heeled design.  The boat, due to its relatively small waterline, planes in 8-10 knots of wind.  Due to its wide beam at the waterline, the boat, though a dinghy, eliminates the need for a trapeze.  This makes it an easier boat to sail and creates a bigger pool of capable sailors. In addition, the waterline is almost perfectly symmetrical which decreases a lot of the weather helm caused by the heel of the boat.  The high potential performance of the Buccaneer 18 allows for the skills of the helmsman and crew to be better rewarded than they would be in any other non-trapeze designed vessel.

The Buccaneer 18 is also one of the most popular boats in North America, with at least 17 active fleets around the continent.  This widespread notability allows for great racing all over the country and guarantees a great fleet at every North American Championship Regatta held, no matter the location.  In addition, the low Portsmouth yardstick numbers prove the boat to be a fast one and granting comparisons to boats like the Lightning and Finn.

Unlike many other dinghies raced not on the junior circuit, the Buccaneer uses a spinnaker as well as a jib and mainsail.  This makes the boat a great way for experienced helmsmen to improve their boat handling skills and a chance for crew to work on their ability to trim both a jib and spinnaker.  This can greatly impact the experienced sailor’s skills on big boats, allowing for a greater participation of skilled athletes in the sport.

However, the Buccaneer 18 also appeals to the beginner sailor due to its simple rigging, well balanced design and easy handling.  The roller furling jib is a big draw for the new sailor, cutting down on another sail to worry about dumping in the water when rounding the windward mark and allows for an easy transition from chute to jib at the leeward mark.  The roller furling jib is also what helps to make the Buccaneer 18 a great cruising boat, cutting down on the number of sails which need to be rolled and packed away at the end of the day.  Another tempting aspect of the Bucc for the new sailor is the ease in which the boat can be launched and hauled out of the water.  The centerboard makes the boat easy to trailer and at a relatively slim 500 lbs., all that is needed is a winch in order to lift it into the water.

Overall, the Buccaneer 18 is a great boat for a new sailors, competitive racers and daily cruises with the family.  It’s well constructed sail plan and ease of design have allowed the class to thrive for over three decades and will continue to ensure its survival far into the future.