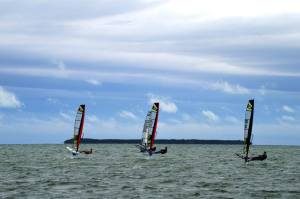 Looking for a new boat, and not only a new boat but a foiling boat? A boat that is fast, fun, durable, and affordable? The Waszp may just be it! Similar to the Moth the Waszp offers sailors with a more durable and affordable boat. Just recently at the end of January, the first Waszp regatta took place in the US. This regatta was part of the Winter Series that the Moth class has held at the Upper Keys Sailing Club for the past couple years. Since the US Waszp class is brand new the president of the US Waszp class Reed Baldridge thought this winter series would be a great stepping stone for the class. The regatta brought 8 sailors with Waszp’s all around the country, it was not only a great regatta but a great learning and brainstorming session for this new class. 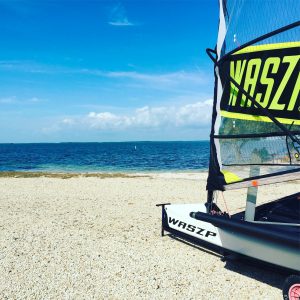 The Boat:
The Waszp is a one design foiler, that was created by Andrew McDougall, designer of the world beating Mach 2 foiling Moth. Recently, it was just named 2017 Best One-Design by Sailing Worlds Boat of the Year Awards. The Waszp and the Moth are similar in their concepts, but for a couple reasons, the Waszp hits a market of different dinghy sailors. First, the Waszp is half the price of the Moth, you can buy a brand new Waszp in the US for $12,500. Unlike the Moth the Waszp is a one design class. With the Waszp you have adjustable wing angles allowing you to adjust for your skill and for storage. The Waszp comes with retractable alloy foils making it an easy boat to launch. With a free standing rig, you can rig up quickly and have a much easier time getting back into the boat after capsizing.
The Regatta:
Day 1 (Friday, January 27):
The eight sailors were greeted with a light breeze, 5-8 knots. All the sailors varied in their Waszp experience. You had some sailors who had 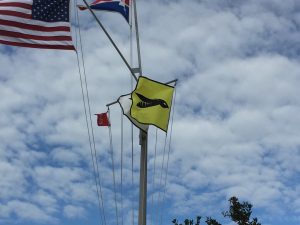 been sailing the Waszp for a couple of months where for some of the sailors it was their first time in the boat. Day 1 was frustrating as it was light with marginal foiling conditions. However, everyone in the class helped each other out as they learned throughout the day. John Wallace had good speed and took the day with a 2, 1.
Day 2 (Saturday, January 28):
The breeze was great at 8 am so before the racing got started some of the sailors made their way out on the water to get some foiling practice 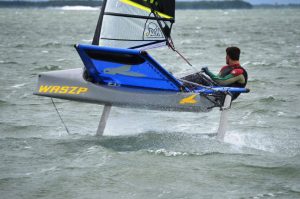 in. Slowly the breeze died off to 5-8 knots again once the racing got started at 11 am. Some sailors were able to get foiling for a little bit, but it was another day of tricky racing. Matt Goetting, “The angles were so crazy on both the upwind and downwind that it didn’t pay to be foiling.” Another slow moving day, but the group was able to get 4 races in with Connor Blouin taking the lead, followed by John Wallace, and Peet Must. The group all headed out after sailing to the local tiki bar where they all chatted about everything from foiling to fruity drinks.
Day 3 (Sunday, January 29):
The breeze was on! The group showed up to 25-30 knots but then dying down to 18-25 knots. It was an exciting day of racing for the group. The speed and angle differences with the Moths made things interesting on the water. Reed Baldridge, “I was actually amazed at how close the top marks were, it reminded me of laser races with the top boats within boat lengths of each other.” The name of the game downwind was staying upright, which proved to be a difficult one in the breeze. Only a few breakdowns for the day, but all in all it was the most exciting day of racing getting in three races to finish the regatta. Connor Blouin took the win, with a total of 11 points, Peet Must in second with a total of 18 points, and John Wallace in third with a total of 19 points.

The second series to be held February 17-19th and the third and final on March 31-April 2nd.
Then the weekend of May 20th-21st the Waszp Atlantic Coast Championships will be held at Toms River Yacht Club. More info to come! Contact your local Waszp dealer today to get a boat by the Atlantic Coast Champs.
The learn more about the Waszp check out the website: http://www.waszp.com and Like International Waszp United States Class Association on Facebook for updates on the class in the US. This is only just the beginning for this new exciting class!