Close
Signup to Receive the latest news, events and Sailing jobs Via your inbox
You are here: Home / From the Experts / Reinventing the Wheel: Seldén’s New Jib Halyard Turning Block

A number of classes, including the Fireball and Flying Fifteen, have moved from 2:1 jib halyards to 1:1 systems. The reasoning behind this has been weight and windage, but it has doubled the load on the turning block in the mast. This also came at a time when the classes started using higher rig tensions, further increasing the stress on the block, leaving Selden Mast’s Andy McCormack with a problem to solve and a solution to find… something he excels at.
The previous sheaves had ball-bearings and we asked Andy what problems this was causing in the jib halyard turning block, “The problem with ball-bearing sheaves is that they are designed to take a low load at high speed; they are low friction, with a rolling contact rather than sliding contact. The problem we had with this application (on certain dinghy classes) is that it’s a high static load, with very little movement once the jib is up. The ball bearing race wasn’t doing anything for you apart from reducing the bearing area, so we decided to move to a plain bearing.”
A plain bearing typically has no moving parts and can be made of a polymer, loaded with PTFE which is pressed into a housing and runs around a plain stainless steel shaft.
“In a static load situation the load handling is all about the area. The load is distributed over half the area of the shaft and all we need to do is stop the shaft and the sheave from deforming. The sheave still rotates very slightly as it is transmitting the full rig tension; the only time it has to rotate quickly is when the jib goes up and down which is under very light load where the sheave spins very well, without the need for ball bearings.” Andy explains. 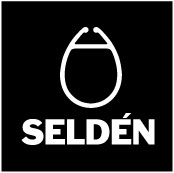 So instead of a ball-bearing sheave, where the small contact area of the upper ball bearings take the full rig tension, the load is spread throughout the top of the plain bearing: a far greater surface area.
“We already had a lot of experience with very high specification PTFE plain bearings which we use in our deck hardware, so we first of all tried using a standard one of those in this application, but because the loads on this tiny sheave are huge even that wasn’t enough area. So we introduced an additional stainless steel bush inside the sheave to increase the load bearing area, increasing the load bearing diameter to 20mm. This meant – from a production point of view – we could keep the standard sheave box and pin so that it can be retrofitted into an existing mast.”
The new sheave is already proving popular and is getting the results. Most recently Steve Goacher and Tim Harper used the plain bearing sheave box on their Seldén Epsilon mast while winning the Flying Fifteen Worlds in New Zealand. The sheave has been thoroughly tested throughout 2016 by Team Seldén riders on the Fireballs and Flying Fifteens.
www.seldenmast.co.uk