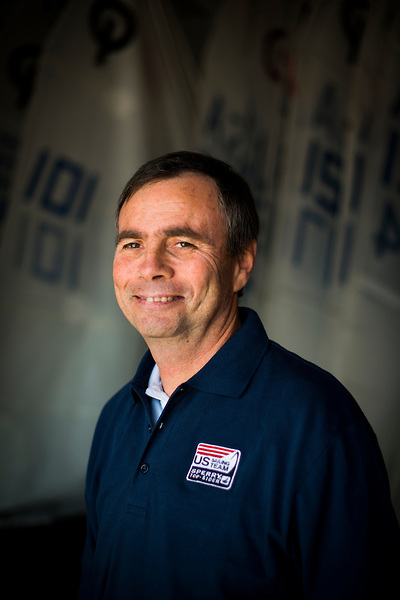 RANDOM CHAT
What, in your opinion, is the very best thing about our sport?
My favorite part of sailing is the strategic and tactical decision making.  Team racing is best because the decision making is non-stop.
England “Knights” people. Elton John, Paul McCartney, and of course Ben Ainslie (I mean, Sir Ben Ainslie). If you could “Knight” 3 American sailors, who would they be? Requirements:

Paul Foerester, Mark Reynolds and Anna Tunnicliffe.   Gold Medalists.  But then you’d have to add Kevin Burnham, Magnus Llejedahl and Hal Haenel.  (spelling all names?)
Are pro sailors ruining, or saving, One-Design sailing in fleets like the J/70, Etchells, etc?
I don’t know, I don’t sail those classes.   I think I’m an amateur again though.
What is your absolute top, favorite, one-design class?
Easy question.  505 will always be my favorite, even though I’ve been retired for 25 years…
The America’s Cup is in AC foiling Cats. Good thing, or bad thing? If bad, what should this event be sailed in?
Foiling cats are cool, but I don’t really have opinions about AC Cup.
Should the sport of sailing continue to try to get on TV? Why or why not?
TV is obsolete.  Most of the time I can’t stand to watch Sailing on TV.  The game element is completely lost.  All you see is a few mark roundings and a finish.  Boring.  Sailing should move ahead with a really good digital streaming presentation that combines tracking, video, graphics, drone shots, and expert commentary.
US Optimist Class: Great for the sport, or too much, too soon?
I think the Optimist class is great, but if we start that young we need to revamp the progression.  My generation started sailing at age 12 and the dynamic of the junior program was young teens.  Now the dynamic in junior programs is older children.  High school sailing is wildly successful because it’s the teen sailing scene.    Best thing about Optis is that two kids can launch their boats themselves, and they can sail their boats in 20 knots.  When we were young we sailed ridiculously overpowered boats for kids.
US Olympic Sailing. Where are we, and should the USA be better? If so, how can we get there?
We’re on the right track with increased funding, youth development and expert coaching.   But the USA is a huge country and we need to increase youth development by another factor of ten.  We also need to bridge the gap between self funded campaigns and USST funded programs.  It’s still a bootstrap effort to get good enough to qualify for funding.  Also need to improve retention of athletes between quads.  Our sailors need funding to pay rent, buy health insurance, contribute to 401K, and also pay all the expenses related to sailing.
Rio predictions? Medals for USA?
0-3 (wind, current and medals)  Seriously, six Medal Race appearances should be judged a success, and then we need most of those teams to return for 2020.
COLLEGE SAILING 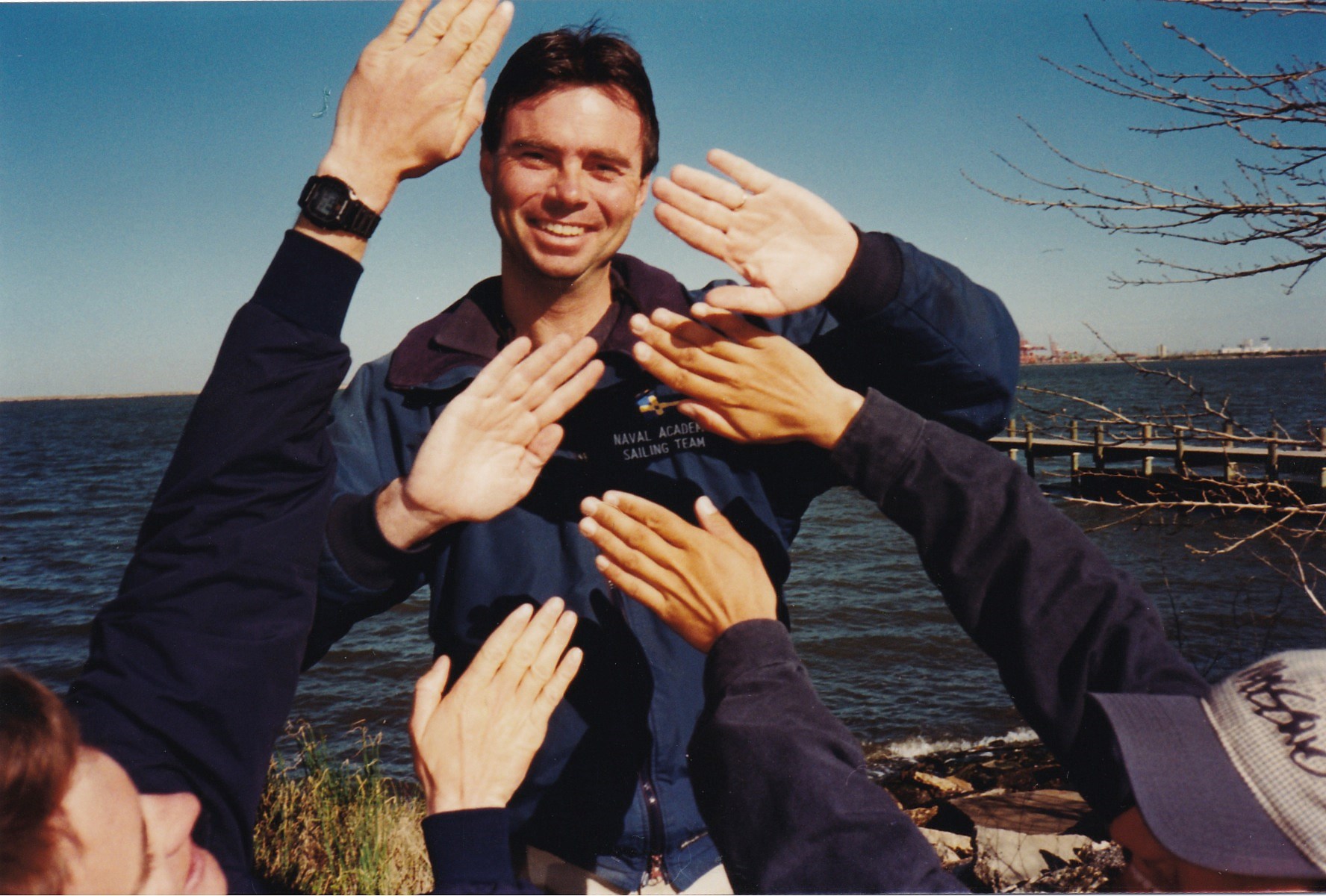 Many feel you were present at the creation of modern college team racing, to say the very least. Others say you re-defined team racing with your success at Navy. How do you look back on your contribution to college team racing, something that has become the pinnacle of college sailing?
Ironically, my lasting contribution has turned out to be the language of team racing.  (See photo, “Play One”). We invented a bunch of terms to discuss our system at ODU and Navy, but we tried hard to keep that stuff secret.  It wasn’t until I did a few coaching seminars and spilled the beans that it became the lexicon.  I thought the coaches at the seminar would go home and rename all that stuff, but it really stuck, and even became international.
You have coached Navy and Hampton U., among others. These are two different programs, to say the least. Which is/was more rewarding?
My heart is probably still with ODU where I started coaching in 1978, but it was also an honor and privilege to lead the Naval Academy team in the early 90’s.  The sailors at Hampton University were really special, and it was very rewarding to initiate that program in my hometown.  I’d probably still be there if the Olympic Team opportunity hadn’t come along.
On a scale of 1-10, how would you rate the competency, professionalism, and the overall state of US Sailing team race Umpires and Judges? Why?
I’ve actually only sailed a couple of umpired team race regattas in Sonars, so I don’t really have the experience to rate the umpires.  Basically, I think they’re very good, but I believe the rules are the problem.  The call book is ridiculous.  We need to change the paradigm so that the authors of the call book have the latitude to define calls that make the game simpler for competitors and easier to officiate, even if that call might not be technically correct in the rules.  Rewriting the call book in a sensible manner should actually be easier than trying to fix the rules.  And if we did that for match racing as well, then we could actually start to have really simplified rules for fleet racing.
Shouldn’t college sailing be a one-season sport? Why, or why not? To that point. 4 years, 2 of 3 seasons, sailing FJ’s or 420’s every day. Many college sailors, when they graduate, claim to be “burnt out”, and leave dinghy sailing, often never to return. How do you react to this statement?
College sailing is a really cool game and it was my life for 25 years.  I’d keep it two seasons but delete the singlehanded and match race as national championships.  They could continue as intersectional like the Kennedy Cup for those that are interested in those specialties.  Then I’d make it fleet racing in the fall and team racing all spring.
We ought to make women’s sailing an NCAA sport.  The amount of funding that poured into women’s crew when it became NCAA is unbelievable.  Boat houses were built, coaches hired, scholarships provided, travel to nationals funded, and boats purchased.  It’s time to reconsider scholarships for sailing.
The other challenge for college sailing is that high school sailing has exploded.  Eight years of roll tacking an FJ is overkill.   I don’t have solution for that problem because it’s hard to imagine skiff sailing in college venues.  I would make some tweaks like extending the target time for college fleet races to maybe 25 minutes in breeze and 35 minutes in light air.
Overall, what is the weakest thing about college sailing? In other words, where, or in what realm, can the ICSA improve the most?
See above. 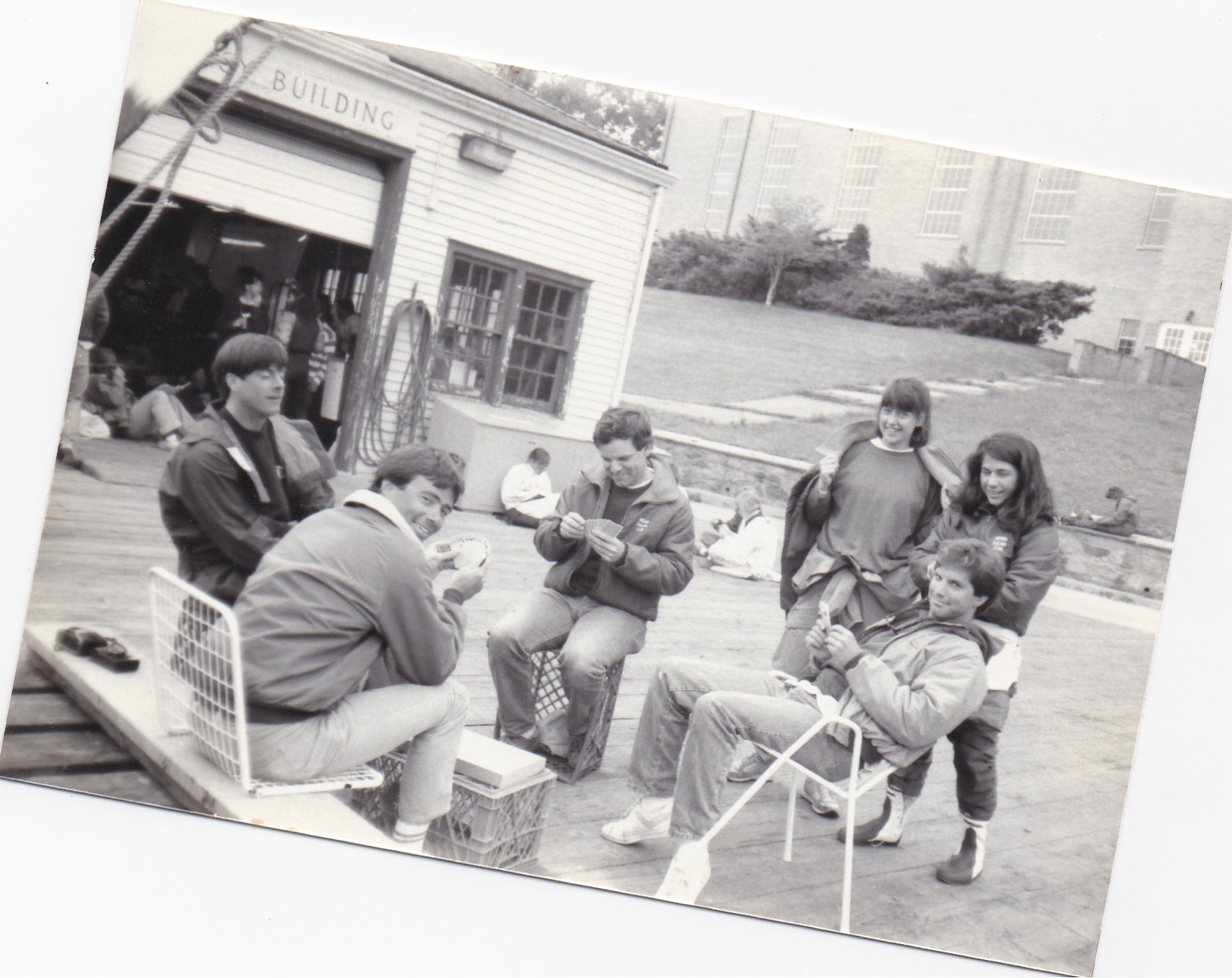 Photo, left: “Playing Hearts” at KP, ICSA Women’s Nationals, circa 1987.  Ken Legler (Tufts), Brad Dellenbaugh (Brown), KC Fullmer (Northwestern), Gary Bodie (Naval Academy).  I think the two women sailors are Northwestern team members. “Pretty sure I shot the moon and won in a walk off”
COACHING
College sailing is a sport where women can compete with men, on equal footing. This is rare. Did this affect how you coach?
Coaching women is different than coaching men.  In general terms, women tend to personalize criticism, and guys tend to just blow it off.  The art of coaching is to individualize the feedback to the athlete including gender as one of the variables, although I seem to have a knack for infuriating men and women about equally.
What problems, if any, can this create on a team?
Sometimes you have to act to prevent bullying or intimidation.
What positives, if any, can this create on a team?
As I said earlier, college sailing is a cool game and part of the reason why is that there are men and women involved.   Coed is more fun than just a bunch of smelly guys.
What is your proudest personal moment as a coach?

Can’t pick just one.
PERSONAL STUFF
Do you remember the very first time you went sailing? If so, tell us about it.
On an Aqua Cat with a friend at age twelve in Hampton Roads.  We had just moved to Hampton from Northern Virginia and I had no previous experience with boating or sailing.  I was hooked.
How is adult team racing going in Hampton? Do you see this growing?
We’re still having a blast team racing in the Sonars, but it’s a struggle sometimes to get enough boats out to do 3 on 3.  Between PHRF, cruising and one design, there are too many fun opportunities to sail at our club. 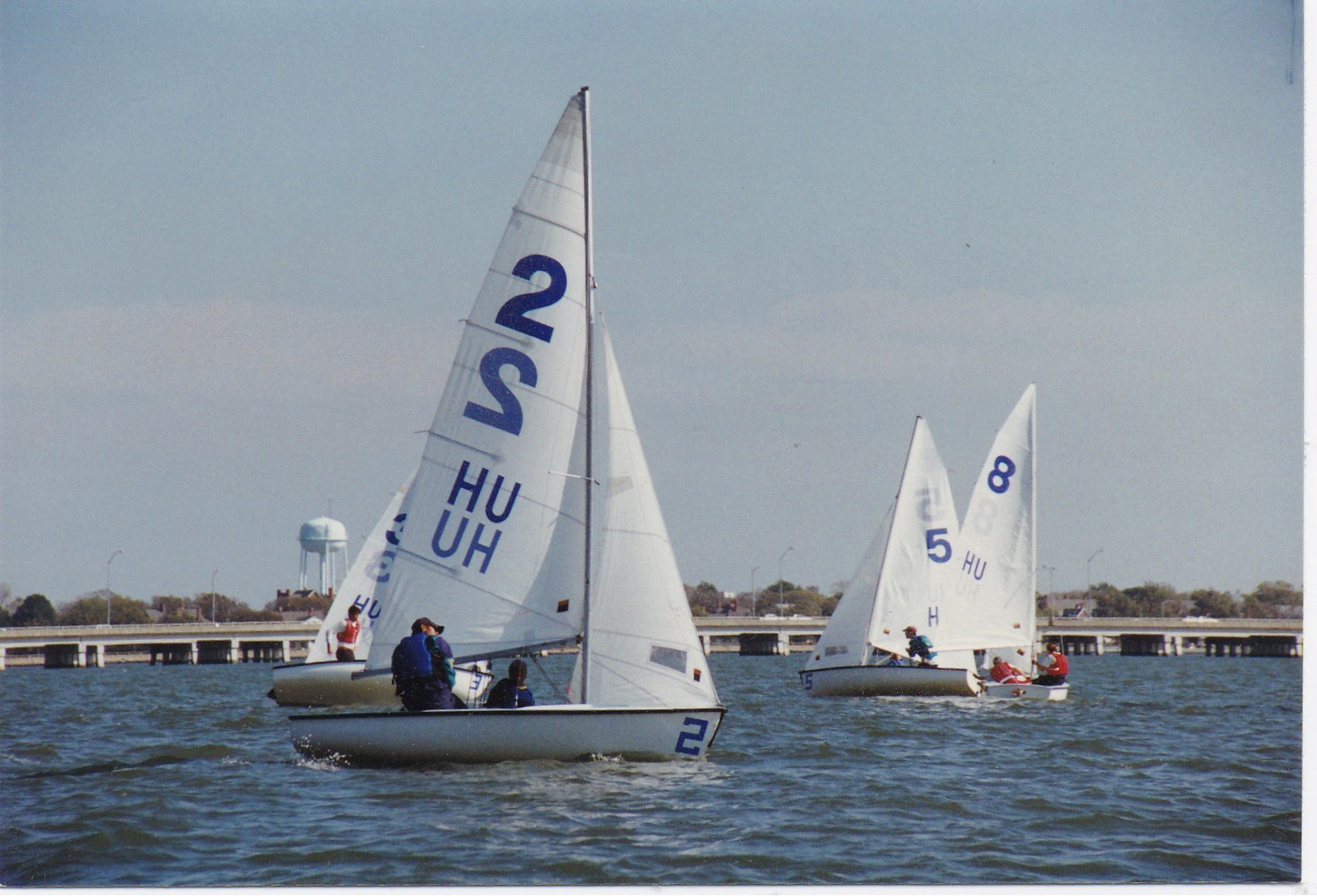 Do you still sail competitively? If yes, how, when, and where? If your answer is “I don’t”, then do you miss competing, or does it not bother you?
I’m only doing the adult team racing.   We’re trying to do one or two actual regattas each year, but I’m also content if we just sail against ourselves at home.    I think I’m done with serious campaigning.  I do dream about getting a 505 and sailing the Worlds in Annapolis next year.  Probably better to talk a good game though.
Tell us about the Ft. Monroe project. What/whom is it serving now, and where is it headed?
We’re a community sailing center and our major impetus is providing a venue for high school sailing.  I’ve visited hundreds of yacht clubs and college sailing centers around the world and there are few that can match our venue on Mill Creek at Ft. Monroe.  Protected water, no traffic and almost unobstructed wind.  Actually reminds me a bit of team racing at West Kirby on Marine Lake in the UK.
We tried to start a community sailing center in Hampton 20 years ago and it was like pulling teeth.  This time the reception from the City, the Fort Monroe authority, and other partners has been phenomenal.   We’re going to add instructional sailing as our facilities improve.  My 505 partner, Kevin Eley, really deserves the credit for this project at Ft. Monroe.
When you were young, did you dream about becoming a college coach?
No, my high school class voted me “Least likely to have a career in Athletics,” and then at our 25th reunion I won for “Most Improbable Career.”
Based on your experience in the sailing industry, what advice might you give to those seeking a similar career path?
Get a real job.