Sail1Design is pleased to announce the winner of this year’s KO Sailing High School Team of the Year Award: St. George’s School. Among many nominations it came down to three finalists: Newport Harbor, Point Loma, and St. George’s.

All three teams deserve this award. In the end, among many other highlights, it was St. George’s perfect, undefeated record at the Team Race Nationals that made them stand apart, along with an undefeated 22-0-1 spring season in the short but competitive and intense New England high school sailing circuit. Sail1Design would like to thank all the nominators, and their thoughtful letters. This was far more difficult than we expected. Here are some words from the nomination letter we received: 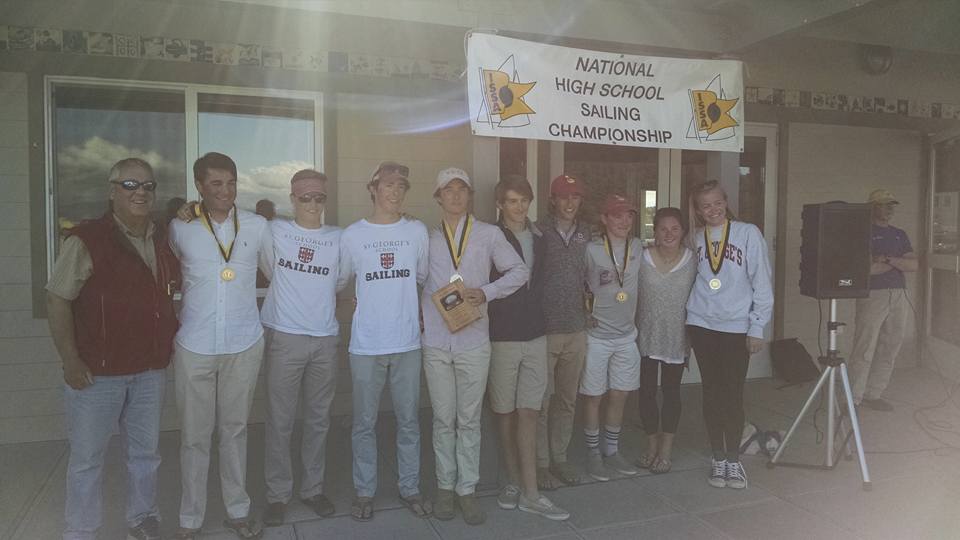 I would like to nominate St. George’s School of Middletown, Rhode Island for the High School Sailing Team of the Year. While there are numerous factors that would and could qualify this team for such an award singly, the combination of them all makes a very strong case. This is an incredibly deep team in terms of talent and experience. In a daily practice environment, Coach Roy Williams is able to have regatta caliber competition in both fleet and team racing. Both the Varsity and JV teams had winning seasons in a historically strong league, the V team finishing
with a 22-0-1 regular season record, and the JV team going 11-1.
The Varsity team continued their history of representing NESSA at both the Mallory and Baker regattas. The team finished 6th at Mallory, and capped an incredibly successful NESSA season with their third win in a row of the New England Team Race Championships. Finishing off the year was a trip to Anacortes, WA for the Baker Trophy where the team went undefeated, winning the event with an impressive 11-0 record to become National Champions.

Unlike many of the other HS sailing programs, SG does not offer sailing in the fall season. Yet SG sophomore John Kirkpatrick finished 2nd at the New England Single-Handed Championships and represented St. George’s at the Cressy finals in the Full Rig.
NESSA also supports a Women’s Championship, known as the Herreshoff Regatta. This year, the SG women won their regional qualifier with a sophomore and a freshman skipper and went on to finish 4th at the finals. This same team later represented SG at the Rhode Island State Championships, winning B Division and finishing 3rd overall.
Challenging early season conditions in Newport in March and early April make this team work hard six and sometimes seven days a week in the most miserable weather, and yet I rarely heard a complaint. Instead, the regular reports were of how much learning was going on each day due to the strength of the group as a whole, and the continued guidance and watchful eye of Coach Williams. While the team has been lucky to have several standout sailors over the years, it is the combined strength of the team as a whole and the
incredible depth of the group that has allowed its continued success.
Sail1Design supports high school sailing, because it is where future great one-design sailors, in may cases, are made. We are proud, with the help of KO Sailing, to present this award annually to the top high school sailing team in the country. Our panel of judges looks at the entire season of district events, and of course, the Mallory and Baker National Championship results. To win this award, at a minimum, the team must qualify for at least one of these events. We also look for participation in the Singhlended Cressy National championship in the fall. Finally, we encourage written nomination submissions. This award is presented annually, in June, after the preceding year’s full high school sailing season.

Says Mark McNamara, president of KO Sailing, “KO sailing is a major supporter for competitive sailors between the ages of 8 and 18, helping them to compete at the highest level. To us, the High School Team of the year award is a perfect way to recognize those teams for their success and achievements in their respective elements. There is a great synergy between what KO Sailing is doing on the ground, and at events, in support of what these recipients have achieved. This program is just a great way for the country to recognize those sailors as they grow. Sail 1 Design, with their expertise and as the information resource for all things one design, is the only team to work with.”