The 2018 Etchell World Championship concluded this past Saturday. 94 teams competed to prove who was the best in the world. The Royal Queensland Yacht Squadron in the Brisbane suburb of Manly, hosted the championship which kicked off on Sunday, October 21st and finished on the Saturday the 27th.

Day 1: The feeling on shore was that the day was going to be grand. But once competitors reached the sailing area out past Green Island, the 8-10 knots from the southeast that had been gracing the Royal Queensland Yacht Squadron in Manly were nowhere to be found. With light wind direction varying from 010 to 110 degrees, it wasn’t a surprise when the postponement pennant was raised before midday.

With the postponement in effect, the crews were trying their best to avoid the gazing sun by taking refuge in whatever shade they could find. The breeze decided to show around the mid afternoon with 12 knots, the prospect of two races for the day had past and only once race was scored the first day. The right of center side of the course proved to be the place to be going upwind on the 2.5 nautical mile haul to the windward mark.

The first race went to Havoc, AUS 1461, skippered by Iain Murray, with Grant Simmer and Richie Allanson aboard. After the racing Murray said, “It is nice to start the regatta, and sail well in the first race. There are a lot of anxious people out there so getting a good start and first beat to windward, where you can find your rhythm without too much angst is a great way to begin a campaign. We have been working hard on our trim in the last couple of days with our coaches. We have found an easier way to sail the boat, which allows us a little more flexibility in the waves, and not as cranky boat as we’ve had in the past.”

Reigning World Champion Steve Benjamin, with Michael Menninger, Ian Liberty, Jonathon Goldsberry, on board Stella Blue finished 18th in the first race. Benjamin said, “The race course was absolutely perfect. The race management was spot on, and they waited just the right amount of time to get the race away and it was dead true.”

Day 2: The ultra-light and variable wind at the beginning of the regatta posed a challenge for the race committee who wanted to do the best job they could in making sure they got the racing in. Nine races in total would be ideal, seven makes for good times, and six is acceptable for the championship to count.

With another postponement, it was clear that the day would only have one race. With wind settling in at 12 knots, the longer Course 1 was chosen, which adds an extra leg with an upwind beat to the finish. Though the conditions weren’t cooperating as hoped, it did not deter the competitors enjoyment. War Canoe, USA 1363, skippered by Michael Goldfarb, with crew Morton Henriksen and Skip Dieball are in 12th place this evening scoring a 14th and a 18th place. Goldfarb said, “We are so psyched to be here. It is an amazing place to sail. It is a big, open piece of water. It’s also really exciting, and there are so many boats. It is also a difficult and challenging stretch of water, so in combination with all the great sailors that have amassed here, well, there is not a lot of room for mistakes. We love it here, and appreciate all the hospitality. The Royal Queensland Yacht Squadron is fantastic.”

Day 3: The third day looked like it had a great chance of getting both scheduled races in. With the plan being that the 94 boat fleet sail the shorter course, Course 2, to save some time. The first start saw a U Flag and after a general recall in the second race, the race committee went to a Black Flag. Unfortunately, both races claimed victims and the bar saw some sailors much earlier than anticipated.

The first race had a steady 10 knots with the tide running from South to North. Unlike the first days race, starting left was favoured, but you did want to cross back early, and not end up near the islands, for this put you out of the game. Those that did mentioned above, slaughtered those coming out from the right. The second race was positioned closer to the Yacht Squadron and the shorter Course 2 was run with a range of 2.3 nautical miles.

It has to be said that consistency pays off in racing. Many of Etchells regatta champions have been won without the winning boat having a first place finish in any race. Such was the case after the second day of racing finished with Mark Thornburrow, Mike Huang, Alexander Conway and Will Ryan on HKG 1406 leapfrogging over Lisa Rose who held the top spot last night. A fourth and a fifth place today gave them a five point spread over the second place crew.

“It has been great and the biggest thing, which applies to all the Etchells, has been the sharing of information. The skill is there, so it really has come down to getting used to the big fleet. So it is about trying to manage that, and also the tide flows. We have been paying a lot of respect to the latter, so are really happy to not have been pinged, so far. There is plenty of space on the line, so it is about finding your lane and we really are having a good time.”

Day 4: Two races were conducted on the fourth day of racing. This brought the total number of races completed to six, which at minimum constituted the series. Everyone was pleased to have reached this marker and many thanks to the race committee team under the helm of the Wilson Brothers for this. Like in previous days, the U Flag was displayed in the first race, claiming a number of victims. The race committee decided to use the Black Flag in the second race and just one crew had an early visit to the bar after the start of race six.

Day 5: The fifth day of racing came with a nice 10 knots of breeze. But there was a catch, and that catch was the tide beginning to ebb from the full moon the night before. The massive tide caused the walkways to the floating marina to be almost an uphill walk to where the boats were. By the fifth day more of the international teams had worked out the tides which resulted in many more of them in the top places at the mark roundings and finishes.

Race seven got off without a hitch but race eight had to be abandoned after two legs. The fleet then asked if the start time for racing could be moved up for the last day in order to get nine races in.

Leading into the final day for the overall win, along with those for the Master and Senior Divisions, rested with Martin Hills skippering Lisa Rose AUS 1449 and crewed by Julian Plante, Sean O’Rourke, and a talented local sailor by the name of Mat Belcher, who can draw upon his eight 470 World Championships. Hill said, “It is so difficult, with the long 1.2km line here, and just a shift on that first leg can give you 15 places before you know it. Get on the right end of that and it is great. The wrong end, and well, it is hard to pass 40 boats.”

Lisa Rose held a three-point lead over second place Gen XY, with Racer C seven points behind them. The Corinthian Division is by far the biggest in the fleet with over 50% of the armada contesting for this most coveted of trophies. The Corinthian leader was in 16th place overall, with a Black Flag from the third day of racing really hurting them.

Final Day: A classic mix of sun and just enough wind for the last two races characterized the final day of racing. Teams assembled on the race course for the earlier start with breeze from the southeast at 7 knots. The shorter Course 2 was selected and the first race would go to the leader, Lisa Rose skippered by Martin Hill, but the racing wasn’t over. Race two got underway with the breeze building to 12 knots. With the moved up start time, race committee was able to run the longer Course 1 for the last race of the championship. Villiam Voermann, Lucas Down and Gary Van Lunteren on Triad took the final race. Voermann said, “A good clean start, and a textbook race with fast boat speed were essential. We played the shifts as well, as there were a couple in the first half of the first work to windward. So we stayed in phase, and kept mostly to the middle and ultimately it opened for us. The tide also dragged us up to the weather mark, as it began to ebb.”

The popular Iron Lotus crew of Tom King, Ivan Wheen, David Edwards and Greg O’Shea finished 13th place overall, making them the top Corinthian team, with a 49th place as their worst result once their Black Flag had been discarded.

The Grand Masters was won by John Bertrand, with Noel Drennen and Ben Lamb. The top female helm was Jeanne-Claude Strong who apart from collecting a race win, also finished in 20th place overall with her crew, Seve Jarvin, Marcus Burke and Jen Danks.

Chairman of the organizing Committee, David Irvine, was a proud man at the end of the final day. “Who would have thought around five years ago when we decided to go for it that we would be standing on the deck now, with just presentations to go, which will be my last official duty. In addition to the turnout, I think the conditions have been another highlight. We concentrated on giving people the best regatta we could on the ground, and the vibe in the boat park has been great. My back is sore from all the pats, and my right hand from all the shakes. That’s the best news, and I am very humble and very proud to be associated with this regatta.” In closing Irvine also said, “The number of people involved has been phenomenal. Today we had 27 people out there on start, mark, and safety. We had to make more shirts for the entire group, and it was in excess of 160. Their efforts equate to well over a thousand hours too. It is fantastic for the club, as well as the class. The Wilson brothers have been fantastic, and none of it would have been done without the committee that arranged it all.” 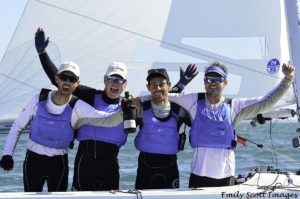 The 2019 Etchell World Championship will be held in Corpus Christi, USA and the 2020 in Perth, Australia.