17 June 2018, Annapolis, MD — Sail1Design has been lucky to be part of some great moments over the years, mostly when we do our job, and take part in recognizing youth, high school, college, and one-design sailors. Reading nomination letters, hearing from our community about unsung heroes, sharing in the joy of the winners…… makes the whole Sail1Design project, now 11+ years in the making, more than worth it.
Remember, we only choose candidates from nomination letters sent in, so we sit back, and take what we get. This year, we were faced again with narrowing an incredibly deserving field. Not easy. In fact, we almost couldn’t finish the job. Two candidates stood out, for different but equally compelling reasons. After going back and forth, and at first considering having two winners, we settled on one. This year, the S1D/Gill Coach of the Year Award goes to Scott Iklé.
Scott is the Head Intercollegiate Coach at Hobart/William Smith, a position he’s held for 25 years. His roots there go 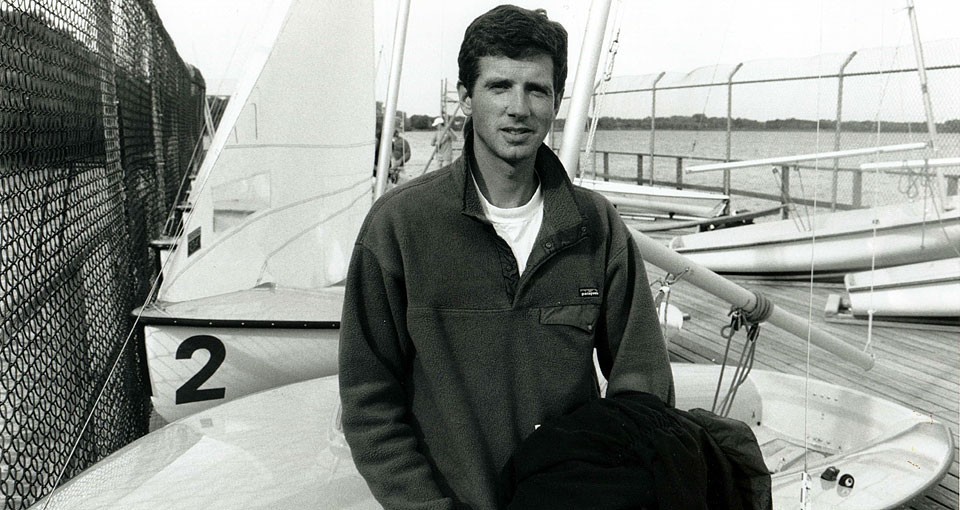 even deeper, however, as Scott is a 1984 graduate of the college himself. Scott is a full-time, lifetime professional contributor to the world of competitive sailing, and is a standout sailor himself. He’s been worthy of an award like this for a long time, so we are elated that he was nominated. Scott has been incredibly successful over the years at Hobart/WS, and while this year the team didn’t win any of the big ones, we fell in love with his nomination letter, which came from one of his players. I think the part that touched us the most was the fact that he was nominated by one of his players, along with her “meet us halfway” description (see letter below) to show us his dedication to their team. Scott’s collegiate team’s results this year were pretty incredible as well, across the board. While most college teams would kill to be in the top 3 of any of the National Championship events, Hobart was there in all of them: 4th at COED Nationals (3 points out of 2nd), 3rd (tied for 2nd in record) at Team Race Nationals, and 3rd at Women’s Nationals. That’s pretty impressive stuff for one team, and this across-the-board average finish place at the three 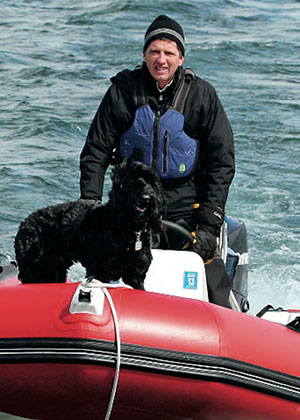 National Championship events was bested only by College of Charleston. Congratulations Scott, and well-earned.

Thanks to our sponsor, Gill NA, our winner will receive an embroidered, beautiful Gill Race Series Softshell Jacket. Below is some copy taken from the nomination letter Scott received. What a tribute.

Coming into college, I wasn’t sure I was going to have the skill or courage to make it past even the first day of try-outs for the Hobart and William Smith Sailing Team. But here I am today, newly graduated from HWS after spending all 4 years with the sailing team I’ve called home grateful for every second I spent here.

To us, Scott really knows how to connect to everyone on the team.  Scott knows what every person needs to push them to the next level.   Scott also is not a coach who will pump your ego, but he will ensure you that you are able and have the potential to make things happen…  Scott is willing to go that extra mile for his team, to meet them halfway. This year at Old Dominion University, Scott quite literally met us halfway, wading waist deep in the water to be eye level and connected for our “between set pep talk” (that’s a huge feat, for

those of us who know that Scott wears two pairs of spraypants at practice).  He knows when to push, and when to let go and let us shake off the bad race, helping us get ready for the next one. ….Scott has this unique ability to understand what his sailors need, whether it be in his office on campus, hanging onto his rib after a drill at practice, or standing onshore in between sets at a regatta.  In my four years at HWS, Scott has taken a team of the most unlikely people, who in 2015, did not qualify for any ICSA Finals in Newport RI, to being a strong cohesive team that placed 3rd in Women’s Finals, 3rd in Team Race Finals, and 4th in Coed Fleet Race Finals.  To all of us, Scott has proven to be so much more than just a coach, but a mentor, someone we can learn from while cracking some jokes along the way, but most importantly, someone we can confide in.  Scott has made Bozzuto Boathouse and the HWS Sailing Team an eternal home for his team.  And although Scott would probably deny this (being as humble as he is) I truly believe there is no person more deserving of this award than Scott Ikle.