Antigua– Chosen by virtue of their top finishes in the USODA Team Trials this past spring, American sailors Tommy Sitzmann, Samara Walshe, Jack Redmond, Gil Hackel, and Thommie Grit traveled to Antigua for the Optimist World Championship with high hopes and energy. Despite a few race wins and some examples of 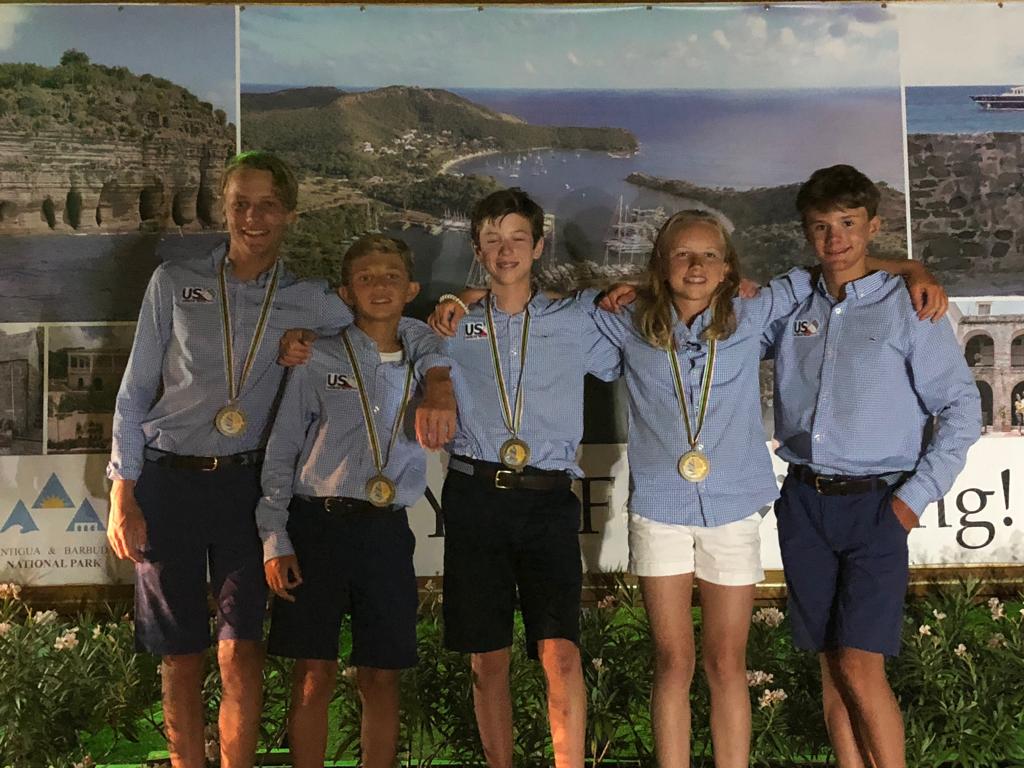 outstanding sailing, this year’s team struggled to solve the Antigua wind/current riddle, had some bad luck here and there, and as the regatta wore on, other teams found more consistency and success. The US team did start out well, with 4 of the 5 sailors earning a spot in Gold fleet, which allowed the US team to take home 3rd place overall in the Nation’s Cup (an award for the top combined finishes in Gold fleet, requiring at least 4 members.) Bad luck for Gil Hackel: he became ill and had to sit out several days of sailing, likely due to food poisoning.
The team worked well together overall and of course made a lifetime of memories sailing in the Optimist Class’s ultimate event. Overall results HERE

From the IODA website:
A RESOUNDING win for Italy’s Marco Gradoni brought the 2019 Optimist World Championship to an end on Monday as the 15-year-old claimed the winning title for an incredible third consecutive year.

Competitors battled it out on the water in Antigua amid high winds and a punishing current in an intense day that saw elation for some and disappointment for others.

A small craft advisory earlier in the day saw the bronze and emerald fleets – which included the host nation team – relegated to the sidelines. The Antigua Meteorological Office had predicted gusts as high as 28 knots and waves up to three metres, causing race chiefs to cancel races for the lower two fleets.

But the weather was no match for Gradoni whose “perfect performance” propelled him to an electrifying finish, almost 20 points clear of his closest competitor.

“There were good winds of about 15 knots and a lot of current; I got two good races,” he said.

“I am really happy – I think the realisation will hit me more in one or two days.”

Already 15, this year’s competition was Gradoni’s last in the Optimist class, but he added that he hoped to eventually make a career out of sailing.

Italy’s coach Marcello Meringolo said: “Today was difficult because there were many guys who were very strong but Marco performed perfectly.”

A few false starts had increased the tension among the young competitors.

“That made it hard but Marco started very easy and free. They were perfect conditions for him and he got to the finishing line fast,” Meringolo continued.

“This is the third time Marco has been World Champion so he has written history for the Optimist class; it will be very difficult to beat that record.

“I hope he will continue with the sport and go on to the Olympics.”

The championship was a particularly proud one for Meringolo with Team Italy also securing first place in last week’s team racing.

“This is a story not just for Marco as an individual but for the whole team,” the coach added. 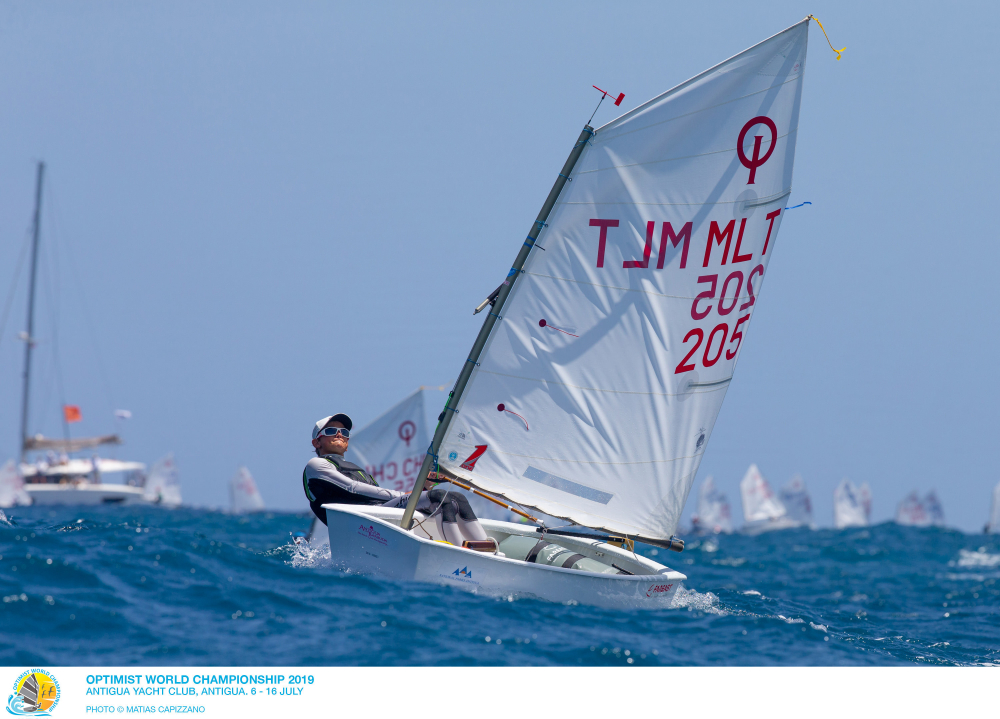 Malta’s Richard Schultheis, who had been in the top spot for the first two days of fleet racing last week, finished second.

“Today was the final day so I just tried to keep my position and stay on the podium. I did not push too much and I sailed safe,” he said.

Forging new friendships with counterparts from other nations is a central tenet of Optimist sailing, which is open to youngsters up to the age of 15.

“It’s been a really nice event with beautiful conditions, and everyone always together and having fun,” Richard testified.

He may be only 14 but this year is likely to be the last event for Richard too.

“I have sailed in the Optimists for several years and now I would like to move on,” he said, adding he hoped to venture into faster WASZP foiling.

“I am feeling great because I had really good results and I am really happy,” he said.

“My objective was to enter the top 30; I didn’t think I would get so high. It was quite windy and difficult today but I managed to finish well.”

Ayarza is now looking forward to next year’s championship which will take place in Italy’s Lake Garda.

“I hope to come next year and try my best and be in the top five. I think it would be really difficult to become a professional sailor but if I have the opportunity I will,” he added.

Spain saw additional success by claiming the top placed girl; Maria Perello, 14, finished in 25thposition in the leader board. It was her third consecutive year out-performing all other girls. Second-placed girl was Argentina’s Amparo Stupenengo in 27th position, and Turkey’s Okyanus Arikan was 33rd.

In fourth place overall was Turkey’s Can Erturk, 15, with South Africa’s Ian Walker March, 14, in fifth.

Gold, silver and bronze medals will also be given out, plus prizes for the first 20 sailors.