As one of the most highly utilized youth training boats in North America, the 420 was designed in the mid 20th century as a stepping stone for the Olympic 470 class (www.usi420.org).  Since its introduction into the youth sailing community, two popular variations on the design have risen to the forefront of modern junior sailing.  The Club 420 is possibly the most popular youth double-handed boats on the continent (closely followed by the Flying Junior, or FJ), and Collegiate 420 following suit as one of the most popular boats among collegiate programs in the United States.

The Boat: Club 420, Youth Sailing Staple
Throughout junior sailing programs in the country you will find various vintages of Club 420s with half a dozen popular manufacturers that have come and gone over the years.  Club 420s are everywhere, with nearly 8000 hulls produced to date.
Recently, the C420 North American Championships were held at Brant Beach Yacht Club in New Jersey and had a showing of 113 boats from yacht clubs and junior sailing programs across the country.  These ranged from Pleon Yacht Club in Marblehead, Massachusetts (the only youth run program in the country www.pleon.org) to San Francisco Yacht Club, Chicago Yacht Club, Larchmont Yacht Club and Annapolis Yacht Club to name several. 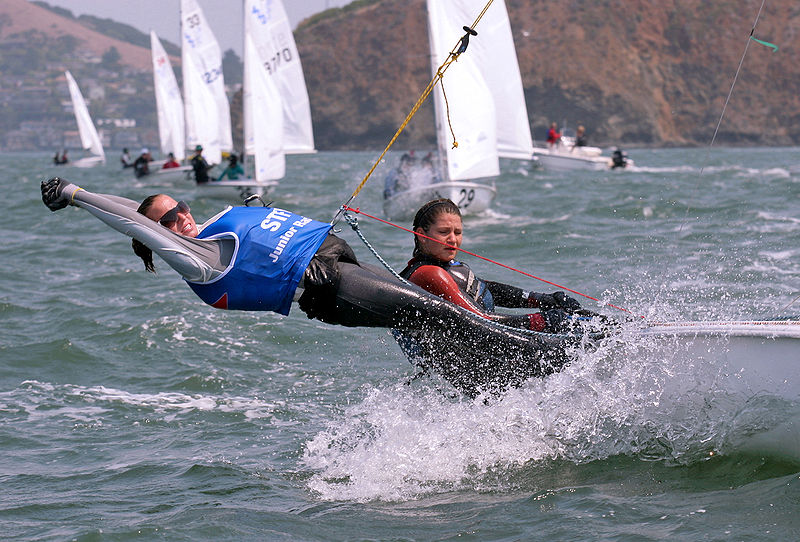 A youth sailing staple, most veterans of junior sailing or youth learn-to-sail programs have stepped foot in, crashed and inevitably capsized a C420.  Designed to be easy enough for beginner sailors to master the basics, yet fast enough to maintain the interest of budding All-Americans, the C420 is a mix of simplicity and technicality.  Weighing in at a modest 230lbs, the 13’9” long, 5’4” wide dinghy has a single trapeze, centerboard and has a sail plan (main and jib) of nearly 141 square feet (236 square feet with spinnaker).  Construction is glass-reinforced plastic (GRP) with an aluminum rig, metal side stays and Dacron main and jib.  Optimum sailing weight is around 270lbs for skipper and crew combined, although lighter or heavier boats can be just as competitive.
The Boat: Collegiate 420, College Sailing
The recent increase in interest in sailing as a collegiate sport can be attributed to several factors.  These include the willingness of student run organizations to fund sports clubs, the desire of schools to show diversity in their available activities and alumni donations making expansions of small teams possible.
Most teams exist on the club level with funding coming from these generous alumni, club sport governing bodies and athlete dues.  All of these factors require the involvement of as many students as possible, to become future alumni, demonstrate high participation numbers to governing bodies and encourage large numbers of dues paying athletes.  Thusly, many club teams thrive on introducing new sailors to the sport on a steep learning curve and encourage them to go to events on the weekends.
A boat for new sailors and veterans of junior sailing circuits, the Collegiate 420 is a stripped down version of the Club 420 in an effort to not overwhelm new sailors or school sailing team budgets.  No trapezes or spinnaker, a simpler mainsheet and heavier duty construction, the Collegiate 420 is a different animal than the Club 420.  Optimum weight is still around 270lbs however due to the inability to tune many of the normal rig adjustments, emphasis is put a lot on light, medium and heavy air crews to keep the boat powered up and flat.
Set-Up and Sailing: Club 420
Tuning the Club 420 is fairly simple with only a handful of adjustments to the rig.  The main areas of concern are mast rake, rig tension and mainsheet bridle height.  Mast rake is adjusted from the side stays where pins in the adjustable chain plates can be moved up or down accordingly.  Rig tension is administered by pulling on more or less jib halyard tension.  Because the jib has a contained luff wire, as tension is pulled on it takes up the tension from the forestay and tightens the rig.  Mast butt position, while adjustable, is never adjusted.  Bridle height changes the angle at which the boom is sheeted as well as leech tension while sheeting.  Reliable tuning guides can be found on the North Sails website (http://www.club420.org/PAGES/Library/tuningGuide.htm).

Upwind the C420 is very weight conscious.  This puts a premium on crew weight position in the boat as well as constant sail trim.  An oversized rudder makes over steering through maneuvers slow and violent.  In light air, the skipper and crew weight wants to be forward and together as much as possible.  It is important to get the boat moving well before trying to point high.  As breeze increases, the sooner the crew can get out on the trapeze the better; this powers up the sails and gives a very noticeable increase in speed. In full trapping conditions the boat will plane easily upwind and skipper and crew should work in tandem to keep the boat as flat as possible.
Off of the wind the boat is sailed best under spinnaker with the sail full and out in front of the boat.  Skipper and crew roles switch so crew can see the sail while skipper balances the boat and trims the main accordingly.  Medium to heavy wind conditions will allow the crew to trap while trimming the spinnaker, which are the fastest points of sail for the boat.
Sailing the Collegiate 420
Collegiate 420s involve much less set up than their Club cousins.  This comes to the surprise of many former junior sailors who are used to going through the motions of checking rake, tension and the myriad of other tasks associated with the C420 circuit.  Most college fleets are tuned to be identical in these aspects and changing them during racing is prohibited.  There is no bridle to adjust as well, so sheeting is done from a block mounted directly on the centerboard trunk; that being said, there are ways to power up and change the geometry of the collegiate rig. 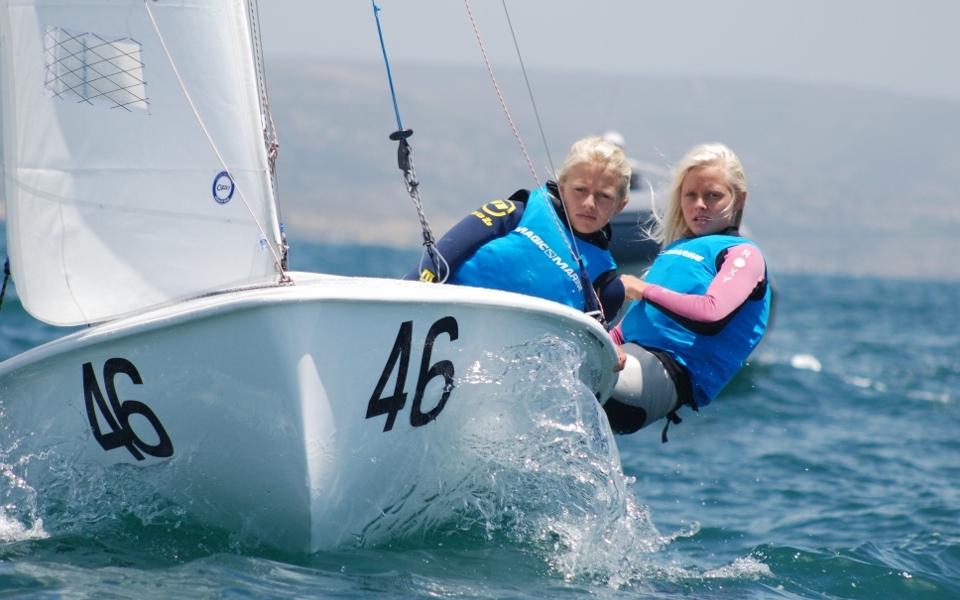 Because stays are fixed, mast rake can only be adjusted through jib halyard tension.  The luff wire in the jib controls the amount that the mast moves forward and back, something easily seen when initially pulling tension on the halyard.  Reducing the amount of mast rake, that is to say putting the mast tip more forward, involves pulling on more jib halyard.  Taking tension off rakes the mast back and reduces the power of the rig.
Sailing the Collegiate 420 is not much different than the C420 besides the lack of trapeze.  Crews must get out and hike as soon as wind speeds allow and skippers must drive the boat off the power of the main, which is significantly larger than the jib.  Collegiate boats are known for going through several crews over the course of a weekend regatta in order to optimize weight for the conditions on hand.  Heavier crews keep the boat flatter in more wind, lighter crews allow for hiking in less wind and reduce combined weight.  Off wind without the spinnaker is conducted by going “wing on wing”, which involves having the jib and main on opposite sides of the sail to optimize the sail area of the boat.
Class Associations: Leading the Charge
The C420 class association is large, active and has a very strong support system.  Because so many of the boats (nearly 8000) are being sailed today, most junior sailing events are conducted in private or club owned C420s.  Well organized championship events such as Nationals and North Americans attract hundreds of the top boats from around the country and across the continent.  A well laid out website is straight forward and helpful with calendars of events, classifieds and tuning guides (http://www.club420.org/).  It would not be possible for such a large and diversified class to flourish without the help of such an involved class association from regional to national levels. 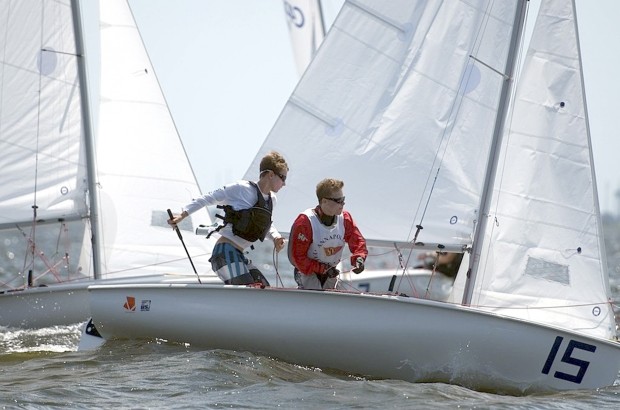 Collegiate 420s are sailed in, well, college, and the Interscholastic Collegiate Sailing Association is in charge of governing all college sailing.  It is comprised of current and former college sailors and coaches who meet several times a year to discuss events, regulations and policy.  Seasons run from early September to mid November, and again from January to June with national championships sailed at the end of each in six different disciplines.
Why Sail a 420? Rather, Why Not?
Of the limited number of youth training boats that are currently in use, what the 420 brings to the table is unmatched.  Affordable at under $10k for new boat with trailer, or under $6500 for a competitive used boat, the C420 provides many years of fast and fun sailing from learn to sail to national championships.  A large organized class association and the popularity of the boats ensures relevance in years to come and helps maintain value of the boat longer.  Additionally, because of the popularity of the Collegiate 420 in college sailing, the C420 prepares future All-Americans for success in the most competitive one design stage in the country.  The C420 is the top choice for youth trainers.