Annapolis Yacht Club is looking to hire a full-time High School/c420 Program Manager. This position is a year-round, full-time, salaried job, working with the other full-time coaches and Jr Sailing Director. For more direct information, and to apply, click HERE.

AYC is moving into an exciting phase in their long standing history as a world-renowned yacht club. Three years ago, AYC suffered a devastating fire in the main clubhouse and the clubhouse has finally been rebuilt and opened. Along with the new clubhouse, AYC has a 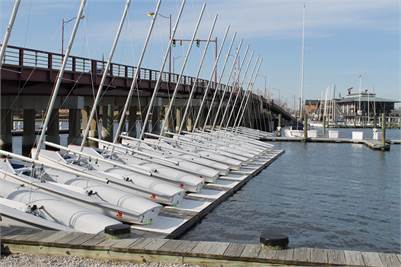 brand new, state of the art Sailing Center that will become the hub for all sailing activities has classroom space on the second floor that can seat up to 200 people. The club’s other new building, the Activity Center, has a dining room with seating up to 125 people with a fire pizza oven. The new building also has a pool, fitness center, fire pit area, outdoor bar area and flex meeting space to serve the club’s 1600 regular members and their families. 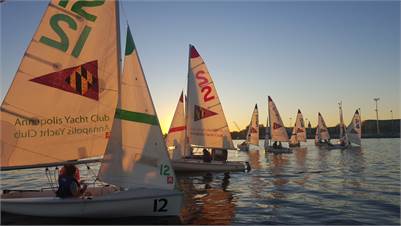 In 1904, the first records of meetings indicate a membership of 30. In 1910, the first wharfs were built, and the first club manager was hired in 1911 at a salary of $15 a month. Members began to acquire small sail boats and organize club regattas. These were uncomplicated affairs held on Memorial Day and Labor Day. Shell and canoe races started up Spa Creek at Old Woman Cove and ended at the Eastport Bridge. There were also swimming races and diving competitions. The club owned several single and double shells, two four-oared shells, and was given an eight-oared shell in 1911 by the US Naval Academy.

World War I and the depression slowed boating activities until the mid-30s. A hurricane damaged the clubhouse and the wharf was reduced to pilings in 1933 and it was difficult to keep the club’s quota of 100 resident members. By 1936, there seemed to be little interest by members in the club and changes were needed. With renewal in mind, in 1937 the Annapolis Yacht Club was incorporated and the first formal regatta (Annual) was held that year. The Fall Series first year was in 1940 with five boats competing. World War II interrupted organized racing, but in 1946 the Spring Series was started with three classes – 30 Square Meters, Stars and Chesapeake 20s. By 1948, Moths, Comets and Hamptons were also taking part. The Annapolis to Newport Race (Newport to Annapolis back then) started in 1947 and has been run every two years since. A dining room was added to the club in the late 1940s and in 1948, the first Smoking Lamp newsletter appeared as a single page mimeographed sheet.

Wednesday Night Races were the brainchild of P/C Gaither Scott. After seeing the Wednesday Night Races at East Greenwich YC in Rhode Island in 1958, Scott inaugurated midweek racing at AYC in 1959. No race committee, no prizes, no scoring but there was a picnic supper after sailing. “S” boats, H-23s, 5.5 meters, Bermuda One Design and Rainbows raced, but interest waned in the mid-60s. To correct this, smaller classes of boats were invited and in 1965 35 boats entered the series. By 1967 112 boats were taking part.

Frostbite racing began in the winter of 1962-1963. Seven Rainbows were the inaugural class with five short races a day, starting and finishing at the club. Gladiators joined Frostbite racing in the fall of 1963 and MORC made the third class in 1964. The first Hangover Bowl (New Year’s Day) was on Jan. 1, 1966.

A Need for Growth

By 1959, membership had risen to 1000 and a new club building was badly needed. This was opened in 1963, with the first deck left unfinished due to lack of funds. Frostbite and Wednesday Night Racing soon demanded more club social space, and the Skipjack Lounge was finished in 1969.

The land across the Eastport Bridge where the junior fleet building is now (Holden Property) was purchased in 1969. The junior fleet was established there and a new building for them was completed in 1995. In 1989, women were welcomed as members, and the White Rocks Marina property (now the Harborside Sailing Center) was added in 1990. The club’s first official one-design fleet, the J/22, was started in 1991 with a crane added to Harborside for launching of the boats. The clubhouse again underwent a major renovation in 1995.

More than a Club…

In December 2015, Annapolis Yacht Club’s Main Clubhouse at 2 Compromise Street suffered a fire. A temporary clubhouse was then opened, located at 12 Dock Street, where operations continue until the completion of the rebuilding of the Main Clubhouse. Simultaneously, work is happening on the Eastport side of the bridge to create a new Sailing Center and a Family Activity Center. Today, AYC is at full membership (1600 regular members) with very active social, racing, and cruising programs. Large international events such as the Star Class World Championship, Rolex International Women’s Keelboat Championship, and many North American championships are hosted every year at AYC. AYC is known worldwide thanks to the members who are prominent in participating in, promoting, and organizing the sport of sailboat racing, as well as those who opt to leisurely cruise the waters of the Chesapeake and beyond.