NORFOLK, V.A. (May 25, 2018) – Today was the last day of racing for the Sperry Women’s National Championship Finals hosted by Old Dominion University. The top eighteen women’s collegiate teams in the nation raced for the Gerald C. Miller Trophy and Boston College took the win.

Racing began at 10 a.m. in sunny, hot and humid conditions. Temperatures stayed in the 80s. The winds were from the south oscillating on the course around 6-10 knots. There were a number of general recalls today with the sailors eager to start and shifting winds. Racing wrapped up around 2:30 pm.

The sailors completed six races today in both divisions in FJs and Z420s on windward leeward courses with four legs for a total of 18 races in each division for the event. The conditions made for close racing as the wind shifts were big and there were big gains to be made, but also big losses and the fleet would split and condense on the course.

The Principle Race Officer for this event, Cara Vavolotis, did a great job managing the racing for all four days of the regatta.

Going into today’s competition the top five teams were close and Massachusetts Institute of Technology was leading the event ahead of College of Charleston. Boston College, William Smith College and Brown University were close behind and the U.S. Coast Guard Academy started to gain ground as well. The racing was exciting to watch today especially in the last set when Boston College, Charleston, MIT and William Smith all could have walked away with the National title.

In the last A-division race Boston College was over early and had to fight their way into the race. This gave Charleston and William Smith an opportunity, but Boston College’s B-division, Sophia Reineke (a new freshman skipper on the team) and Lily McGrath helped their team with a strong last set and closed the four point gap to take them exactly where they needed to be – winning a tie breaker with Charleston to claim the title.

William Smith College’s A and B-divisions both had a good last set which gave them an edge over MIT landing them a spot on the podium and winning the Ann Campbell Trophy for third place overall.

Sailing for William Smith College was Bailey Carter ’19 with Haley Okun ’18 in A-division and Katherine Cox ’20 with Sarah Warren ’18 in B-division.

“It was another day full of ups and downs,” says Mitch Hall, assistant coach for Charleston. “We were right where we wanted to be and our team sailed a great regatta, but the Eagles sailed well and fast.”

“We started to focus on BC and William Smith in the last races and not split from them, or try and take too many chances, but try and keep them in view,” says Hall. “But even when BC was down, they are fast and they caught up. But we also could not have asked for more than our women gave, they sailed well.”

Sailing for Charleston was Alie Toppa ’20 with Annabel Carrington ’19 in A-division and Paris Henken ’19 with Liza Toppa ’20 in B-division.

The Sperry Women’s National Champions and winners of the Gerald C. Miller Trophy is Boston College. This is the third time that the Eagle women have won this trophy, they took home second place at this event last year. 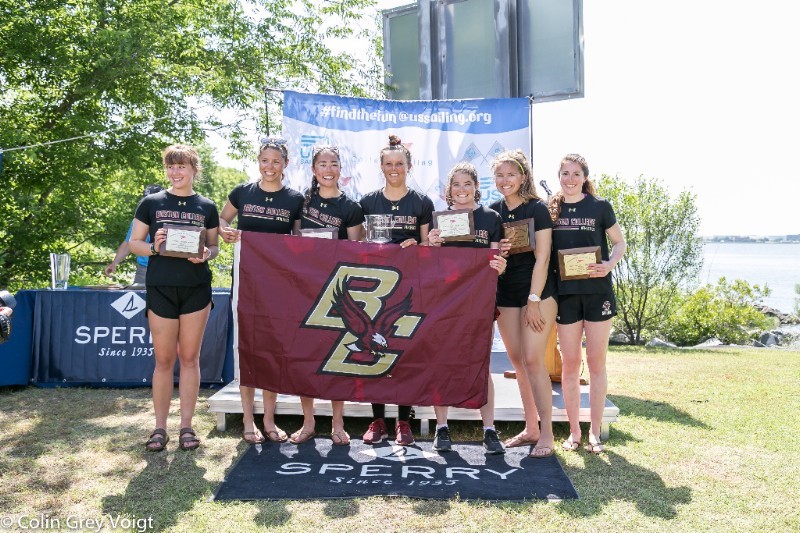 “Today went great, it could not have gone better,” says Greg Wilkinson, head coach for Boston College. “We continued to fight for every point and it worked. It’s something we have been focusing on, but especially at this event.”

“We wanted to eliminate the noise around us and focus on each race,” says Wilkinson. “Even in the last races, I doubt it felt good for the women [to be over early], but the only thing that mattered was sailing the boat in the next race, that’s what you have control over.”

Sailing for Boston College was Isabella Loosbrock ’19 with Emma Perry ’19 in A-division and Sophia Reineke ’21 with Megan Bamford ’18 and Lily McGrath ’18 in B-division.

After racing, awards were presented at the Old Dominion Sailing Center, for the top teams and also for the first place finishers in each division. Bailey Carter ’19 with Haley Okun ’18 won the Madeleine Trophy, awarded to the low-point A- division team. They finished with 79 points total, 25 points ahead of the second place pairing from U.S. Coast Guard Academy.

Louisa Nordstrom ’20 with Graceann Nicolosi ’20 from Yale University won the Judy Lawson Trophy, awarded to the low-point B-division team. They finished with 90 points, just two points ahead of the second place pairing from the overall winning school, Boston College. Nordstrom also won this award in this event last year.

Racing continues tomorrow with the LaserPerformance Team Race National Championship, which will take place over the next three days on the Elizabeth River in front of the Old Dominion Sailing Center. The top sixteen collegiate team racing teams will report for racing starting tomorrow at 10 a.m.

To learn more about the teams competing in all of the events and to follow the racing and results visit the event website: http://2018nationals.collegesailing.org/

Dan Egan, of Degan Media, will provide some live coverage during the events sponsored by US Sailing, streaming from the event website. Live coverage began May 25 for the final day of Women’s, and will continue May 27 and 28 for the final round of eight and final four of Team Racing, May 30 for last day of Gill Dinghy Semifinals, and both days of Finals May 31 and June 1.

Follow the events via the regatta app from US Sailing, learn how to sign up here: ICSA Nationals App

Additional social media updates will be available throughout the events on the regatta website.