In sailboat racing, there are several categories; handicap, one-design and development.  Handicap allows for boats of different designs to compete against each other using a rating system to calculate final times.  One-design racing uses boats of nearly identical design and configuration, and development uses a formula or box rule of different design rules to contain the ultimate product.  A case can be made that one-design has the most competitive racing, however it is development classes that have driven the evolution of the sport. 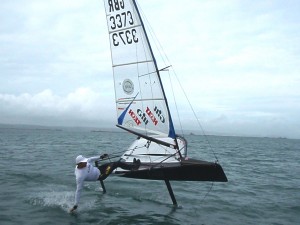 The Boat: Evolution
The original International Moth was the combination of two similar boats from opposite sides of the world.  In the late 1920s in Australia, Len Morris built a cat-rigged scow to sail at a resort near Melbourne.  Flat bottomed and hard chined, the boat was 11 feet long and carried 80 square feet of sail area.  The boat performed far beyond expectations and Morris built two more, giving birth to the Inverloch Eleven Footer.
That same year in America, Joel Van Sant built a similar boat with less sail area (72 square feet) and called it the American Moth Boat.  Gaining traction, the name was changed to the International Moth Class.  The Australians noticed similarities between the boats and changed the name of their class to reflect as such.  However due to the economic instability in the world caused by the Great Depression, no effort was made to join these classes and they developed separately for nearly 30 years (Classic Moth Boat Association). 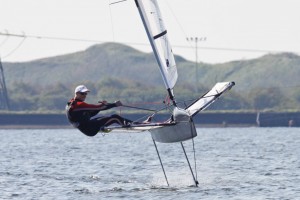 In the 1970s the class saw a revival and a bid to combine the US and Australian designs and class associations.  This proved to have mixed results as the class continued to grow in popularity throughout Europe and Australia yet sputtered in the US.
Since the merger of the International Moth Class Association and the Australian Moth, the boat has grown and changed into the freakishly fast machine it is today.  Ultra light hulls, carbon rigs, high tech sails and most importantly, hydrofoils. 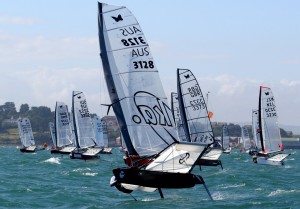 Set Up and Sailing: Lift Off
Being a development class, each Moth differs slightly with set up.  Once mast is stepped, the sail slips on similar to a Laser sail.  The boat can be laid down on its side as to not damage the foils.  This was seen a few times at the most recent Moth Worlds with the weather delays.

One of the new and most challenging parts of sailing the foiling Moth is height control.  The wand senses the height of the boat off the water and adjusts the lift on the main foil to bring the height of the boat up or down.  This can also be adjusted by playing with the angle of the foil on the rudder blade.  The altitude of the boat is initially adjusted by the trim of the boat, using the rudder foil for fine tune.
Once out of the water, or flying, the boat must be controlled using body weight adjustments and the rudder foil.  Sitting too far back will cause the boat to continually climb until it launches out of the water.  Sail trim also contributes greatly to control of the boat.  Because of the huge amount of apparent wind created by foiling at high speeds, controlling the power in the sail using vang and mainsheet is key.  More detailed information on getting the boat airborne and responding to different conditions can be found here (http://www.teknologika.com/mothblog/wp-content/uploads/Guides/sailing_the_bladerider.pdf). 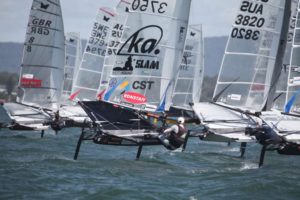 Class Association: Growing
The International Moth Class Association has had wildly successful World Championships the past few years.  They have drawn many of the biggest names in speed sailing to locations such as the 2015 Worlds in Sorrento, Australia.  With 79 boats in the Gold Fleet and 76 in Silver, this event was by far one of the most popular, from a numbers standpoint, of any one-design class currently.  The class is still gaining popularity in the states and a large cohesive body is still in its fledgling state with a Facebook group but no formal website.
Why Sail?
This should be a no brainer.  There is no more exciting and accessible boat in the world at the moment than the foiling Moth.  A big price tag may scare off most weekend warriors, and by no means is it a beginner boat, but for current/former competitive sailors with some extra money, there is no better purchase.
Learn more about the Moth:  http://www.moth-sailing.org