NORFOLK, VA (May 28, 2018) – Racing was completed today in the LaserPerformance Team Race National Championship on the Elizabeth River hosted by Old Dominion University. This is the second of three spring college sailing national championships. The top sixteen collegiate team racing teams in the nation competed for the national title and the Walter C. Wood Trophy and the defending champions, College of Charleston won the title.

The day began with a 180-degree wind shift; so racing was delayed but got started around 11 a.m. when the wind settled into a northeast direction around 7 knots. The winds stayed light and temperatures were about 80 degrees under cloudy skies.
Principal Race Officer Michael Collins kept the course running well all three days of the event. Along with the team of umpires, it was a great regatta with top-level team racing.

Going into the final four Charleston led the regatta; they were the leaders at the start of each day of the event. In their first race in the final four, however, they lost to Georgetown University. They turned things around for their next two close races and won them both to move on as the regatta champions.

“We are feeling good,” says Ward Cromwell, head coach for College of Charleston. “The top four teams were all really tight and our guys sailed really well. We were over early in the Georgetown race and Augie Dale [and Katherine Lounsbury] got us back in the race. They were our fastest boat out there today.” 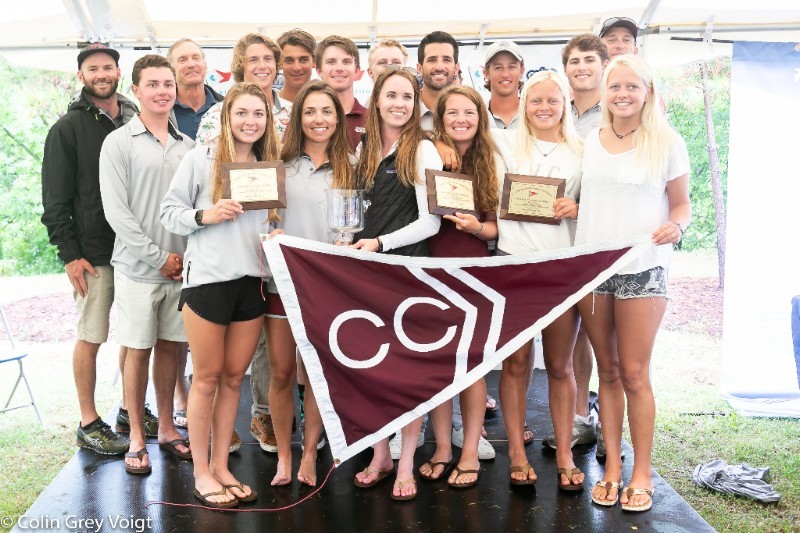 “I told the team if you get off the line, then no one can beat you – we have great boat speed,” says Cromwell. “We are stoked, they worked really hard all season and came together well. The team put in a lot of effort and we had great conditions in Charleston to practice in, and it was great to see the sailors peak this week.”

“We will have some fun to celebrate the win, but we will put our heads down and get ready for the Semifinals tomorrow and hope to have another four days off good racing,” says Cromwell.

After the final four racing there was still a three-way tie for second place. The sailing instructions called for a sail off for the podium finish. Hobart and William Smith Colleges, Roger Williams University and Georgetown University all had a 18-7 record.

The rainy weather and the light wind held on for some more racing in the sail-off. The three teams all fought hard for the remaining podium finishes and even after the additional races each team had one win and one loss, so the tie was still in place. The scoring reverted back to using points to break ties, but included the points from the sail off round.

Roger Williams finished in second place having sailed a very good event and made it out in front of Hobart and William Smith, who was in second place after yesterdays racing.

“We went out today and took it one race at a time,” says Sean Bouchard, assistant coach for Roger Williams. “We wanted to stay calm and keep it simple and mechanical. Easier said than done, but this is a seasoned team who has sailed together a lot and they were able to transition well with the races and the conditions.”

“We had the potential to win today and that was a great position to be in,” says Bouchard. “I am proud of their mentality, ability to bounce back and proud of how they sailed.”

“I am so incredibly proud of the team and how they have progressed over the last four years,” says Amanda Callahan, Roger Williams head coach. “They have an amazing chemistry – you can’t fake it, can’t buy it – they have been amazing to work with.”

“It was great sailing and tight racing – just what you want in a final four,” says Scott Ikle, head coach for Hobart and William Smith Colleges. “It was incredible that we went back to scoring off points after the sail off, but it shows how evenly matched the teams are and is a great testimony to how good they are.”

“Of course we wanted to do better, but we are proud of our accomplishment and it is a good way to end the year,” says Ikle. “It is an improvement from last year and to have a podium finish is great, there are plenty of teams who would have liked to be third. We did a great job and these top teams were great to sail against all season long.”

Georgetown finished in fourth place. They sailed very well with only one loss in the final four and the sail off round, but combined with their previous record they were not able to place on the podium.

To learn more about the teams competing in all of the events and to follow the racing and results visit the event website: http://2018nationals.collegesailing.org/