The Mid-Atlantic Conference single handed championship, the Carl Van Duyne Trophy was held at the US Naval Academy in provided boats. The top five finishers of the 18 boat regatta would move on to sail the national championship in Michigan, November 2-4.

A freshman, Leo Boucher of St. Mary’s college took the event in the late stages of Sunday, edging Thomas McCann ‘22 of Georgetown and Charles Carraway ‘22 of Hobart. Boucher started slow with 23 points after the first 3 races. However, Mr. Boucher recovered impressively, finishing in the top-5 in 11 of the final 12 races sailed, including three first place finishes. Boucher finished with 51 points. McCann and Carraway finished with 55 and 56 respectively.

Vir Menon ‘20 of Christopher Newport finished fourth and Carrson Pearce ‘21 of King’s Point finished fifth, capturing the final qualifying spot for the nationals. Notably four of the five sailors representing MAISA are underclassmen and career performers at the top of the laser class in America. Vir Menon is neither a underclassman nor a familiar face on top of the laser scoresheet. He has been trending up, finished 6th last year and 9th his freshman year and finally qualifying for the first time last weekend. It is clear that Mr. Menon has been working hard to be able hold his own with the likes of Boucher, McCann, Carraway and Pearce.

Charlotte Rose ‘22 of Jacksonville University finished first at the SAISA Women’s Single-handed Championship, besting Kelly-Ann Arrindell ‘20 of Charleston in the 5 boat, 10 race regatta. Ms. Rose is world class, the gold medalist at the 2018 Girls’ Laser Radial Youth World Championship. Last weekend’s regatta was Rose’s college single-handed debut and most would peg her as the favorite at the national championship in November. Rose won six of the ten races sailed and finished with 19 points to Arrindell’s 22. Both women advance to the national championship. College of Charleston represented 80% of SAISA Championship.

Gerald Williams ‘19 won the SAISA Men’s Single-handed Championship in dominant fashion, winning eight of the ten races and finishing second in the other two races. Mr. Williams of College of Charleston finished second behind his teammate and eventual Marlow Ropes Coed Sailor of the Year, Stefano Peschiera, at last year’s national championship and finished second behind Boston College’s Scott Rasmussen at the same event in 2016. This year, however,  Williams looks poised to take the championship in Michigan.

Christina Sakellaris ‘21 of Stanford won the PCCSC Women’s Singlehanded Championship over her teammate Sophia Sole ‘21. Sakellaris finished with nothing but top-2 finishes and Sole was close behind with top-2 finishes in all but one race in the 10 race regatta. Sakellaris finished with 14 points and Sole 18, 14 points ahead of 3rd. The two Stanford Women will represent the PCCSC at the women’s single-handed championship.

John Kirkpatrick ‘22 of Stanford won the PCCSC Men’s Singlehanded Championship with 14 points through 10 races, winning 6 of the ten races and second in the other 4. Upamanyu Dutta ‘20 from University of Southern California finished second and captured the final qualifying spot. Dutta had all top-3 finishes and won the 4 races that Kirkpatrick didn’t win.

Harvard University won the Sherman Hoyt Trophy, New England’s premier coed regatta last weekend. The Crimson finished with 137 points, 24 points ahead of second place Bowdoin.  A puffy, shifty event sailed all but one of the 11 races on Saturday. Harvard started Eli Burnes ‘21 and Lena Episalla ‘19 in A-Division and Henry Burnes ‘21 with Catherine Tang ‘19 in B-Division. The twin brothers sailed very similar regattas, finishing with 69 points in A-Division and 68 in B, both finishing with only 3 races outside the top-10.

“Saturday went through a few different phases of successful strategies, so we had to be on our toes and ready to adapt,” stated Eli Burnes. “First set was oscillations of about 1 to 2 legs long, the next couple sets had longer oscillations so most beats were persistent shifts. Next it got a bit lighter and getting favorable current on the far left side was the winning move,” continued Burnes.

“We had a few tough races (one race I fell out of the boat), but we stayed optimistic and knew everyone was up and down because of the tricky conditions. First half of the day we focused on getting on the lifted tack as soon as possible, even if we had to take some sterns. For the rest of the races our game plan was to go left, often going far past port layline led to big gains,” said Mr. Burnes.

“We had a great time at the event, and thanks to the race committee for getting off a lot of races on Saturday before the unfortunate conditions Sunday. Races were quite competitive and exciting given the tricky conditions. Thanks to Brown for hosting!”

Bowdoin finished with 161 points, led by a B-Division Alden Grimes ‘21 with Elijah Berger ‘21 and Alissa Chen ‘22 for the Polar Bears. Roger Williams had 165, rounding out the top-3. 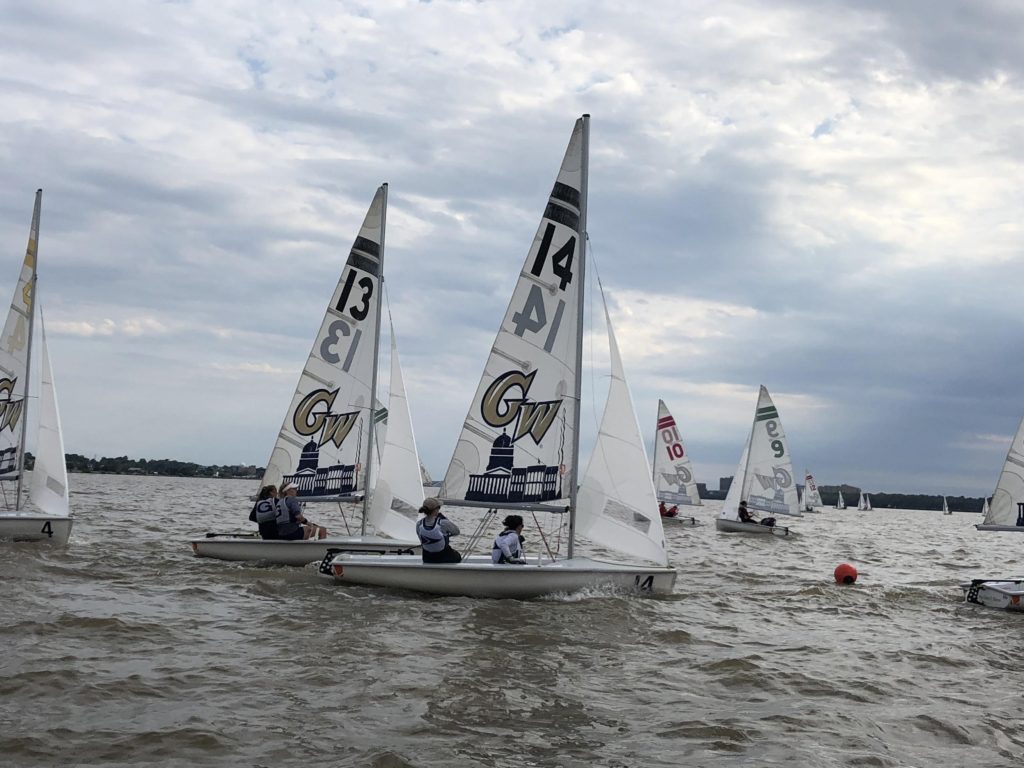 “The top 9 regattas, I think, were a success,” said Georgetown Head Coach, Mike Callahan. “I had hoped other teams would have sent their best sailors but the competition was good and we got a lot of racing in over a shorter amount of time.”

The Top-9 Regatta Women was sailed simultaneously and the other home team, George Washington University came out on top there, beating Cornell University 142 to 166 respectively. Aitana Mendiguren ‘20 and Sarah Moyes ‘20 of GW were the low point earner with 59 points in the combined division event. Mendiguren and Moyes finished in the top-5 in 11 of the 13 races.

The Seahawks of St. Mary’s finished 3rd with 226 points.

“My hope is that teams give the fall season a chance before we decide if its good or bad. At the end of the season we can all sit down and talk about what worked and what didn’t and hopefully we can work with each other to innovate,” continued Mr. Callahan

“The goal of the in conference season is to look inward and create better competition within your conference. MAISA has done that and the hope is more conferences will do the same. Instead of having the top sailors go to MAISA and NEISA for an interconference event, in MAISA we have tried to do this through new events like the top 9 which has the top 9 coed and women’s teams competing on the same course – allowing one coach to coach both events. We are also experimenting with having more boats per team sailing. The end result will be more sailing from more sailors over a shorter time with less travel. The goal for the interconference season is to have great interconference events. Interconference regattas had become so commonplace that the level of competition was watered down.  On a given weekend there would be a few top teams at one event, a few at another and then a few would have qualifiers in their own conference.  The new schedule has showcase events which will have the best teams in the country competing and the hope is the level of the regatta is better than a normal interconference. There will also be regular interconference events. The season will end earlier due to the 18 week season limit so the for MAISA and NEISA the season will end with the conference championship. The post season will be only the Singlehanded and Match Racing National Championships. Some conferences will continue to sail regattas or at practice but the main part of the season will be over the last weekend of October.”

Dartmouth won the Mrs. Hurst Bowl, sailed the weekend after the regatta namesake, Mrs. Hurst’s 93 birthday. The Big Green impressed on home waters beating the field by more than 50 points as second place Brown finished with 127 points to Dartmouth’s 74.

The spread was largely attributed to a dominant performance in B-Division by Emma White ‘19 with Lisa Genther ‘19 and Paige Clarke ‘20, who won their division by 19 points in only 11 races sailed. White, Genther and Clarke only scored 2 races outside the top-3, two fifth place finishes which was especially impressive given the extremely shifty conditions, natural to Lake Mascoma.

Head Coach, Justin Assad had this to say of the victory:

“We have had consistency in our women’s team players for two full years now, with some small changes in the crew positions.  These women have bought into the process and pushed themselves hard to be where they are.  They know their potential is great, but expectations can impede their progress so they do a great job of focusing on the steps of improving every day.  Most importantly, they recognize that the year is young and to keep improving we will need to turn this year’s weaknesses into strengths.  Of course, it is special to win at home, and especially the day after Mrs. Hurst turned 93!”