The competitive spirit innate in all types of sailing is truly no exception at women’s regattas— every talented team projects unmistakable focus and determination an effort to to dominate the other teams. Off the water, spectators and parents alike have often noted that the overall environment t women’s events is composed of calmer sailors, seemingly exhibiting less hype over each rotation and each start watched from the shore. However, at the collegiate level especially, the calm of women’s regattas is traded time and time again for strong sailing and competition the moment the boats leave the dock.

Over the course of four days, women’s college sailing teams from all across the country traveled to San Diego to compete for the national champion title after battling it out in separate eastern and western semifinals. During the finals on Thursday, the conditions were as variable as the results— the morning began with a light, shifty breeze that put most teams’ scores all over the place. However, throughout Friday’s equally light conditions, the U.S. Coast Guard Academy managed to secure a strong lead over its competitors and never dropped a place after that.

Many of the female sailors we questioned reiterated their advice to young girl teams: the key to getting high ranks on the scoreboard and remaining there at any championship event is focusing primarily on consistency. In a high-scoring event such as college nationals, with eighteen races for both divisions, each team is bound to end up with some undesired races regardless of skill level. Keeping errors to a minimum and not allowing the weight of such an important event to facilitate these mistakes results in success for teams. As an example, the U.S. Coast Guard Academy and Brown University both managed to capitalize on the power of consistency, ending with a fairly strong lead over the fluctuating teams below them. 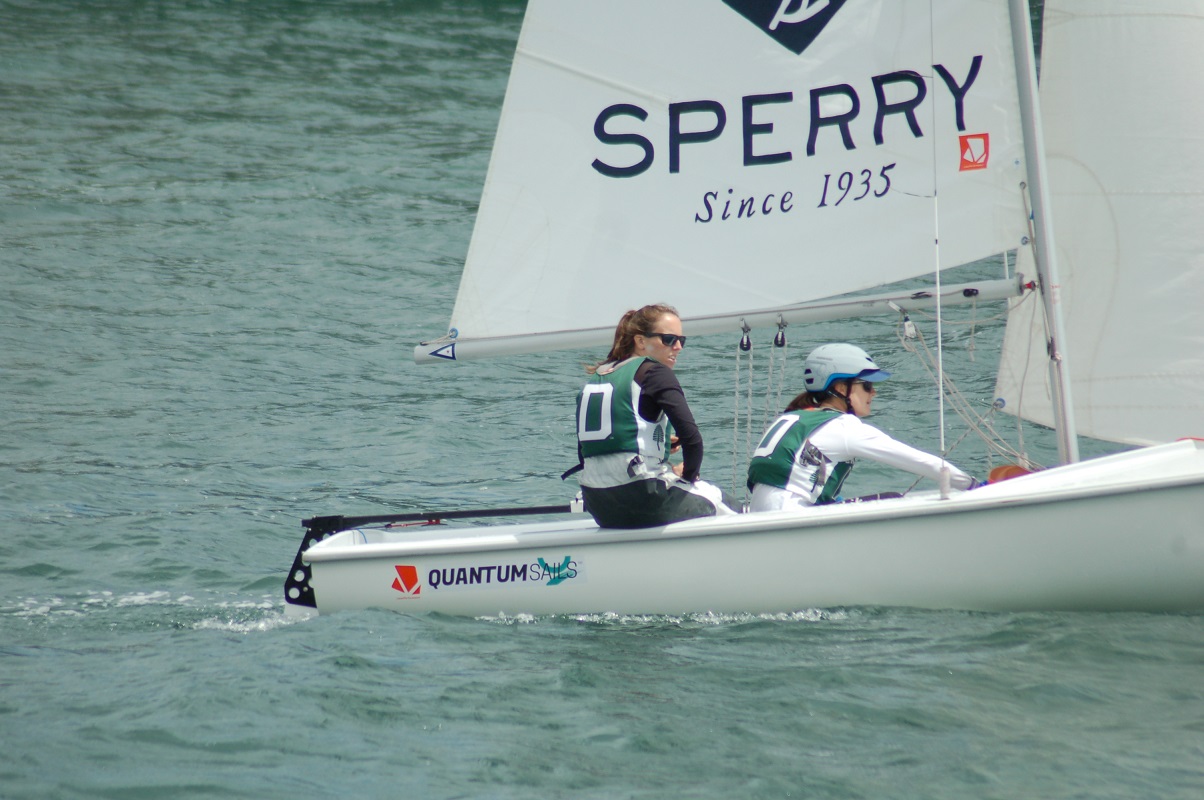 Many women made clear that the Sperry Women’s Championship event and women’s events in general prove to be some of the most rewarding experiences of being on their teams. Hope Wilson, a graduating senior on the Dartmouth sailing team, had time to reflect on her years on the women’s team. Hope said “My favorite part about being on this team is definitely the people. We have such an awesome group of people who are always excited about getting better every day, so it is hard not to have a good time with all of them.” Hope later reflected on the laughs shared within the women’s team and the irreplaceable experience women’s sailing has been for her.

Although in high school and college sailing the majority of girls still tend to crew for male skippers, the support and domination of girls in the sport of sailing has increased significantly in the past few years. Youth regattas such as the Junior Women’s Doublehanded National Championship, commonly referred to as Ida Lewis, draw women club 420 sailors from all across the nation as well as renowned coaches. Likewise in coed i420 events, the girls consistently manage to beat the male teams. At the 2015 i420 North Americans, Youth Worlds competitors Christine Klinger and Victoria Thompson won the event over the best i420 male teams in the country. With the women’s teams gearing up for the Olympic Games in Rio, the admiration and support of young girl sailors continues to rise.

So, it is evident that people may comment as to how the girls teams tend to stay reserved and calmer while on land. But sailors know well that how the wind blows on land often differs in intensity from a windier breeze out at sea. Girl teams in the sport of sailing never fail to rise to the challenge and race extremely competitively whether in coed or all-girl regattas, and the College Women’s Nationals is proof of that.
About the Author
Sammy Pickell, West Coast/High School Sailing Airwaves Reporter

Sammy started her sailing career at age five in the “Starfish” program at Bahia Corinthian Yacht Club (BCYC) in Corona del Mar, CA. She raced her first regatta at seven and was soon Sabot racing throughout Southern California. Sammy graduated from Sabots to C420s and CFJs, club racing for BCYC and as a varsity member of the Corona del Mar High School Sailing Team, where she helped the Team win the 2016 Pacific Coast Championships.  Sammy is a volunteer coach at BCYC, aspiring doctor, and rising junior at Corona del Mar High School. You can reach Sammy at [email protected]