By Andrew Kerr
Picture yourself on   port tack, going fast – with a wall of starboard tackers coming at you that you can barely see but you know their bows are charging at you!
Your team communicates well and is all on the same page, you cross the first 3 starboard tackers and then do a smooth duck on the last one before tacking on to the lay line for the weather mark. The whole situation seems almost routine – why? One strong element is that the team was communicating well as each team member was apprised of the situation and their subsequent role in it.

In particular – new teams, boats with new crew and teams that haven’t sailed together for a while would be well served to sit down together and talk about the communication / terminology that all on the team can quickly understand in the heat of competition and implement and execute with.
I typically sail with a wide variety of teams in a fairly wide variety of classes and have found it helpful to ask the team I am sailing with what type of and how much communication they like.
It is particularly important to get on the same page terminology wise – for instance needing to communicate that we need to go faster might be termed “ bow Down fast forward” by one person, “bear off” by another, “ foot mode” by another and so on!!
There essentially is no point communicating things the skipper doesn’t understand! Have you ever noticed sometimes that a team goes silent after a bad start and is fighting it out in the back of the fleet on the first beat? If you recognize this trait in your team, then now is the time to try and change it – be the one to start prompting the team to communicate – whether it be puffs, angles, waves or looking for lanes and opportunities, it gets the team back in the game and before you know it you will be passing boats and getting back in the race.
The trick is to all agree on the terminology so there is no misunderstanding. One of the
Challenges of good communication is formulating way’s to get across your observation / idea to the rest of your team in the most efficient and understandable way. Let’s look at a suggested communication model for a five person J24   that also can be applied to other boats as well.
Imagine you’re self on the rail as tactician trying to describe to the skipper how your team is doing against 20 or so boats that are to windward and on the same tack.
Here is a suggestion – divide the fleet into thirds – the initial (closer) third, the middle third and the top (most windward) third. The communication would go like this:  “Initial group is bow down, middle group is bow even and the top group is bow up” That may be followed up by an overall performance analysis of – “it’s net gain/net even/ net loss to us”.  Now like all the management courses tell you – if it is a net loss then we need to bring a solution to the table rather than simply present a problem! No need to kill the messenger here! 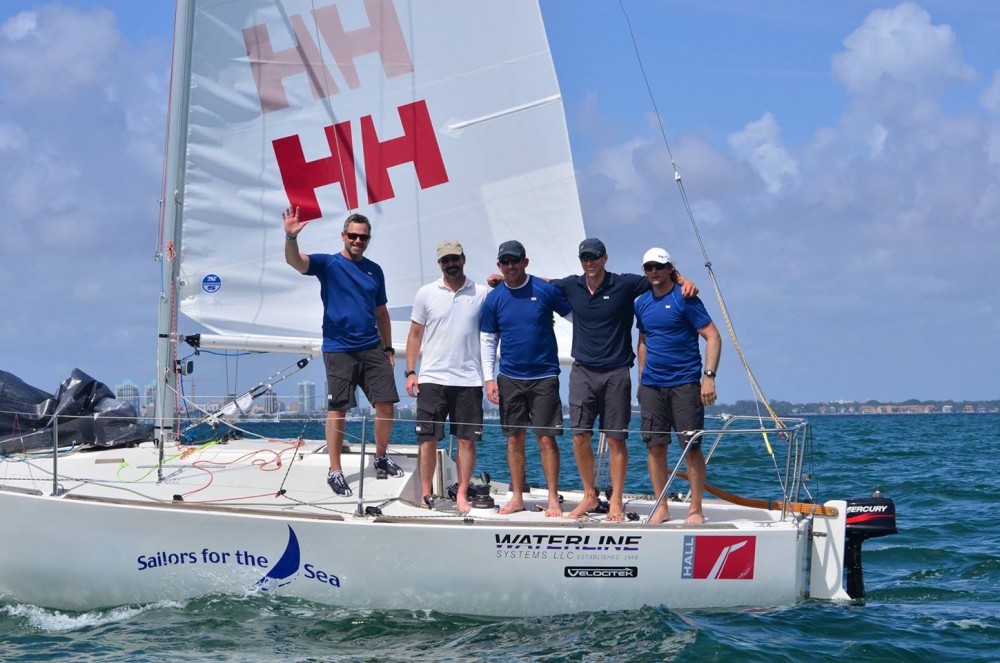 That reason may be that they have more breeze, a favorable wind shift or could simply be going faster. If the latter – why? Look at their set up – pay particular attention to the other boats forestay tension & Genoa halyard tension and how much backstay they have on and compare it to your setting  also note what mode of sailing are they in – “ a fast forward bow down mode or a bow up height mode.
Let’s break the race down in to segments and look at the basic communication roles that each team member has. We will assume that the tactician/ strategist in this example are the middle person.

At the leeward mark – Negotiate early!
In observing big fleets round the leeward mark one of the hallmarks of a disciplined fleet are very few protests and the fleet rounding in single file (bow to stern) and not blocks of boats rounding on the outside.
This year I watched some of the races at the UK J24 Nationals and observed some excellent mark roundings with very few protests, the hallmark of a good caliber fleet.
To me this indicates teams who have negotiated their overlaps or lack of overlaps early and then have focused on the best rounding possible.
Important note here is that most of the time it is better to round behind someone with clearer air and the option to tack rather than outside them, in bad air and with little or no option to tack.
Good communication approaching the leeward mark would be for the skipper (or your designated communicator) to start the dialogue early with the skippers of the other boats – “# 52 we are overlapped, #77 no overlap “etc.
Now obviously this can change later on but what you have done is opened up the dialogue to reduce the potential for late mis understandings.
Keep the process going:
The bulk of this article is suggestions on your team’s communication – the composition and style of each team is different so the communication channels   & content may be different.
I have found that you just cannot get too good at this, there are always’s better, more concise way’s of expressing observations in a concise and understandable way, I try to come up with new ways as much as I can both in my role as a coach and in my own sailing.
The important thing though is that those channels are open and that the team has established a foundation so that everyone is on the same page with the type and amount of communication that is required for each scenario that you meet on the race course. Very best of luck at your next regatta.