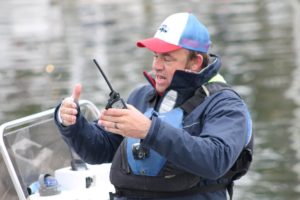 The sailing programs at the South Carolina Yacht Club in Hilton Head have been turning heads in the past few years. Record numbers of juniors are participating in the sport of sailing in the area and the programs have obtained national recognition. One of the big factors for these strides forward belongs to the leadership under the director, Mark Newman. I decided ask Mark about himself and the program he is having success building and running.

How long have you been involved with sailing programs?

What boats did you sail during your junior years?

I first started in a sunfish at age 8 while at Keuka Yacht Club. At that time it was the only type of boats we could sail. I gradually moved up to full rig Lasers at age 12 as well as crewing on a family members Escow with another 12 year old kid. We “12 year olds” and Betty and George Welch took a gamble on us as trainable. They purchased a new boat in 2001 to replace the 1985 “Non Sequitur” with the notebook rudders. This new boat was our reward for staying the course and learning the boat. 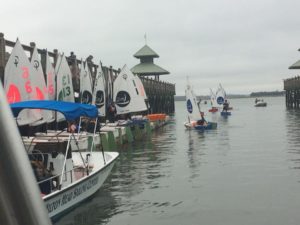 What boats have you sailed since and what are you sailing today?

I have sailed countless boats from Wayfarers, Lightnings, and Escows at Keuka Yacht Club in my youth, to collegiate sailing at Christopher Newport University on the Varsity team during my undergrad. Then for the first time, keel boats at Hampton Yacht Club on Wednesday nights on a C & C 99, J36, J24, J105, Colgate 26, and then finally becoming part of Vortex Racing semi pro team as crew development personnel on their J70 program.

What other program experience did you have before taking your current role at SCYC?

I was a high school teacher at Woodside High School in Newport News, Virginia. A degree in teaching helped me recognize and adjust to different learning styles, this helped tremendously with alternative methods of coaching to promote and achieve progress on the water. I have been lucky to use each of my previous positions as learning opportunities to get to where I am now. Dan Winters, a sailmaker and the coach for Christopher Newport University would tell stories of his youth. Sailing the Down the Bay Race from Annapolis to Hampton in a J24 or a Morgan 24. He will talk about the great sailors whom he competed against the Flying Dutchman class at the Pan-Am games and other great championships of the past. The most useful word of wisdom from Dan during my four years at CNU, “Gosh darnit, stay in the damn channel.” If you have ever been to the CNU sailing center off Deep Creek on the James River , always remember to stay in the channel.

What were the biggest challenges you inherited with the program?

The biggest challenge that I have faced here in Hilton Head is the fact that no one on the island prior to when I arrived knew about sailing or the South Carolina Yacht Clubs existence in respect to sailing. We have taken huge steps to launch the SCYC name, burgee, and brand onto the national stage. We did this by hosting our Optimist Pram Team Invitational (OPTI) and event that many thought was a crazy idea. Bob Adam at Zim Sailing was the only person who called us back and jumped on the bandwagon. It is an invitational event that only invites club teams, identical new boats, spars, and blades are provided by Zim at no cost, and teams compete in a 3 on 3 team racing. We have had Annapolis Yacht Club, Fishing Bay Yacht Club, American Yacht Club, Royal Canadian Yacht Club, Royal Novia Scocia Sailing Club, Florida Yacht Club, St. Petersburg Yacht Club, Lake Forest Sailing Club, and Chicago Yacht Club. Some of these programs have had National team sailors as well as National Team coaches that have been able to see first-hand what we are growing in Hilton Head. Our second thrust on the USODA stage was hosting of the Team Race Midwinters here in Hilton Head. This brought the nations top sailors to a venue they had never heard of and proved it was one of the nations best. We accomplished 335 races in three days, which helped put SCYC on the map. Change in our local sailing organization is the hardest thing to accomplish, but we try to push for a greater good.

How did you increase the interest of people to join the program?

We were in a situation where there was limited sailing done anywhere in or around Hilton Head. The nostalgia of sailing and the idea of doing something new helped fill the boats. We had four privately owned sailboats when I arrived, and the club owned 15 usable hulls. The first thing we did was purchased two Zim Optimists and six sets of new Intensity Sails. The four members of the existing team began looking outside the membership for sailors. We started after school intro to sailing courses, Friday night sailing, Saturday Racing, and team practice. After 3 years of hard work and continues promotion we now have 170 sailors in our Learn to sail summer program, an Optimist Development Team with 6 sailors, a Optimist RWB Team with 12 sailors, a Laser Radial Team with 6 sailors, a C420 Team with 3 boats, and two emerging high school sailing teams sailing out of SCYC. 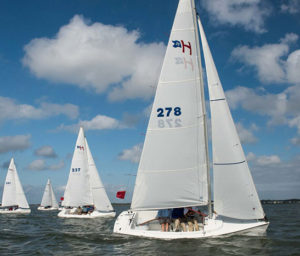 In your eyes, what are the most important things programs need to have to be successful?

In my early days of coaching I thought was to carry on the status quo, to do the things that you personally did to fall in love with the sport, but today with so many activities that kids are involved in it creates a need to expand, change, and reinvent programs and offerings. We now have a fleet of Harbor 20s, along with a J22, J24, J70, and a J100 that are all used by our race team participants and junior sailors. We have also started offering a junior membership allowing the sailor as an individual to become a member of the club and use the sailing facilities and clubhouse. The large number of first generation sailors in our program currently has created the need for family night sailing events, that include some racing, day sails, and cocktail cruises. These events help encourage non-sailing families to participate and learn something about the sport their son or daughter has fallen for.

How is the full-time sailing program going? How often to sailors in this program train?

Our high school sailing teams practice two days a week and have a gym day once a week. Some of these sailors have joined the SCYC C420 Team and sail on Saturday or Sunday afternoons as part of the new South Atlantic Yacht Racing Association (SAYRA) combined team that competed at the C420 Midwinters this year.

At SCYC, sponsorships are awarded to sailors whose families might not have the resources to put them through the program on their own, have these sponsorship’s brought in many students? Has the program retained these students?

The Bob Pancoast Fund is our local need based scholarship fund. This fund puts between 25-35 sailors though our summer Learn to Sail Program. We reach out to local area teachers, first responders, military children as well as area churches. This program is to introduce and give the opportunity to children who may not otherwise be able to attend camps. We have had some multi-year sponsorship’s, but the demand has been ever increasing over the past few years. There has been some retention from year to year as well as older kids moving to the high school teams who also sail out of SCYC.

How many full-time year round staff members are employed? How many are employed in the summer program?

Year round it is only myself. I manage our one design fleet of Harbor 20s, two high school teams, John Paul II, Hilton Head Preparatory School, the Opti Race Team, Laser Radial Team, and Club420 teams. Parents and the SCYC maintenance crew help me keep everything organized and working. In the summer we have a staff of 10 coaches and instructors.

In your opinion, what makes a successful junior racing competitor?

An individual who listens, tries new things, and is willing to accept criticism.

The keelboat program for junior sailors is a major draw for sailors at SCYC, how did this program get started and how do sailors progress through the boats?

The SCYC Jr. Program has as a huge fleet of keel boats we use to keep sailors participating thought out the year. We have four Harbor 20s, a J22, a J24, a J70, and a J100 for sailor to participate in PHRF and fleet racing. The Harbor 20s are a great fleet of equal boats with 12 inside Windmill Harbour. The local racers include former Olympian Chuck Millican, leaders of fortune 500 companies, and afternoon day sailors who compete every Wednesday afternoon like they are campaigning to bring the Cup back to the US. The juniors are able to use the club boats, which are maintained to make them as competitive as the privately owned boats making skill to be the determining factor of winning. Our Harbor 20 fleet races more than 200 races a year. Our Junior teams this past year competed at the J24 North American Championship on Fortitude as an all Junior team. We have had a Junior team competed every year for the last four years at Charleston Race Week on Vortex (J70). This boat was donated to Hilton Head Preparatory school by Vortex racing a semi pro sailing team that operates out of Hampton Yacht Club in Virginia. This boat is every juniors dream as it is a rocket ship with a crew of 5 sailors holding on. It also allows our juniors to see what is beyond the dinghy fleets. We are working on getting the J100 outfitted for offshore racing on the Charleston Offshore Sailing Association (CORA) series and add another facet to the SCYC adult and junior offerings.

What are some notable examples of success sailors and teams have achieved at SCYC?

I have been here for the last four years. We have successfully accomplished Optimist dominance on the local circuit. We have team trial qualified five sailors for team trial and had two make the USODA Belgium Team. We have sailors who made the leap to Loot, Lima, and Prime for more advanced coaching. Matthew Monts is making waves in the multihull fleets including F16, F18, Nacra 15, and the foiling Nacra 17. Alexander Mazzeo is on the Georgetown Varsity sailing team. We are still awaiting that first big national win but are hopeful every time we send sailors to national level events. 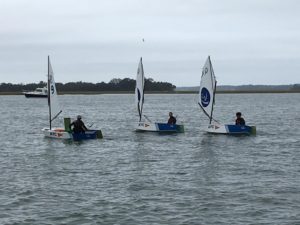 Where would you like to see the program in five years time?

I would like to see a self feeding Race Team program that is driven by parents who see sailing as a sport just as others see football, baseball, soccer, tennis, and golf on Hilton Head Island.

What would be on your wish list for the program?

A second J70 (Get My Boat), or another J22 to add match racing to the list of programs. RHIBs for every one of the race teams would be a great addition to the program as well.