Close Mobile Navigation
Signup to Receive the latest news, events and Sailing jobs Via your inbox
You are here: Home / Classes / E Scow

The E-Scow is the younger sister of the A-Scow. Its rigging is similar, as well, and their hull shapes are almost identical. The boat is competitively sailed in Minnesota and Wisconsin and recently in many more states around the country, including Michigan, New York, New Jersey, South Carolina and Colorado. Only recently has E-Scow class spread to Europe. There are boats at least in Switzerland, France and Finland. Unlike the A-Scow, the E-Scow has a symmetrical spinnaker. The National Class E Scow Association (NCESA) tested an asymmetrical spinnaker option as a potential change to the design scantlings for two years. The asymmetrical spinnaker was voted down by the class in 2006, but it seems that new vote is around the corner with slightly modified rig and more restricted spinnaker shape. 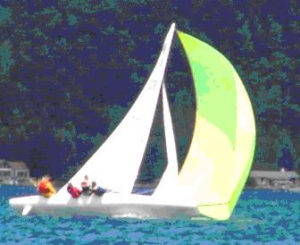