Close Mobile Navigation
Signup to Receive the latest news, events and Sailing jobs Via your inbox
You are here: Home / Classes / Fireball 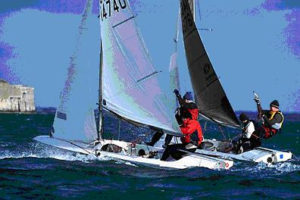 The International Fireball was designed to meet a need –  to the bridge the gap between the small “family” centre boarders and the larger more expensive classes. The designer, Peter Milne, an Englishman, had these motives: cheapness, simplicity to build, unequalled performance potential, price and waterline length, individual appearance.

He achieved his aims in 1962 when the fireball was first sailed in England. The remarkable performance of his prototype was seen especially on the plane and to windward. Without any sponsorship the class grew very rapidly, first in the UK and then on the Continent (France, Switzerland, Sweden and Germany especially), in the USA, South and East Africa, Canada, Asia, Australia, New Zealand and the Pacific Islands.

Within a very short time the need for worldwide administration became apparent and “Fireball International” had to be formed. To this body the newly formed National Associations affiliated. A constitution and detailed class rules were adopted.

The first World Championships were held in England in 1966. In 1968 the spinnaker was internationally adopted. The class was recommended by OYRU for International status and was approved in 1970. The class has been a close contender for Olympic selection. It has established a world wide reputation for its high standards of yachting administration and progressive enthusiasm.