Editor’s Note- Sail1Design is pleased to present coaching technique and style from Laurie Jury. Laurie is a product of the esteemed Royal New Zealand Yacht Squadron’s Youth Training Programme, which he commenced at the age of 15. Match racing became his chosen discipline, pushing through the ranks to become Telecom New Zealand National Match Racing Champion in 2009 and, in 2010 his team won the Mumbai International Match Race. His team’s other sailing accomplishments include first places at the Nations Cup Grand Final, USA Grand Slam, Knickerbocker Cup, Oakcliff Match Race and the Qatar Match Race. Check out Laurie’s article on Command Coaching

Coaching at the Monsoon Cup in Johor Malaysia
By Laurie Jury- The Monsoon Cup is the final event on the World Match Racing Tour; it also has the largest prize purse in sailing 415,000 USD. I had been asked to coach the local Malaysian team at the event; this team had never won a race at the event in the last 10 years, and never really been competitive at the event. Malaysia, as the host country, automatic gets a wild card entry. The rest of the teams are top professional sailors on the World Match Racing Tour.
We had two weeks of training before the regatta and my plan was pretty simple, to focus on getting the basics right, and do them very well.  I know that a team that sails the boat consistency well will always pick up a few wins and often make the quarter finals. It was too big a task asking to teach this team anything else in the short two weeks before the event. 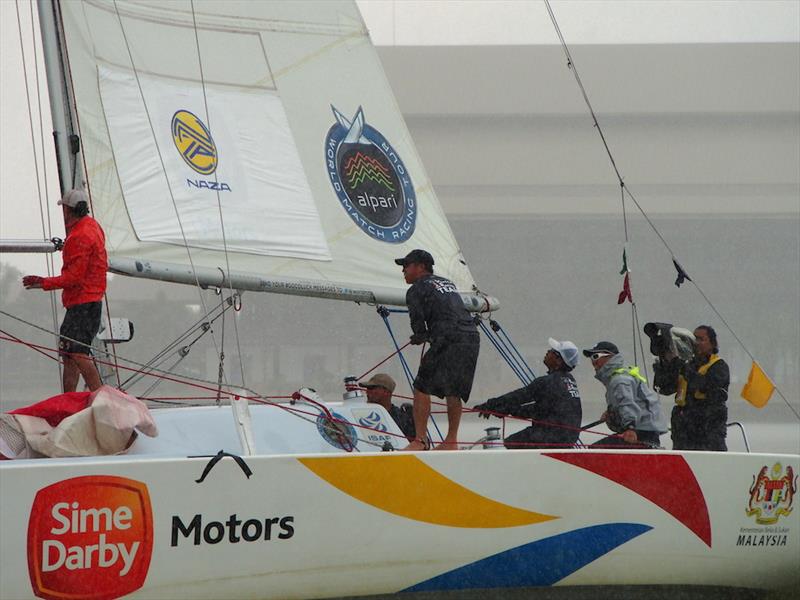 First we had the final regatta of the Malaysian circuit; the team I was coaching had already won the circuit (the prize was a new car) so the result was not super important.
I used this regatta as a ‘process regatta.’ What this meant is I worked hard to shift the focus from winning races to sailing the boat well.  In particular I employed a few key skills, and for this regatta they would be boat handling, and time on distance.
I scored the team at every hoist, drop and entry (time on distance), with 100% being as good as the top guys on the World Tour. This worked really well; the scores per race varied from 30-90%, but were improving constantly though the event.
After each race I would tell the team their score, and I could see they were focused on getting a better score for the next race. It didn’t matter if they won or lost- the funny thing is almost every time they had a good score they won, even if they had a bad start or hit a bad shift.
Why was this important?  When teams are trying to win races they sail differently, they cover hard and use small advantages in boat speed and handling to win. This team won’t have these advantages at the Monsoon Cup; in fact, these will be disadvantages. Also, they back off on the boat handling if in front or long way behind- they hoist later, drop earlier, and are conservative in the entries. To win a race in the monsoon cup they needed to sail their boat at 100% and wait for the other team to make a mistake.

I also told them simply to capitalize on the lifts upwind and knocks downwind and generally ignore the other boat. There were a few reasons for this.

The local regatta went pretty well and the team improved their boat handling and time on distance greatly though the event. They lost two races when they got the shifts wrong upwind.
On the last day they won every race by over 30 seconds. This wasn’t because they were starting well or sailing the shifts better, in fact they were behind in a lot of the races, but they focused on getting a high percentage boat handling score, as I had drummed into them. They always gained on the other boat and always came back to win the race.
The next three days we had a training camp with the world number 2 Ian Williams. For this we focused on prestarts. I broke the prestarts down in to a few key skills, and created a drill for each skill. I already had done this many times coaching match racing teams for the Olympics and Asian games.
I worked hard to make each drill as objective as possible, an example was holding the boat head to wind, this is a critical skill in match racing, we had a simple start/stop drill.  The drill was to hold the boat head to wind until it starts going backwards five times in a row.  A team on the world tour would maybe lose their bow once out of ten times. My team lost the bow 3 out 5 times when we started. We did this drill twice every time we went out, and every time we came in, 4 times a day.  By the end of the training they were losing the bow on average 1 out of 5 times.
We did a similar progression and dril sequence for time on distance, speed builds, turn ups, and lead back times.
After 3 days of prestart training we had three days left before the regatta.  I made two of these days very short 1.5 hour sessions, as the team was doing a lot of sailing. These last few days we focused on getting the small stuff right and perfecting the basics, as it was important to get the teams confidence up and to get them thinking about the right things, i.e. doing their job well.
I thought the regatta went pretty well.  Part of the brief I had been given was that they wanted to win two races at the event; I didn’t really like this as a goal.  For them to win two races another team would have to lose the race, not them win it, and two weeks coaching is not going to make up for years sailing professionally on the world tour. End result, they finished on -0.5 points after losing .5 of a point for a collision, on the score board the worst result ever.
Losing half a point really means nothing, every team on the tour will lose half a point at some stage. It’s just part of being competitive. That is exactly what this team was: they were competitive. They won the start, as in clearly ahead off the start line, in 4 out of 11 Matches; I don’t think they would have ever actually won a start before. They led around the top mark in four races and lost two close races on the last leg to the finish.
What let them down? Well, tactics was a major issue; with an experienced tactician they certainly would have won at least two, maybe a lot more races.  When faced with match racing situations, they lost as soon as they had to engage the other boat.
But if they had of scored that same 90% in the boat handling that they were getting towards the end of the local regatta, they would definitely have won at least 2 and maybe 3 races.  So at the end of the day, they didn’t keep that boat handling score at 90%, and this cost them their two races.
After the regatta I was asked what was needed for the team to make the top 8- I told them it was pretty simple: 100 days competitive racing a year, plus an expensive coach!
Check out Laurie’s article on Command Coaching