Close Mobile Navigation
Signup to Receive the latest news, events and Sailing jobs Via your inbox
You are here: Home / High School & College News Articles / A Life in One Day: What's it's Like to be a College Sailing Coach

Late August has always been a time of the year that I really enjoyed. Summer seems to ease off the throttle a bit. The temperature ceases to have me sweating in the shade. And everyone just tries to relax and enjoy what is left of another summer gone by. Of course it has also always meant “back to school” is right around the corner. Having recently retired from the ranks of college sailing coaching, at 31- I am not going “back to school” for the first time in my life. However, many of my peers are, and I want to wish them well.
The life of a college sailing coach was once described wisely as a “binge-work lifestyle.” It’s easy to look at the flexibility that a college coach has during the summer and be envious, but you may reconsider when you see them on the road for the entire weekend, for the seventh straight weekend of the fall. Yes, like any job it has it’s pros and cons. For those in the game, they know what’s around the corner. But for the rest of you, here’s a sampling of just some of the things that these coaches are going to work through in the next three months.
Roster Challenges
Uhoh… we have more skippers than crews this year. How are we going to keep all these people happy? Seriously, think about it…
Injuries
The truth is, college sailing is a lot different than it was 20 years ago. One of the biggest changes is how good everyone is at boathandling. That said, the manner in which the boathandling is performed these days can be taxing on the body. At some point, every coach will have to deal with a top player not being able to sail due to an injury. How to fill that player’s role (temporarily) without disturbing good vibes within the team is a huge challenge.

Sickness
Eventually, every coach will have to deal with this as well. The challenge of filling that player’s role is the same as the injury problem. However, what if he/she gets more of the team sick? Things can get ugly quick!

They’re College Kids, After All
Did you ever make a mistake in college? Well, chances are good that if you made the same mistake today, the consequences would be far greater. I’m not making any statements about whether that’s right or wrong, but it is reality. Every team will have at least one person deal with a disciplinary issue this season. Every coach just hopes it isn’t the whole team.
Travel Logistics
When you stay in as many hotel rooms and rent as many cars as a college sailing team does during a season, the odds of nothing going wrong become worse and worse. Over time, every college coach leans to just take these things in stride “Oh, they’ve never heard of us at the hotel you guys are trying to check into, even though I’m looking at the reservation in my email right now?…awesome!”
Facilities and Boats
At some point, a toilet is going to explode. Or maybe there will be a rodent infestation. Another great part of owning a large fleet of boats that are all the same vintage is that if one thing fails due to “normal wear and tear”: get ready because every boat is about to have the same problem. You just hope that these things don’t happen right before your big home event.

Team Drama
Probably the worst part of the job, but a certain inevitability. Everything might be going great for weeks, and then something happens within the squad that is totally out of your control, and now three people can’t stand to be within 30 feet of each other, and most likely two of them had been sailing together. Now what?
Individual Challenges
Now this is probably the most rewarding part of the job, but it can be incredibly painful to work through as well. When you have anywhere from 24 to 48 kids on a team, chances are more than good that you’re going to have some individuals who need to work on some non-sailing related things. Meeting expectations, working as a good teammate, becoming a leader, don’t come naturally to everyone. And for some, there are real growing pains through the process and it can be taxing on the coaching staff.
Now all that said, when the dust settles on top of the leaves in late November, nearly every coach will have something truly rewarding to look back on. Perhaps its a championship. Perhaps its a few big victories along the way. But more than likely, it’s some less tangible things. Maybe one of those individuals that has been tough made some real strides this season. Maybe one of your players had to deal with something tragic, and you and your team carried them through it. Whatever the case, there can be sources of tremendous pride at the end of each long, hard season. 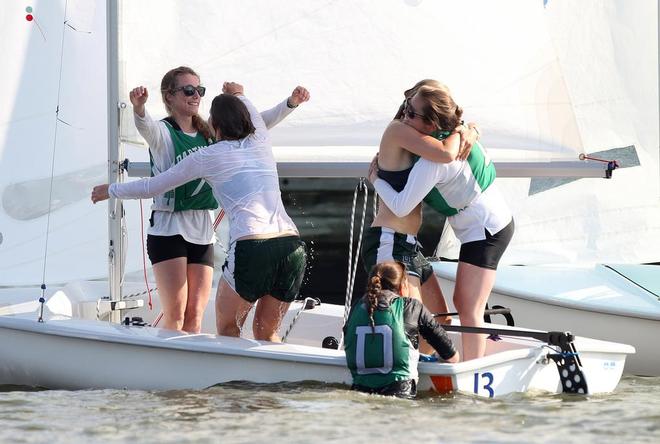 So to all of my former colleagues, I wish you well heading back to campus. I hope your list of challenges is on the shorter side this season, and that they don’t hit at the worst possible time. But mostly, I hope you can sit down with your families at Thanksgiving and be proud of the accomplishments behind you, both on and off the water.
Good luck, old friends.
Sail1Design invites you to share your memorable coaching experience(s) below!