Sail1Design and KO Sailing are elated to announce the first winner of the Annual Sail1Design Youth Sailor of the Year “Lone Wolf” Award. Dedication. Perseverance. Independence. These are just some of the attributes of the go-it-alone sailor, the lone wolf who is able to train, plan, and compete by her or himself, and do it successfully. This award, presented by KO Sailing, goes to the North American youth sailor who best personifies the qualities necessary to be a successful athlete in the single-handed sailing world. Sail1Design picks ONLY from nominated sailors… this is YOUR award!!

Mark McNamara of KO Sailing noted: “KO Sailing congratulates the winner of this year’s award. Our mission is to support sailors in their efforts to rise to the next level. The S1D Youth Sailor of the Year Award is the perfect vehicle to recognize the efforts of these sailors as they achieve their goals. Our Sponsorship of the S1D awards is a small return for the investment these sailors make and we are proud to be a part of it.”
The Sail1Design staff was most impressed with this nomination letter, among all others, especially with Caden’s dedication and commitment to improve.
Here is the nomination letter for Caden:
I would like to nominate Caden Scheiblauer, from Santa Barbara, CA and representing Santa Barbara Yacht Club and the Santa Barbara Youth Sailing Foundation for the “Lone Wolf” Award: Sail1Design Youth Sailor of the Year.
Caden epitomizes the definition of the “Lone Wolf” Award; he is a Laser Radial sailor.  Caden first sailed competitively in Optimists at the age of 10 years old.  By the time he was 12 he was too big for the boat and transitioned into the Laser Radial when many of his contemporaries were still sailing Optimists.  Many of his older sailor friends were sailing 29ers as they were not big enough to sail a Radial.
Caden took to the Laser Radial immediately and loved the feeling of a faster, more powerful boat.  He has been sailing the Radial for 2 years.
Sail1Design uses the words dedication, perseverance, and independence to define the “Lone Wolf” recipient.  At 135 pounds and 12 years old when he began sailing the Laser Radial, Caden knew that he needed to differentiate himself through fitness, diet and exercise to compete in breezy conditions with the older, bigger kids already sailing Lasers.  He did not let the fact that many of the kids he had grown up sailing around were no longer in his fleet; he was a lone wolf.
Fast forward to 2015 and I believe that Caden’s enthusiasm and dedication are paramount to his current success in the Laser Radial.  Caden is a lean 147 pounds and 5 feet 10 inches tall. He started an intense workout routine going to gym 4 times a week in late 2014 and has continued in since.  He routinely gets up before school to work out or will go after he completes his homework and will not skip a workout.  In addition he does not eat red meat, and adheres to a strict no sugar, high protein and complex carbohydrate diet.  You won’t find a 14 year old as dedicated to the sport and his fitness as Caden.
In the summer of 2015 he competed in numerous high profile Laser events and some of his accomplishments are below;
13th Cressy Trophy – 18 competitors(only freshman in the competition)
2nd PCISA Cressy Eliminations – 31 competitors(only freshman to qualify)
4th – Laser District 25 Champs/Frost #1 – 40 competitors
22nd Laser North Americans -115 competitors
14th Laser US Nationals – 127 competitors
2nd Junior Olympics – 25 competitors
3rd Laser Pacific Coast Champs(PCC’s) – 34 competitors
4th ABYC Olympic Classes Regatta – 32 competitors
3rd ABYC Memorial Day Regatta – 16 competitors
5th Laser Gulf Coast Champs – 33 competitors
14th Laser Midwinter’s West – 51 competitors
30th Laser Midwinter’s East – 118 competitors
Most recently Caden has been invited to participate in the US Sailing Olympic Development Program Camps sailing with coaches Leandro Spina, Anna Tunnicliffe, Rulo Borojovich.  Caden understands the importance of his fitness in the Laser Radial class and has increased his commitment to this aspect by signing on with Anna Tunnicliffe and works out 4 times per week with CrossFit style sailing workouts.
To culminate a fabulous 2015 Caden was invited to travel to the Australian Laser National Championships outside of Sydney, Australia on Dec. 26th at Belmont 16’s Sailing Club.  He will be working with US Sailings Olympic coach Mark Littlejohn and relishes the opportunity to represent the USA at this event. 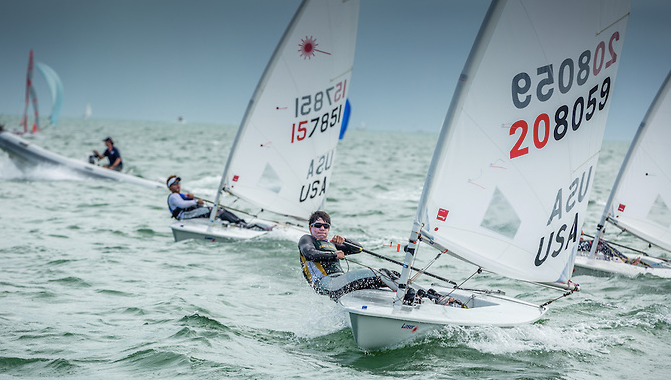 I do not think you will find a more dedicated 14 year old to his sport.  Caden wishes to represent the USA in the Laser in the 2024 Olympics.  You can follow him on his website he singlehandedly composed and launched at www.cadenscheiblauersailing.com.  For all the dedication, perserverance and independence I have described in his diet, workouts, training and traveling to regattas, I believe Caden is a worthy recipient of the Lone Wolf award.  In addition he maintains a 4.0+ grade point average at Santa Barbara High School.
Learn more about our Youth Sailor of the Year Award.