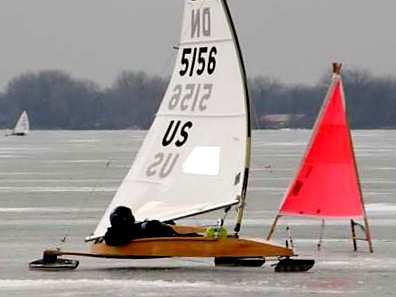 Your sailing season doesn’t have to end just because it’s getting cold outside.  In fact, for many racers, when December comes around the season is just getting started.  We’ve all seen the AC 72s sail at over 40 knots.  Now imagine the extreme exhilaration of sailing faster than that, laying on your back in a luge-style cockpit, tiller on your chest, mainsheet cranked in hard, wind screaming past your telltales, ice skimming by in a blur underneath you, and 30 other boats converging on the same leeward mark.  There’s no other rush quite like it.  Actually, for many iceboaters, the regular (or “soft water”) sailing season is just a temporary fix to get through the summer until that first sheet of immaculately smooth black ice freezes over, providing the perfect venue to feed the adrenaline addiction once again.  Look no further than the DN to be the gateway to introduce you to the addiction of sailing on ice.
Remember from high school physics class, when they mentioned an object in motion in a frictionless environment? This is what they were talking about.  With iceboating you pretty much remove the drag factor completely from the equation.  In an iceboat, the faster you sail, the greater your apparent wind, and the more you accelerate with nothing holding you back.  Basically, the faster you go, the faster you go.  Ease out for the puff? No. Trim harder, watch the mast bend and feel the boat accelerate. Let the sail out downwind? No.  Hopefully you can withstand the G-force of rounding the windward mark, steer down, keep the main trimmed in, and get all three runner blades back down on the ice, because in an iceboat, you’re sailing so fast that the apparent wind is always in front of you.  What about the start? Forget your run-of-the-mill 5-minute sequence.  Try lining up 50 boats on a literal line, half on port, half on starboard, with each skipper outside of the cockpit anxiously waiting to go into an all-out sprint at the drop of a checkered flag.  Be sure to pick up a good pair of track spikes and a clean change of pants because DN racing is out-of-this-world awesome.
The Boat
The DN name originates from Detroit News, where the DN was first designed and built in the winter of 1936-1937.  It was built in a hobby shop at Detroit News to fulfill the demand for a simple and affordable ice yacht. Since then, the boat has evolved considerably, but has not strayed away from the original parameters.  The wooden hull is 12 ft in length and sits atop of an 8 ft wide beam known as the runner plank.  Unlike a stern-steerer, the DN has a tricycle configuration, meaning that it has two runners (the steel skates that the boat rides on) aft on the outboard ends of the plank, and one steering runner forward at the very bow.  Many newer boats feature upgrades such as lengthened insert runners and an extremely flexible carbon-fiber mast.  The mast is 16 ft tall, allowing for a mainsail area of 60 sq ft, which is plenty when you’re sailing at these insane speeds. 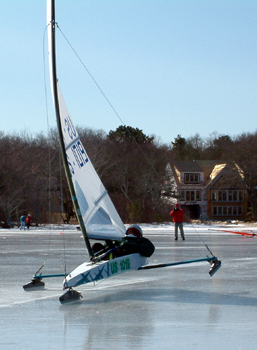 All in all, the boat is very simple to set up and rig. It only requires one person to bolt the hull to the plank and to step the mast. Therefore, the DN can truly be considered the “Laser” of ice sailing.  The portability of the boat has contributed to its worldwide popularity as well. With a hull weighing only 46 lbs, the DN can be transported easily via car-top or trailer; some people even just put them in the back of a pickup truck.  Overall, the DN’s popularity, portability and simplicity make it a very practical boat to own/race if you’re looking to break the 50 kt benchmark. Actually, you can go a lot faster than that! “I’ve been clocked at 143 km/h, in Finland in 1998, which is about 89 mph,” says DN World Champion Ron Sherry. The DN includes all of this for a reasonable price of around $2500 for a competitive used setup.  “It’s about the cheapest form of winter entertainment you can get. You can buy an old boat for around $300 and rip around on a lake and have a ride you’ll never forget.”
The Class
With over 5000 registered sail numbers, the DN is the world’s most popular iceboat class.  The class has a strong following in North America, Europe and even Russia.  The camaraderie within the class is second-to-none as well.  “I always say, iceboating is 50% social and 50% racing,” says Sherry, “because there are a lot of conditions that don’t allow you to sail, so it’s important to make friends and have a good time.”  Humble champions are not only willing to help others rig, but will take the time to help new sailors fine-tune their setups.  Some ice sailors also take part in group boat building workshops. It’s truly a fantastic community to be a part of.
Check out the DN official class website at ice.idniyra.org.  A complete tuning guide and helpful racing tips can be found at http://iceboatracing.com/. For the young aspiring ice sailors, check out the DN’s little sister, the Ice Opti http://www.iceboat.org/optis/about.html, which is a scaled-down DN rigged with an Optimist mast and sail.
Here are some other great links to introduce you to the world of iceboating:
Since iceboat racing can be a dangerous sport, it’s important to take safety precautions. Here is an informative write-up on safety from the Four Lakes Ice Yacht Club: http://iceboat.org/iceboatsafety.html
There are some important discrepancies between the iceboat racing rules and the ordinary racing rules of sailing, so be sure to brush up on the rules:
http://www.iceboat.org/bylaws.html 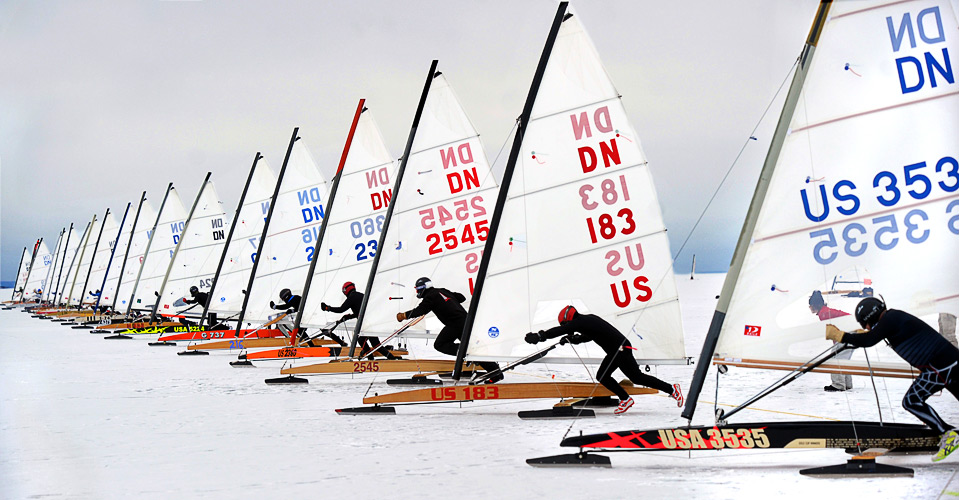