“The class of champions”

In the past one hundred years, the Star has established itself at the forefront of the international sailing community. The first one-design class and core Olympic racing yacht since 1932, the Star attracts sailors of varying ages and skill levels from all over the world. With nearly 2,000 boats competing annually and over 170 active fleets world-wide, the development of the class is not likely to slow down in the foreseeable future.

Designed in 1911 by naval architect Francis Sweisguth, the Star was born to replace the 17-foot “Bug,” which was one of the most popular keelboats at the time. By May 1911, the first Star class regatta was held on Long Island Sound and featured five of Sweisguth’s new boats. By 1922, the Stars already numbered in the hundreds, thus leading to the foundation of the International Star Class Yacht Racing Association (ISCYRA). 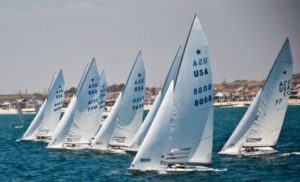 A beautiful and elegant yacht to behold, the Star features a simple rig and tall, flexible spar. The massive sail area combined with a sleek, narrow hull allows the boat to accelerate rapidly in nearly all breeze conditions. Redesigned in 1930, the yacht now features an aerodynamically efficient sail plan with a high-aspect ratio and virtually unlimited tuning ability.

Just under twenty-three feet in length, the hull is long and narrow and features an integrated bulb keel positioned just aft of the mast. In adherence to strict class rules, the Star weighs 1,479 pounds and is typically constructed of fiberglass. Older wooden hulls can still be found from time to time, but rarely in competition. The hull has gentle, sweeping chines leading toward the water line that not only provide a speed advantage, but attribute to the yacht’s aesthetically pleasing appearance.

During the yacht’s one hundred year history, new features have been incorporated into the design in an effort to maintain the class’ position as the pinnacle of the international racing community. The class association began asserting a control over new refinements, not to stifle progress, but to maintain a level of competition based more on the skill of the sailor than the technological advancements of the yacht. Some of the features include:

One of the interesting features of the Star is the hiking vest. The vest is worn by the crew and allows him or her to adopt a unique hiking position by “drooping” their body over the side of the hull. In addition to the vest, the Star also features a circular vang system. Designed for the star, but eventually adopted other classes, the circular vang system provides a safe means to deal with the enormous loads of the yacht’s large sail plan. 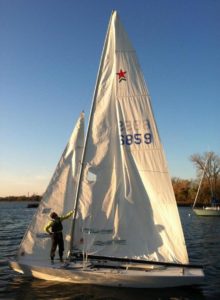 Numerous champions of the sailing world spent time sailing the Star and hold prestigious international titles. A Star Class World Championship is often considered on the most coveting trophies in all of sailing. Despite the high level of competition at top tier events, the Star also offers opportunities to local and amateur sailors. The depth of skill level and opportunity is unrivaled by any other racing class. Sailors looking to compete at the local level can often gain experience with the boat and progress up through the levels of competition, not to mention enjoy the thrill of sailing such an incredible boat.

Get involved with the Star Class! If you want to begin racing there are plenty of Stars out there looking for a good home. Thanks to the regulation in design features, many older Stars perform just as well as their newer counterparts and run at affordable prices. If you are a former college sailor or young professional looking to stay active at the highest level of competition or looking for a fast boat to sail at the local level perhaps a Star should be your next boat…

Sadly, in 2011, it was decided that the keelboats would be removed as an Olympic class following the 2012 Olympic Games in London. Recently rumors began to circulate of comeback for the 2016 Games; however these were quashed almost immediately by the ISCYRA. Despite being struck from the Olympic books the Star class has showed no signs of losing momentum. Huge turnouts for Barcardi Race Week and the 2012 Star Winter Series appear to have breathed new life into the yacht. With hundreds of local regattas scheduled this year and dozens at the internationals and championship level, the Star class remains strong