Close
Signup to Receive the latest news, events and Sailing jobs Via your inbox
You are here: Home / Boat Speed/Tuning/Sailtrim Articles / Outside Asymmetric Jibes Revisited

By Andrew Kerr
While racing in the Round Block Island Race with a J122 team recently, we saw the value of an outside Jibe when it was blowing 25 to 33 knots plus with big waves. The wind built steadily and a required a jibe at the corner of the Island in a building following sea. We set up for an outside jibe ,the spinnaker sheets were long enough to go outside the sail and the lazy spinnaker sheet sat on the “Jibulator” soft baton that was sown into the sail just above the tack .

To change to the outside Jibe simply meant putting the tack line underneath the sheet when rigging the spinnaker, enabling the lazy sheet to be outside the sail.
With most of the crew in the back of the boat, the trimmers in position  and the middle person ready on the vang to possibly release it once the jibe was completed in case the boat heeled excessively to leeward for one reason or another, we were ready.
We looked to jibe on the top of a wave to take the pressure off the sails, the mainsail was brought in 3/ 4 of the way to reduce the amount of distance the boat had to be steered (with the traveler centered and cleated on both sides). With the crew in position with everyone as aft as possible, we started the jibe as the stern lifted with buoyancy of the wave, as the boat was nearing a run the spinnaker sheet was released and the spinnaker flagged in front of the boat, the mainsail was jibed and then smoked out and having taken the slack out of the weather spinnaker  sheet prior to the Jibe , the trimmer then sheeted in the sail with all the crew in position, the spinnaker filled and off we went with the boat close to 19 knots of boat speed.
So what is the value of the outside Jibe in heavy air?

So what are the tradeoffs of outside Jibes? 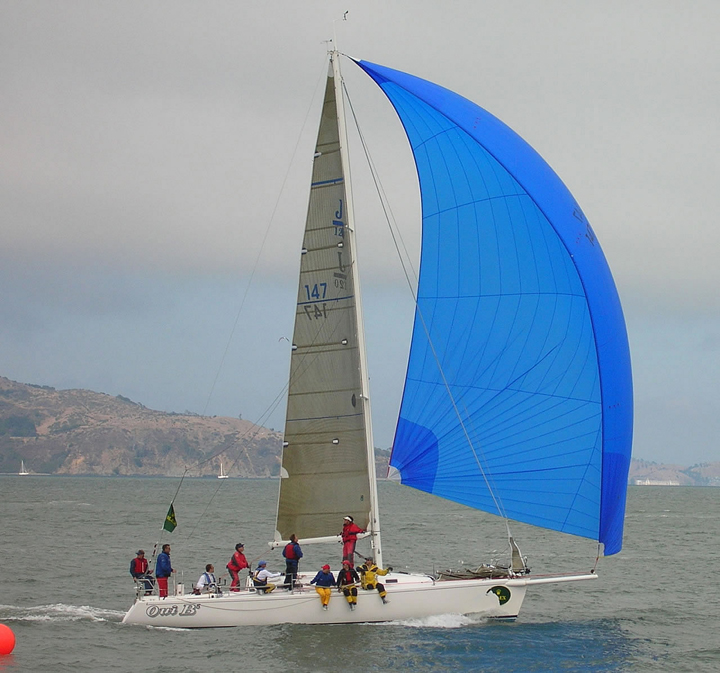 In summary with all these factors taken into account the bottom line is it makes for a safer Jibe in heavy air and particularly off shore with big waves where it is important to maintain balance and control in the waves once the Jibe is completed.
I would encourage teams who do not currently do outside Jibe’s to look at this technique and see if they can incorporate it into their boat handling repertoire for their specific design of boat, particularly if sailing offshore.