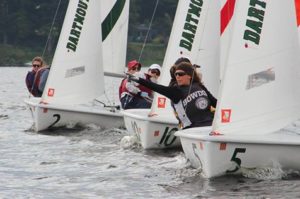 UPDATE: Severn Sailing Association to hold “Team Race Winter League“, and in so doing, to launch the Umpire School! Umpires will get a chance to referee team race games and hone their skills!!!
News Flash: Team racing has evolved far beyond our administrative resources to properly manage and officiate it.
For Immediate Release: Annapolis, MD– Thirty years ago, team racing was competitive, fun, somewhat new, but also vastly different from the game we watch today. I distinctly remember, as a high school sailor, and even in college, sailing port-triangles, four on four, with first place counting a 3/4 of a point. Imagine the combos! In some cases, taking cues from British team racing, great American team racing innovators, Gary Bodie, Fran Charles, Ken Legler, Scott Ikle, Adam Werblow, to name just a very few, have created a wonderful new monster: the digital-N, among other courses, and 3 on 3. What has also developed exponentially is player preparation, skill level, and experience in the game.

Today, team racing is on a level that few would have imagined back in the day. Sail1Design ranks the top collegiate team race teams, and our panel of college coaches is continually impressed with the maturation of the sport. In fact, high school team race teams, Point Loma, Newport Harbor, Tabor, St. Georges, etc., today are easily as competitive as college teams were ten years ago.

It’s (almost) all good! However, if there’s one thing that might be lagging behind, it is application of the rules while the game is being played. Team racing long ago outgrew Corinthian self-monitoring. Fleet race judging, and team race umpiring emerged in sailing, developing alongside a more competitive sport, where athletes continue to push themselves, and the boundaries of the sport, further. Professionalization leads to higher performance, which is great, but also has other consequences, some of which need to be addressed.

Unlike fleet racing, where one still may compete at very high levels with the self-policing philosophy of, say, golf, team racing is more a game than a race, and therefore, like most other games, needs referees. We call them umpires.
Imagine going to a football or hockey game without referees. Unimaginable. As a dad of a 10 year old, I know that even youth lacrosse would be like Lord of the Flies out there without the men or women in stripes to keep things in line. Team racing has evolved to the point where our sport needs to join, or create, an organization like the National Association of Sports Officials. While collegiate umpiring is somewhat well-appointed, high school team race umpiring needs more support. We need better referees in a sport that demands it. All too often, competing high school coaches serve as umpires in high school team race regattas. This is awkward at best, and potentially inappropriate. 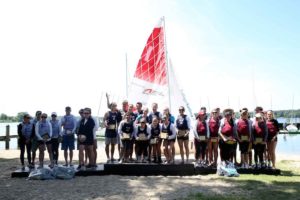 Sail1Design is developing a Team Race Umpire School, here in Annapolis, MD. We are especially interested in developing umpires, and a stipend for them, for refereeing high school sailing regattas. This will include classroom discussion, and feature on-the-water live practice umpiring. We want to create more umpires, and a fund that will help pay them for their efforts. S1D also seeks corporate sponsors to help in the effort. Join us, and let’s make a great game better, at the most important levels…. the grass roots. Youth and high school, and even college, teams need better referees so our game can continue to evolve.
Now with the Team Race Winter League, we have a series and venue for our laboratory!
For more information, contact us!