The 2016 winner of the S1D Coach of the Year, presented by Henri-Lloyd, is St. Mary’s Director of Sailing Bill Ward. This award is determined by you, our readers. We only choose from submitted nominations!! We had MANY outstanding candidates, and this year was, by far, the most difficult year to choose.
Bill Ward joined the St. Mary’s sailing coaching staff in the fall of 2006 as the assistant coach. However, his official title has changed to the Director of Sailing. In nearly 15 years of collegiate coaching, Ward’s teams have won five national championships. He also had the honor of coaching Team USA at the 2008 Beijing Olympic Games. In 2008, Ward was also named the National Coach of the Year by the U.S. Olympic Sailing Committee. He was also on the coaching staff of the U.S. Sailing Team for the 2007 Pan Am Games in Rio de Janeiro, Brazil. Ward served as the team leader/head coach for the U.S. Inter Collegiate Sailing Association Team competing in the BUSA Tour in 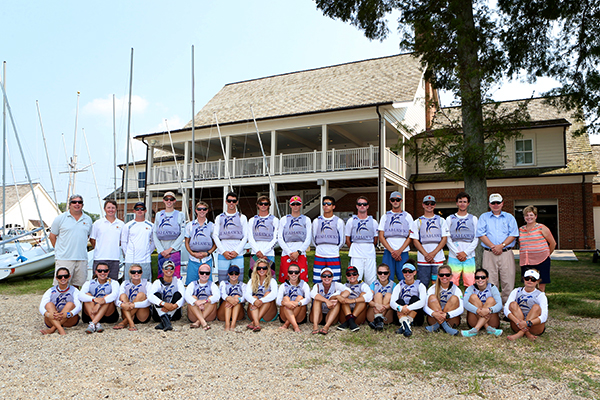 England and Ireland in 2005. He graduated from Georgetown University in Washington, D.C. in 1996, where he was a two-time All-America honorable mention (1994 and 1995) and team captain. Ward led Georgetown to the program’s first-ever appearances at the ICSA Dinghy and Sloop National Championships. Bill’s nomination included the following letter and video from a player on the St. Mary’s squad:
I would like to follow up with my nomination for Bill Ward as coach of the year.  Having been involved in college sailing for five years with two top sailing programs, I have experienced all levels of coaching. I have experienced ineffective coaching techniques firsthand and have witnessed many different strategies. Throughout all of this, Bill Ward has stood  out as one of the best coaches in college sailing. He has been able to stay motivated year after year leading to reach the podium of team race nationals all most every year.  He has been able to develop a technical training program and with his detailed guidance after every race or drill, his sailors are able to become some of the best sailors in the country year after year. Bill always knows where things went wrong and seems to always say the right thing. He is aware of when it is the time for a lesson and when it is time to keep things light and move forward. I know that if I was starting a sailing team today, I would hand pick Bill Ward to be the coach.
This is a video about the St. Mary’s Sailing Team’s 2016 Season and is dedicated to their coach Bill Ward for his dedication to create a title winning team. Featured in the video are skippers: Markus Edegran, Alex Curtiss, Mackenzie Cooper, and Carolyn Smith. Crews: Shelby Jacobs, Pat Tara, Greer Wattson, and Julia Monro.

Sail1Design annually seeks your nominations for the Henri-Lloyd S1D Coach of the Year, for a coach that embodies the qualities (and more) listed in the article below. Sailors, this is your award! The Sail1Design staff chooses the winner only from our readers nominations! This is a great opportunity to recognize a coach that you feel makes a difference!
Henri-Lloyd generously supplies the winning coach with a new HL Jacket, and a $500 gift card for Henri-Lloyd Online, to shop and get some of the worlds best sailing technical gear.

All good coaches, regardless of their chosen sport, share some important fundamental qualities that transcend technical knowledge, or specific x’s & o’s. In other words, whether it’s a basketball, tennis, hockey, football, chess, or sailing coach, there are certain key characteristics to good coaching, and none of these really requires technical knowledge of the sport they are in.
Here are some of those characteristics: logistics, organization, energy, leadership, passion, creativity, patience, dedication, motivational skill, humility.

I would bet that you could take a good coach, put him or her in a new sport, and that coach would find some success. Think about the best coach you ever had, and visualize that person in another sport, and you might see just how that person could adapt and still be a difference-maker.
However, we all know that great coaches not only possess these core qualities, but indeed they are also masters of the subtleties, rules, and technical chess moves of the sport they are involved in. Very often, great coaches are former players themselves, and often they are good, but not necessarily great players. In any event, it seems virtually certain that actually having been in the arena at some level, having been a true game player, is a necessary ingredient for a great coach.

So then, what an important advantage sailing coaches have, since the sport allows lifelong top-level competitive opportunities. While it would be impossible for a middle-aged football coach to live, first-hand, what his players go through on the gridiron, middle-aged sailors and coaches can stay current, and can compete right alongside the world’s best sailors, and even win world championships in sailing. Opportunities exist in team racing, match racing, and all types of one-design classes offer regattas, year-round. In this manner, sailing coaches have the ability to get inside the sport, at the highest levels, learn more, and feel the same things that their players go through out on the race course. The empathy gained here is a very powerful tool that great coaches employ when coaching.
Getting into the rhythm of a sailboat race, realizing first-hand the excitement and frustrations of the sport, preparing mentally for each race, “knowing when to tack”, these are all things that coaches must be able to talk to their players about, and talking to them about these things is so much more clear and present when done by someone who is actually good at them, and has done them recently at a high level.
For example, it was always easy for me to say to a team, “make sure when you are in FJ’s at the starting line to allow yourself more leeward room to accelerate since the foils are small and the boats need to go bow down first before they start lifting.” It was really easy to say. It was quite another thing to actually do it, and to go out on the starting line, in FJ’s, and practice what I preached. That was a LOT harder, and I drew a great deal of empathy with my players from that situation and recognized better ways to talk about it and to talk them through it, having been there myself. This is especially true in team racing, where coaches can see plays easily on the coach boat or on the drawing board, but it’s one thing to talk about a mark trap at Mark 1; it’s another thing altogether to go out and be able to execute it. Without being, or having been, in the arena, sailing advice and technical coaching can be somewhat hollow compared to other sailing coaches who know it first-hand and live what they coach.
So, when you look to your coaches for advice or to get to that next level, or if you are a interested in sailing in a college program, take a moment and check out the coaches resumes, just as they will most assuredly be checking yours. The list that makes coaches good coaches should be there for sure, but see if the coaches list how, or if, they stay current in their profession and have the passion to go out on the racecourse themselves. Great coaches usually always have a story, and very recent one, of a lesson learned at a regatta they sailed in themselves. They love to sail and get better, if only to become a better sailor and coach.
While there is a short list of coaches who choose to (and can) do it all, many top collegiate programs now share these coaching qualities by hiring an assistant or co-head coach, who is very often a recent college sailing alumnus and is active in dinghy racing and brings that empathy, right away, to the team. The head coach then ties everything together with experience, maturity, management, and knowledge of the game.

If you’ve ever noticed, baseball coaches actually suit up for games even though they certainly won’t be playing. This historically comes from the old “player-coach” model, and perhaps, this connects them with the game and the player more intimately. Sailing offers the unique ability for all ages to compete at the highest levels of the sport, and great sailing coaches take advantage of this, “suiting up” themselves and making themselves better at coaching by sailing competitively.