After an action-packed and exciting weekend of sailing, the latest S1D ICSA Team Race Rankings are now live, complete with coach comments!! To see the updated ICSA Team Race Rankings and coach analysis, CLICK HERE!
The Graham Hall is the largest team race on the College Sailing spring schedule. Showcasing 16 teams, this year’s edition ended with 122 races sailed. The accomplished Race Committee at Navy completed a full 16 team round robin and tie-break sail offs between the second and third finishing teams as well as between the tenth and eleventh finishing teams. Ian Burman, Head Coach at the Naval Academy had the following to say of the now iconic event:

“The regatta is named for a former Navy coach who passed away from cancer. He was one of the original advocates for team racing in ICSA. Gavin O’ Hare started the regatta maybe 15 years ago. For the first few years it was a combined event with the John Jackson at georgetown.  8 teams at each venue the first day and then the top 4 from each venue would sail at Georgetown on Sunday while the bottom group was at navy. 9 or 10 years ago, we switched it to a 16 team event at navy only. For the first few years, we did it on 2 courses, but we switched it to 1 course around the same time that nationals expanded to 16 teams.”

Yale won the event finishing with a 14-1 record, only dropping one race throughout the 122 race regatta. Yale sailed their standard squad of Nic Baird ‘19, Nick Hernandez ‘19 and Shawn Harvey ‘21 at the helm of each of the three boats alongside Graceann Nicolosi ‘20, Sonia Lingos-Utley ‘21, Claudia Loiacono ‘21, Catherine Webb ‘22 and Sam Tobin ‘22 in the front of the boat, rotating depending on the breeze.

“We had a solid week of practice last week on our spring trip and although it’s still early season and we’ve only had 7 or 8 days of sailing, the rust is starting to shake off,” said Coach Zack Leonard when asked about his team’s success last weekend “We are improving our communication as a group and becoming a more cohesive group.”

Sailors were welcomed to Navy by a fresh breeze from the Northwest which led to sporty team racing. “The conditions were fantastic for team racing on Saturday with consistently strong breeze and a few gusts hitting the mid 20’s,” said Georgetown Coach Janel Zarkowsky. “Unfortunately Sunday’s light north westerly started fighting a weak sea breeze which slowed down racing considerably. The Graham Hall is a monster event hosting so many teams. It’s a perfect opportunity to prepare a team for a marathon day of sailing, in big breeze, with 15 races to complete a round robin, and the sun setting at 7PM. It did remind me of nationals in that it was completely overwhelming. Each team brought a quiver of players to tackle the weekend’s forecast and the race committee did a great job having minimal lags between rotations.”

Whether it was the conditions or skill that favored Yale, the Bulldogs started the event by winning their first 10 races sailed before dropping their first and only race in race 75 of the regatta, at the hands of St. Mary’s College. Yale finished the regatta by sailing a perfect Sunday, 3-0 including a 1-2-3 finish against an excellent Georgetown team in the school’s first showdown of the young spring team race season. 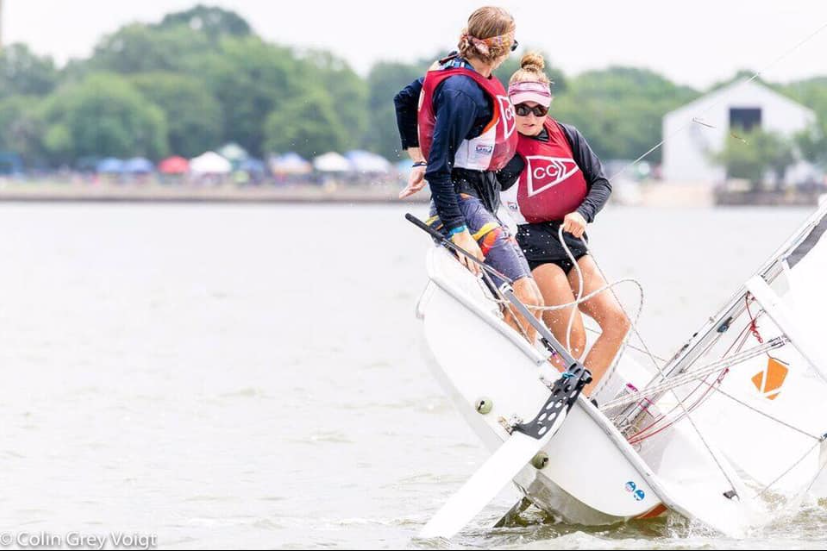 Charleston finished second with a 12-3 record, winning a tie-breaking sailoff with Georgetown. Again, Charleston leaned on Augie Dale ‘19 and Katherine Lounsbury ‘20 as they adjust to a drastically different team than last year’s championship winning one. Compared to Yale and Georgetown, this Charleston is unseasoned but also that means we don’t know how good they can be. According to techscore, Steven Leuck, a junior,  has only sailed 8 regattas in his college sailing career. Alie Toppa ‘20, on the other hand, has sailed 36 events. But this is only her third team race. Despite inexperience outside Dale and Lounsbury’s boat, clearly the Cougars are doing something right.

“We sail the boats better than the opponent and then team race as needed,” said Charleston Head Coach Ward Cromwell. “I know this team can beat any team in the country right now.  Once we get a bit more starting practice in and tidy up some Mark 3/4 situations this team will be deadly for sure! Annabel sailed with every skipper on my team this weekend, something I have never seen before and speaks volumes to her ability to improve others.  Allie is as fast as anyone in the game right now.  She loves the game & plays with a ton of inspiration and and excellent attitude every time we hit the water.”

Georgetown finished third overall (12-3) after the tiebreaker sailed against Charleston. “We sailed very well this weekend with only 3 losses in the round robin,” stated Coach Zarkowsky. “The races we won were achieved by a clean execution of all three players at the start. We have confidence in our speed and boat handling, so starting was the key to our success.”

“One issue in the races we lost were the persistent shifts and velocity changes on both days,” continued Zarkowsky. “At the Naval Academy, when sailing in the river adjacent to the Robert Crown Sailing Center, any westerly direction gets blocked by the campus. This creates massive lulls in pressure on certain parts of the course and winding persistent shifts that make balancing pairs or completing passbacks difficult.”

“There is an unspoken coaches competition to have the most sailors compete at one event. We clearly won this weekend! Knowing that 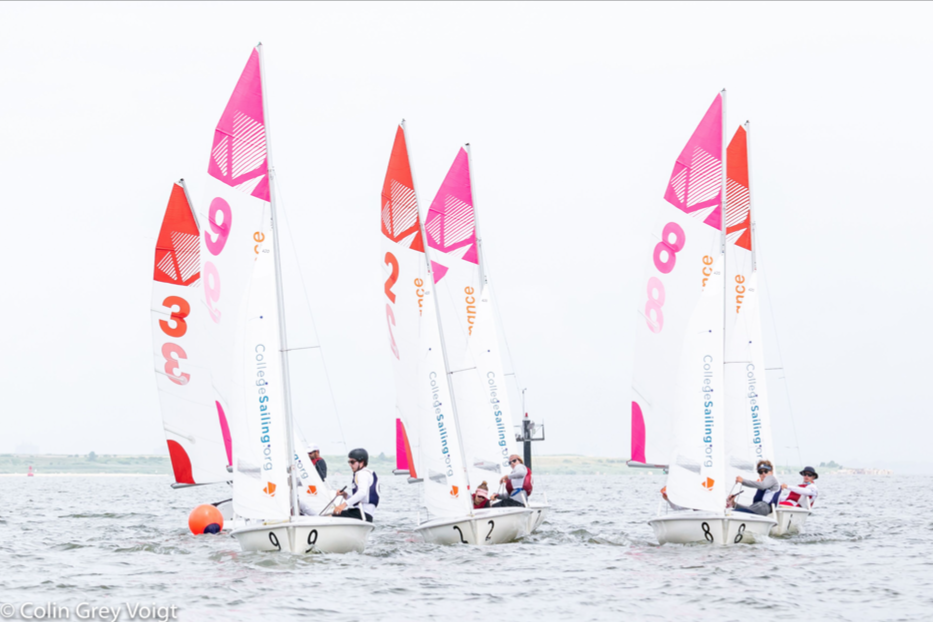 Sunday’s forecast was predicting winds from 10 to 25mph, it was a no brainer to bring the entire squad. Our goal was to try out different combinations in both FJ’s and 420’s in this range of conditions. I can say with confidence now that we feel comfortable in any breeze strength and in any boat after sailing this weekend.”

Navy finished fourth with a 11-4 record while Hobart and William Smith finished 5th with a 9-6 record.

Yale won the St. Mary’s Women’s Interconference to add to their team’s success over the weekend. Finishing with 150 total points after 14 races sailed in each division, the Bulldogs finished 22 points ahead of Harvard. Finishing in the top-4 in both divisions the victory was clearly a team effort for Yale. However, the A-Division effort by Louisa Nordstrom ‘20, Kathryn Clulo ‘21 and Catherine Mollerus ‘21 was especially impressive due to the way it started- with six of the first 8 races sailed, in big breeze, scored in the top-3. The two anomalies for Nordstrom, Clulo and Mollerus, a 4th and a 6th. The three Yale sailors won the division by 3 points over Boston College’s Isabella Loosbrock ‘19 and Emma Perry ‘19.

The B-Division performance by Yale was nothing to scoff at. Finishing 10 points out of the division win, Christine Klingler ‘20, Catherine Mollerus ‘21 and Kira Woods ‘19 only had 3 races outside the top-8 the entire 14 race event.

“We have great versatile crews that can sail in a big range,” said Yale Coach Bill Healy. “We moved three crews around the two divisions and it worked out very well. We start by talking about speed skills and technique. Making adjustments during an event is important. On a windy day I talk more about technique than about tactics.  Bad technique and poor speed will never be overcome by talking tactics. Once the speed is there, tactics make sense.”

“We trained for the past four days prior to this event,” continued Coach Healy “Comfort with each other is key and we are going to work on comfort all Spring. And never giving up- There were opportunities to gain and lose especially on Sunday at St. Mary’s. They gained more in those changing situation then they lost. There were times when things looked bleak and they had the skill to take advantage of situations when presented. Not to say that they weren’t ever on the short end of the stick!  And Chrissy, Cate and Kira should have won B as well but were tossed in an unfortunate protest. So everyone sailed really well while still taking stuff home to work on.

“The team is committed to succeed. They’ve done a good job in the gym, at lectures and we just came off a great week training at USF.  Every team is going to get better and we need to do the same.”

Harvard finished 2nd with 172 points while Hobart and William Smith finished 3rd with 180 points. Katherine Cox ‘20, Kate Homet ‘19 and Cailin Gensler ‘21 won B-Division narrowly, putting together a string of top-3’s to start the event, only finishing outside the top-3 in one of the first 8 races sailed. 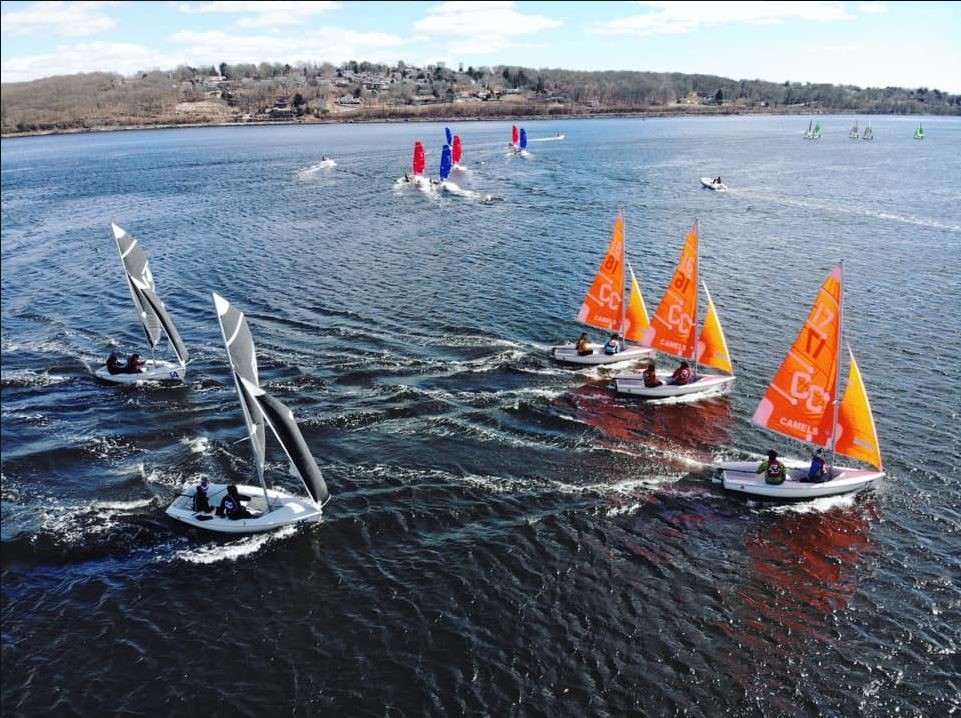 Boston College won the Southern New England Team Race with a 15-2 record at Connecticut College, the host site of the New England Championship.  The Eagles started well, finishing the first round robin with a 7-2 record. However, Bowdoin too started the first round at 7-2 and MIT did one better, putting up 8 wins in their first 9 races.  The Eagles turned it on in the second round robin, going undefeated and winning the regatta.

“The Eagles made a couple of fleet racing mistakes in the shifty conditions on Saturday that left the door open for a few of teams to capitalize on,” said Boston College Coach Will Bailey. “On Sunday the team did a better job keeping their heads out of the boat and finding pressure to extend away from the competition.”

“We saw pretty some pretty classic conditions for Conn,” continued Coach Bailey. “A shifty westerly coming down over the hill with puffs touching down near the windward marks. Teams that were able to win the ends and extend to the edges found themselves in pretty good shape. The recipe for success was to focus on fleet racing up the first beats and try to avoid the umpires.”

Bowdoin finished second with a 14-4 record. MIT finished 3rd, tied with Bowdoin, but losing the tie-breaker on points.