Close
Signup to Receive the latest news, events and Sailing jobs Via your inbox
You are here: Home / Classes / Shark 24 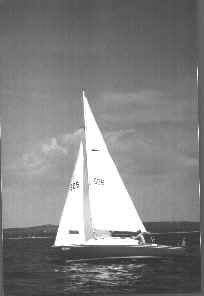 THE SHARK – from “A Touch of Class” by Judy Kingsley (#606 Windrift)
published in Canadian Yachting, June 1994:

When George Hinterholler designed the Shark in 1959, he was looking for a boat that would “go like hell when the wind blew.”  Growing up sailing in Austria’s Salzkammergut region, Hinterholler was used to light displacement finkeelers; fast, responsive and exciting.

The few sailboats he found on Lake Ontario when he immigrated to Canada in 1952 had heavy displacement hulls.  They were ponderous and had a bad habit of hoppy-horsing in the rough Lake Ontario chop.

The young boat builder/designer was bored by their performance. Announcing that he could build a boat that would sail circles around the rest, he retired to the shed behind his Niagara-on-the-Lake home and built Teeter Totter, a hard-chined 22-foot sloop made of plywood.  It was the forunner of the Shark.  And when the wind blew, it did go like hell. Its designer loved it and so did his friends.

There was an immediate demand for the nimble little boat 35 years ago, so that winter Hinterholler increased the length to 24 feet and began building plywood Sharks in his shed.  Hull number 5 was for a customer by the name of Bill O’Reilly who demanded that his boat be built of a substance relatively new to boat building; fiberglass.  He even offered to teach Hinterholler how to use it.  With fiberglass it took 18 man-hours to produce a hull instead of the 128 hours devoted to a wooden hull, and  fiberglass was virtually maintenance free.  That made his boat the  affordable yacht and Hinterholler and Shark were on their way to  International success.

Since then, more than 2500 Sharks have taken their place in the fleet, both on the North American continent and in Europe.  It rapidly became the biggest one-design keelboat fleet on the Great Lakes and today their are active groups on the east and west coasts and in the Montreal and Ottawa areas.  About 500 Sharks sail the large lakes of Austria, Switzerland and Germany and the waters off the Swedish archipelago.

There have been changes since Hinterholler first designed it, but they have been cosmetic.  The sleek hull, straight stem, and long flat run at the stern, fin keel and spade rudder made it a racer that climbs easily over its bow-wave to achieve speeds in excess of 10 knots.  The six-foot beam and doghouse accommodate a V-berth, two quarterberths with  sink, stove and coldbox, making it a pocket cruiser with sitting headroom.  It draws less than four feet, making it an ideal boat to tuck into anchorages denied deeper draught boats.

The Shark’s prompt success was due in no small part to its early racing record.  In 1960, Hinterholler crewed for George Steffan, later President of Mirage Yachts, in the Freeman Cup.  They cleaned up with three 1sts using brisk 18-knot winds to put a leg them and their nearest competitor in the race.  In the 1963 Freeman Cup the Shark did it again.  For small boats, the course was from Niagara-on-the-Lake to Rochester NY, 80 nautical miles along the south shore of Lake Ontario.  There were no spinnakers and no genoas on Sharks in those days and the race was sailed with main and working jib only.

“We thought our biggest competition would be the “Thunderbirds,” Hinterholler said “but after the first surf, we knew that there would be no contest.  We barreled down the course in seven hours and 44 minutes.”

In 1963, using a spinnaker on a close reach across Lake Ontario, Sid Dakin, one of the first to own a Shark, sailed the blockhouse Bay race from Toronto to Olcott, NY, with an adrenaline pumping average speed of 10.2 knots, beating the 56-footer Innisfree on a boat-for-boat basis.  That sort of speed boggled the minds of sailors unaccustomed to semi-displacement hulls.

Racing boats come and racing boats go, but the shark remains.  With its flexible rig and planing abilities, it is as up to date as anything on the market today.  And, with its low-aspect, 7/8ths rig and heavy keel, it has a sea-kindliness and seaworthiness to match its speed.

Hinterholler admits that the Shark’s scantlings are better suited to a tank, but the proof of his wisdom in overbuilding the boat has been in its longevity.  Virtually each of the 2,500 Sharks built in the last 35 years is still sailing and many of the first hulls off the line are still winning their share of races.

The Shark is seem sailing happily in all major Canadian cruising waters, but some owners have taken them much further afield.  In 1972, Clive O’Connor, his wife, two year old baby and their guitar sailed their Shark from Niagara-on-the-Lake to Melbourne, Australia.  They arrived in good form, still speaking to each other and their Shark, at last report, was still being used for research on Australia’s Great Barrier Reef.

Randal Peart sailed his Shark from Windsor and then crossed over to England, cruised the French canals, and then sailed BACK across and cruised the Caribbean for a year.  He’s still alive and well and eccentric. If you’d like to correspond with him, he’d be happy to hear from you at: StMaker@aol.com

(Editor’s Note: The text of the above paragraph has been changed from the original, to reflect new information from Randal’s wife, Patricia, received on Sept 11, 2000)

On his return, he reported no structural damage and no bulkheads adrift, but he did ask for a new set of gudgeons to replace his worn ones.

More recently, Bob Lush added a foot to the stern of his Shark to bring it up to a minimum 25-foot size for the OSTAR single-handed transatlantic race.  His biggest problem crossing the Atlantic was getting stuck in the doldrums and listening to empty sails slap for too many mind-destroying days.

The Shark is a forgiving boat which makes it appealing to novices, but with 14 separate lines to tweak, it is as technical as any sailor could wish. An active class association defined the Shark’s measurements and specifications as early as 1966 and in 1984, the association adopted a more formal measurement form patterned after a number of international one-design classes.  The fact that all Sharks, both new and old have been built to these specifications has kept the racing fleet viable and maintained the market value of the boat.

The association is active at the international, national and regional levels giving Shark owners who are not part of a local fleet a point of contact and an active racing program.  In addition to regular club races, there are regional, provincial and national Shark Class regattas.  The highlight of each year is the Shark World Championship, a seven race series held for two consecutive years in North America and, in the third year, in Europe.

Host for the 1994 Shark Worlds, won by Don Ruddy in #268 Dartos, was the Niagara-on-the-Lake Sailing Club, the club Hinterholler helped found.  Fifty-six Sharks competed in the 1994 event  The World Championship in 1995, won by John Clark/Don Ruddy was held in Freidrickshaven on Lake Constance.  Several Canadian Shark sailors competed in this event.