By Andrew Kerr
Having recently sailed a 10 race series at Key West Race Week that featured a large part of the regatta with waves and cluster chop. Here is some strategy, tactics and boat handling key elements that can help your team sail a fast and consistent series when the waves are up. 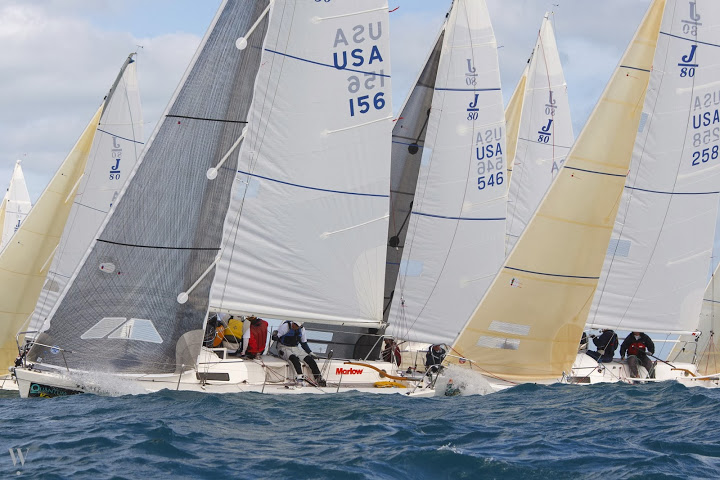 Pre-Race
Which tack is better versus the waves and is there flatter water on the course?
Go upwind on each tack and get a feel for the wave formations and find out which tack is better versus the waves if there is one, very often they are similar.
Do we need to set the boat up differently from tack to tack?
On the harder tack we have found it better to move the lead one hole forward and ease the Jib/ Genoa and mainsheet slightly to sail the boat more open on the leeches to cope with the waves and the rapidly changing apparent wind angles.
On the easier tack the Jib / Genoa lead is typically a hole further back and the sheets trimmed on a little harder as it is easier to point in the flatter water.
Is there flatter water inshore?
At a lot of venues the waves are smaller inshore – research this when you go upwind in the pre-race period.
Communication 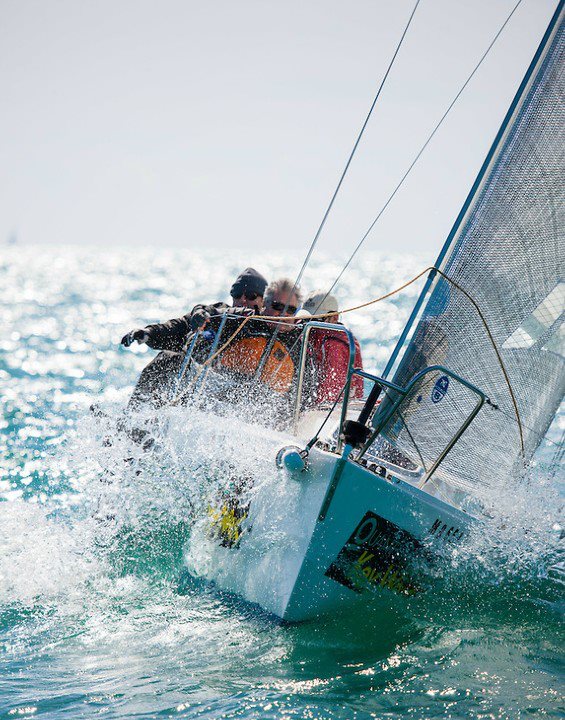 Take time to get the communication flowing from the wave caller in the crucial pre-race upwind leg leading up to the start – if it is constant waves then we have found it is even more critical for the wave caller to call out any flatter water so we can shift gears accordingly – “Flatter water in 3, 2, 1 – now – lasts for 2 boat lengths “is a really important piece of info.
Also be sure to work on identifying flatter spot’s   to tack in, “flat spot to tack in 3, 2, and 1 – now “.
Boat speed wise, if possible we would like to get on on the easier tack so we can get off the line and find our space and go – the driver will appreciate this if you can choreograph it that way!
Which jibe is better or more stable downwind versus the waves?
As an example – at Key West we found the wave axis to be better on starboard tack as the boat could plane more consistently.
In the absence of wind and angle considerations – the better Jibe with the wave axis is going to get us going faster or if the wind is lighter and the waves more confused  – will keep the boat more stable , is one better than the other?  Very often the most challenging conditions are when it is light air with confused waves – is one jibe better than the other for keeping the spinnaker stabilized?
Starting
In decent sized waves it’s really important to get the biggest gap to leeward on the line that you can so that you can go bow down and full speed as long as possible without a leeward boat playing interference .
So strategically we are looking for a low density area on the line, away from crowds and in a place to sail to flatter water on the course or the favored side which at quite a lot of venues is inshore.
Upwind

Best of luck in your next race or regatta and May the waves be with you!