Close
You are here: Home / Archives for 505 midwinters results

–FOR IMMEDIATE RELEASE– 505 Class All-Stars Rumble at Midwinters
St. Petersburg, Fla. — Mark Zagol (Stonington, Conn.) and Drew Buttner (Westwood, Mass.) bested the nation’s top 505 sailors to win the class’ 2015 Midwinter Championship this weekend, breaking a three-way tie in the final race.  For the entire six-race series the tricky St. Pete breeze kept the top six boats guessing, constantly trading places and often finishing within only a few boat lengths of each other, a rarity for a class whose focus on boatspeed is known to see splits times of minutes not seconds.

Macy Nelson drives with Reeve Dunn on the trapeze, training before the 2015 505 Midwinters

It was the first Midwinters win for the pair, adding to a handful of regional and North American titles captured since they began sailing together in 2012. “It’s hard to beat the Floridians,” said Buttner, referring to accomplished class veterans like former world champion Ethan Bixby (sailing with Chris Brady), who finished one point behind Zagol/Buttner, and Augie Diaz (sailing with 2014 world champion crew Rob Woelfel) who took third. 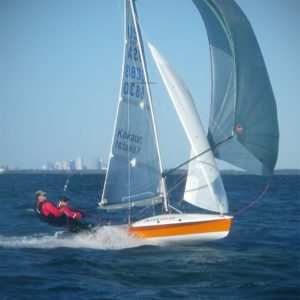 Some of the champions’ success, says Buttner, can be attributed to the training sessions Wednesday and Thursday, run by some class members from the east coast. On those days St. Pete delivered colder temperatures and big breeze up to 25 knots. While this regatta is traditionally sailed in the open water of the Gulf of Mexico, swells left over from a storm earlier in the week relegated the fleet to Tampa Bay, which brought unique challenges for the three race days. Friday saw excellent flat-water conditions for the first three races, but Saturday became trickier, leading to a couple of abandoned races. Sunday offered shorts and flip flops weather, but not enough wind to go sailing, so the fleet got an early start on their trips home.
This mid-winter meeting of the 505 class is not only a pleasant way for snowbound sailors to stretch their trapezing muscles, but is also a training event for some big time upcoming regattas. Reigning World Champion Mike Holt (Soquel, Calif.) booked his cross country trip to St. Pete knowing he would have plenty of quality sparring partners. “Great week of training, full range of conditions, fun group, great racing. It was a perfect way for us to get some time on the water before the 2015 worlds in South Africa next month,” said Holt, speaking of his longtime crew Carl Smit. While the pair have finished second sailing together at multiple World Championships, Holt earned his 2014 honor with crew Rob Woelfel.

Also coming down the pike are the 2015 North American Championships in Annapolis, Md. and the 2017 World Championships at the same location. This could be the start of the East Coast ramp-up to Worlds, says Buttner. All six of this regatta’s top finishers have their sites set on that event, but this class has a culture of teamwork, and the 505 American Section will be working together to make a strong showing on its home waters.

While this year’s fleet was stacked with top talent, overall the fleet was a little short on size expectations, partly due to the breakdown of a three-boat trailer carrying entries from Annapolis. One of the three pairs was able to borrow local sailor Zack Marks’ boat and compete. Alexander Meller recalls, “pulling frogs, lizards and a snake out of Mark’s boat.” with his skipper Lauren Schone. “The snake was pulled out Saturday morning, so had raced with us Friday,” said Meller. “The snake had no comments about 505 racing.”
All photos by Ethan Bixby