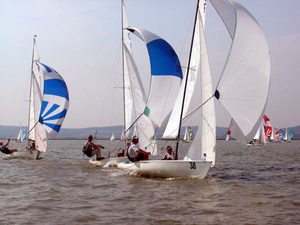 It was in the late 40’s that the IYRU (now ISAF) instigated a new modern 2-man international dinghy, the Tornado. She was not a success as there was no leap forward compared to the existing pre-war classes.

The Royal Loosdrecht Yacht Club, Conrad Gulcher’s club, obtained half a dozen Tornados and found them very uninspiring to say the least! Conrad had always been very interested in dinghy sailing and had collected any documentation connected with it. Pre-war he had enjoyed some international sailing in Germany and the UK and he had made many friends in the dinghy sailing scene. He imagined that with modern construction methods, moulded ply, a better boat could be constructed.

Being an Insurance Broker and not a designer he enlisted the help of Uus Van Essen, a naval architect and measurer for the Dutch Yacht Federation. They made a preliminary design and early in September 1951 it was sent to 30 top class helmsmen in Europe including Bossom (Z – SUI), John Cahmier (K -GBR), Charles Curry (K – GBR), Manfried Curry (G – GER), Ferry Laagwater (H – NED),Stewart Morris (K – GBR), Morits Skaugen (N – NOR) and Shorty Trimingham (KZB – BER), with the request to comment within two weeks.

The measurements were similar to the 15m2 Wanderjolle of mid-European lakes and popular Flying Fifteen. By the end of September 23 responses had been returned with sufficient new and sound ideas to redesign the boat.

Mr. Loeff, chairman of the CBC, was prepared to discuss the boat at the November meeting of the IYRU, only when he had seen her sail! This was hardly feasible but Conrad had the mould and hull built in one week and the boat finished in another! Complete with the Tornado rig it took to the water against the 12m2 Sharpie and Tornado at Loosdrecht one week before the IYRU meetings and Mr Loeff took the plans to the IYRU for discussion.

Then it was decided to hold trials in the summer of 1952 in Holland and the name the “Flying Dutchman” was born, suggested by Sir Peter Scott, the then president of the IYRU.

The trials were held on the Loodrecht lakes and on the open water of the Zuiderzee at Muiden. 17 boats participated, some especially designed like the Osprey and Typhoon, others were existing classes including Hornet, Caneton, Thistle, Sharpie, Rennjolle etc.

The results were clear and the FD was adopted however with the limitation “for continental lakes only” and another set of trials was set up for 1953 at La Baule on the open sea.

In the mean time the small job was replaced with the Genoa and a trapeze was added.

At La Baule there were again specially designed boats such as the Coronet, a smaller version of which later became the 505. Off the wind the Coronet with her bigger spinnaker and mainsail was faster (this is not just a recent problem!) but on the wind the FD won.

It was clear that the FD did very well on the open sea and the “lakes” limitation was lifted. The Class started to blossom thanks to the promotional activities of Conrad through the Bulletin and a well structured Class Organisation.

By the 60’s there were fleets in all sorts of places such as the Lebanon, 25 in Morocco, 20 in Portuguese East Africa, Argentina, Venezuela, Thailand, apart from those in Europe, North America, South Africa, Australia and New Zealand.

In 1956 the FD participated (Conrad and Bob Boeschoten) in the cross- channel race from Folkestone to Boulogne and was the fastest two-man dinghy in the race!

In 1957 the FD was selected to replace the Sharpie at the 1960 Olympic Games in Naples. In 1959 The Class President Slotty Dawes was presented a cup for the FD Week. The Week, with its unlimited number of boats were allowed from each country, this proved very successful. The Week was very competitive whilst remaining friendly, competitors lent each other sails! (no equipment limitation in those days!) and was well supported, in 1965 126 boats from 24 nations took part.

The FD rules were tailored to have one design speed factors i.e. hull shape and weight, foil shapes and sails restricted and the rest left open to encourage development. As new ideas have evolved they have often been taken up by other classes e.g. trapeze, spinnaker chute, double floor construction, windows in sails and numerous developments in fittings and even personal sail numbers.

The one design was guaranteed by the very simple, and consequently cheap and easily repeatable measurement system defined by Uss van Essen and born of his experiences as professional KNWV measurer.

Following the loss of Olympic status soon after the 1992 Olympics, the “Olympic circuit” regattas ceased to be available to FD sailors and there was a decline in the amount of international competitive sailing. However the FD became a realistic option for those without Olympic ambitions and numbers at World and European Championships when held in Europe remain high. At the 1995 FD worlds, 123 FDs raced from the same start line on Lake Garda, a stunning spectacle.