Close
You are here: Home / Archives for icsa awards

NEWPORT, R.I. (May 31, 2019) – At an awards ceremony following racing for the Gill College Sailing Coed National Championship at Sail Newport Sailing Center at Ft. Adams, the honors for the Marlow Ropes College Sailor of the Year, Robert H. Hobbs Sportsmanship Award sponsored by US Sailing and the Leonard M. Fowle Trophy for the Best Overall Team were presented. The names of the winners will be added to the ICSA Hall of Fame display located in the Robert Crown Center at the U.S. Naval Academy in Annapolis, Md.

The Everett B. Morris Trophy is awarded annually to the Marlow Ropes College Sailor of the Year for outstanding performance at the highest level of sailing in the collegiate year. The trophy is named in memory of a distinguished journalist who spent more than 30 years, as a yachting writer and editor.

Although each of the sailors had an incredible year of competition, the winner, calculated by the numbers, is Nicholas Baird. 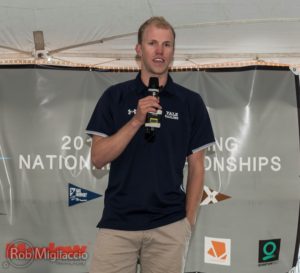 “Nic sailed well all year,” says Bill Healy, associate head coach for Yale. “It was great to see him get this award. He’s the kind of guy who is on top of everything and leaves no stone unturned. He’s a great student academically, but also of the sport.”

In Baird’s award ceremony comments he exclaimed how much fun college sailing is and all of the good friends he has made on the water.

“Putting me in this group of finalists with Augie and Chris – they are both awesome and it felt like a toss of a coin to see who among us would win the award, ”says Baird, “they both sailed really well this year too.”

“My Dad got me into sailing and my whole life has been sailing,” says Baird, who was born in Newport, R.I. while his Dad was training for the America’s Cup in Newport, but grew up sailing in St. Petersburg, Fla.
Baird graduated from Yale this spring with a double major in political science and history and plans to sail IC37s this summer.

The Fowle Trophy honors the late Graduate Secretary of the New England District and Executive Vice President of the ICYRA/NA. Len served in both posts from their creation until his death in 1973 and his devotion to college sailing is without peer. College sailing today had its very beginnings in the organizational ability and 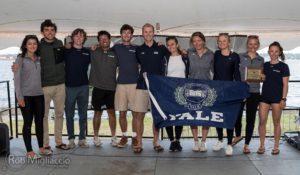 personal drive of this one man.

This trophy is awarded to the team of the College or University with the greatest number of Fowle Trophy Points.

The winner of the Leonard M. Fowle Trophy for best overall collegiate team is Yale University, who had an impressive record especially in the spring season. View further calculations for the Fowle Trophy here on the College Sailing website.

The Robert H. Hobbs Sportsmanship Award is awarded annually to the Sportsman of the Year. The trophy honors Robert Hobbs (MIT ’64), past Executive Vice President of ICSA, past President of U.S. Sailing (1992-1994), and former chair of the U.S. Sailing Olympic Committee. 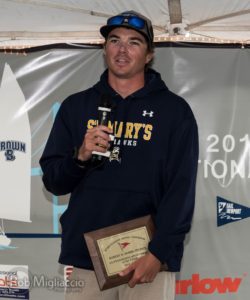 “My coaches, Adam Werblow and Bill Ward, tried to teach me early on that sailing is even better when you’re having fun,” says McCarthy, “and I finally caught on.”

One of McCarthy’s fellow competitors describes him as a true sportsman and a force of positivity on his team.

The Intercollegiate Sailing Association (ICSA) also announced the 2018-19 All-American Crews, Coed Skippers and Honorable Mentions (the Women’s All-Americans were announced at the Sperry College Sailing Women’s Nationals awards ceremony). The names of the winners will be added to the ICSA Hall of Fame displayed at the Robert Crown Center at the U.S. Naval Academy in Annapolis, Md.

To select an All-American skipper, the committee evaluates a competitor based on their competitive record in inter-conference competition as well as conference and national championships. The committee analyzes how this record compares to fellow competitors, the quality of the competition the record was achieved in, and results achieved competing with different crews, the span of the record over the fall and spring seasons, and how the record compares to previous All-American winners in past years.

For All-American crew selections, the committee uses criteria similar to skipper selection, but also considers: demonstrated leadership (may consider seniority), outstanding body mechanics and boat handling skills as well as proven ability to improve the results of the skipper(s) with whom he or she sails.

The committee selects up to 18 Coed All-American skippers and additional Honorable Mentions, together totaling no more than 25 and up to 20 All-American Crews and additional Honorable Mentions together totaling not more than 30 honorees. The committee is not obligated to select the maximum number of honorees.

Here are the names of the All-American Coed Skippers, Crews and Honorable Mentions. 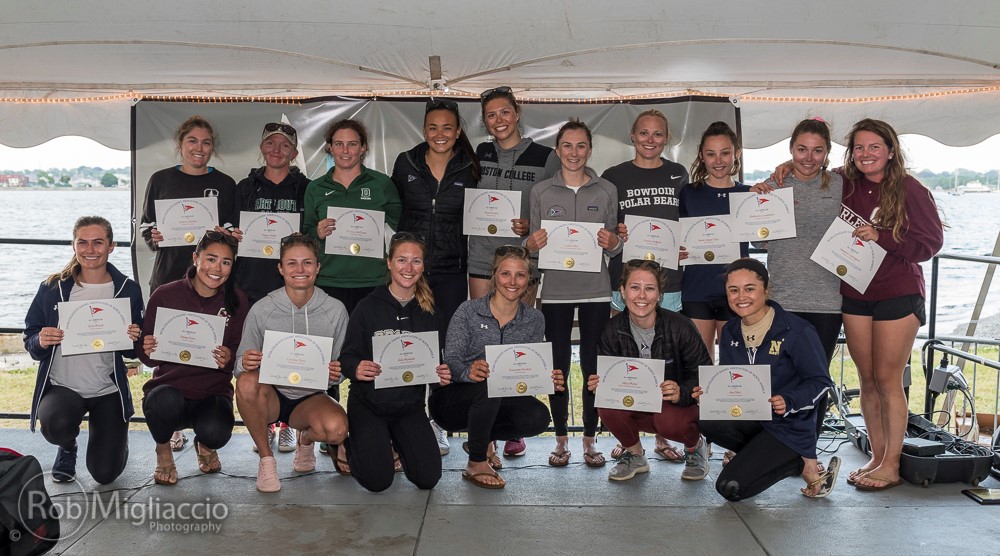 To learn more about the teams competing in all of the events and to follow the racing and results visit the event website: https://2019nationals.collegesailing.org/