Close Mobile Navigation
You are here: Home / Archives for jet 14 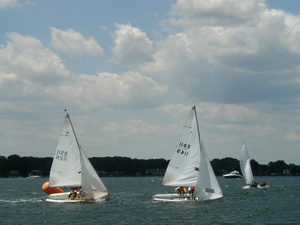 Designed and first built in the 1950’s, Jet-14’s have been crafted as a high performance, spinnaker rigged, 2 person dinghy available at a marginal cost. Their simple rigging, planing capability, and stability make it ideal for all sailor levels and a variety of wind conditions. Over 1160 Jet-14s have been built and compete in several regattas and events held across the Mid-Atlantic and Midwestern United States.

The initial plan for Jet-14’s came from a group of New Jersey sailors who were dissatisfied with existing One-Design classes in the 1950’s– they vowed to create a new boat, one that had five fundamental features: strict one-design in all speed-producing elements, good performance, minimal cost, minimum maintenance, and easy handling and transporting. Howard V. Siddons, a boat builder and sailor, designed the Jet-14 by  combining the sail plan of a Snipe and the hull lines of a Uffa Fox International-14. The boat was simple, inexpensive, and easy to build and included features such as a metal centerboard. The heavier board made the boat difficult to capsize, attracting junior sailors as well as husband and wife teams since heavy crew was not necessary for successful sailing in the Jet. From there, the Jet-14 gained popularity and established itself as an official class with a class association and registered trademark. By the 1960’s, there were 600 boats registered with the class. During  the 1970’s, new specifications were added, including a spinnaker, mid-boom traveler, and furling gear for the jib. The 1970’s were a huge boom-period for Jet-14’s. After a decade of decreasing activity during the 1980’s,  the class made a comeback in the Midwest by bringing in more junior sailors. Throughout the 2000’s and 2010’s, Jet-14’s have been mainly active throughout the Midwest and the South. Today, the biggest fleets reside in Ohio and North Carolina.

The Jet-14 class continues to race and hold regional and national regattas, with the most recent National Championships being held at Severn Sailing Association in Annapolis, MD in 2019. Nationals are held every year in a different location and are great events for members to come together and enjoy camaraderie and exciting racing. Other events typical on the Jet-14 calendar include Cleveland Race Week, The Southern Comfort Regatta in Asheville, NC, and the Labor Day Regatta at Lake Norman, NC. Most recently, Jet-14’s participated in the Board Bash Regatta at Lake Norman, a major One Design regatta that featured over 100 boats. Even though the Jet-14’s continue to participate at many events, the class has struggled to retain members over the last few years, losing several 60 year old fleets in New Jersey and Maryland. With many race ready boats on the market and a trusted boat builder in Allen Boat Company, the class is poised to rise again. If you are interested in learning more about this classic One Design dinghy, visit the Jet-14 website (jet14.com) to read the class history, view design specifications, view available hulls, and find Jet-14 sailors in your area.

More History of the Jet-14

In the fall of 1952, racing skippers on Barnegat Bay, New Jersey were discussing the merits of the various existing one-design racing classes. They did this quite often, and there was a substantial amount of dissatisfaction with the classes which were in common use. They were either too big or too small, too tricky or too slow and most of them were too expensive or not strict enough one-designs.

These skippers, as all groups of racing skippers, did not agree entirely on what the ideal boat should consist of. They did, however, agree on many fundamental desirable features. They wanted the following:

Howard V. Siddons, well known Barnegat Bay skipper and boat builder, decided to try to meet their specifications. He did this very successfully in the ingenious combination of the sail plan from the very popular Snipe and the hull lines of the Uffa Fox International-14 Alarm (dating back to 1935). This narrow transom, deep rocker design won three Prince of Wales Cup races. Until Uffa’s time there were dinghies that planed on occasion, but there were no true planing dinghies. This design dominated the International-14 Class until 1950. It was from one of these craft that the mold for the first Jet-14 was taken. The hull was readily available in this country and provided a light weight planing design along with the low maintenance found in other classes. The combination of the two basic elements (hull & rig) worked exceptionally well, and Siddons, along with Harry Sindle, created a boat that was well-balanced in appearance and sailing qualities.

In designing the first of these boats, Siddons went to extremes in order to keep the boat simple, inexpensive and easy to build. He decked the boat over for appearance, comfort and safety, although she was generally dry enough not to need decking to shed water. The spars were kept solid, and equipped with sail track for the benefit of the amateur builders. A metal plate centerboard was decided upon, which eliminated expensive lead castings and troublesome centerboard gaskets. Plans, patterns and instructions were furnished for the do-it-yourself sailors, with the majority of the elements coming from stock size lumber.Initially, there was no thought of using this boat for juniors. The design was thought “too hot” and not safe enough. But the youngsters themselves didn’t believe that. They took such a shine to the design that about 60% of all Barnegat Bay Jets were skippered by sailors under 18. The reasons that they were able to get away with it, even on blustery days, are these:

These features also make the Jet-14 attractive to another group, the husband and wife team. They can handle this boat successfully with a minimum of physical exertion and a maximum of racing enjoyment. There is no need for a crew like a “gorilla,” as in some of the large two-man boats.

The Class Association was started April 17th, 1955 to run the class business, organize the racing and protect the one-design features of the boat. In 1956, the boat specifications were established. Dues were set up and measurement certificates were prepared and distributed. Copies of the Constitution and By-laws were printed. The class newsletter, “Jet Blasts,” was first published and a regatta schedule was drawn up.

In September of 1957, the Jet-14 trademark was registered. In 1960, the Dubdan fiberglass Jet was entered in competition. 1962 brought interest in aluminum spars. The self-rescue (tanked) boats made their appearance in 1965. In 1970, a spinnaker was approved for use in the 1971 Nationals. The mid-boom traveler and furling gear were also approved in this year. The 720 rule went into effect for the ’74 Nationals. The Silver Chevron Regatta was added to the schedule for 1976. The Jet-14 Class celebrated its’ 40th anniversary in 1995. The class currently claims more than 1,140 boats in 20 active fleets. The Association runs senior and junior national championships each year and sanctions almost thirty open regattas.