St. Thomas, U.S. Virgin Islands. Dialing in the right combination of scores proved the secret to success for Team USA Worlds, who won the TOTE Maritime Team Racing Championships on Thursday. The Championships are one of a trio of events sailed this week out of the St. Thomas Yacht Club (STYC) and were prefaced by the three-day TOTE Maritime Clinic and followed by the 27th International Optimist Regatta, presented by Electronic Merchant Systems (EMS) Virgin Islands, Friday through Sunday.

“We had never sailed against the other team and didn’t know how good they were. They were pretty good,” says Walshe.

“On that last race, we had a good start and were in the right combination,” says Redmond. “The key is to have an unstoppable combination of scores. We had that in the last race.” 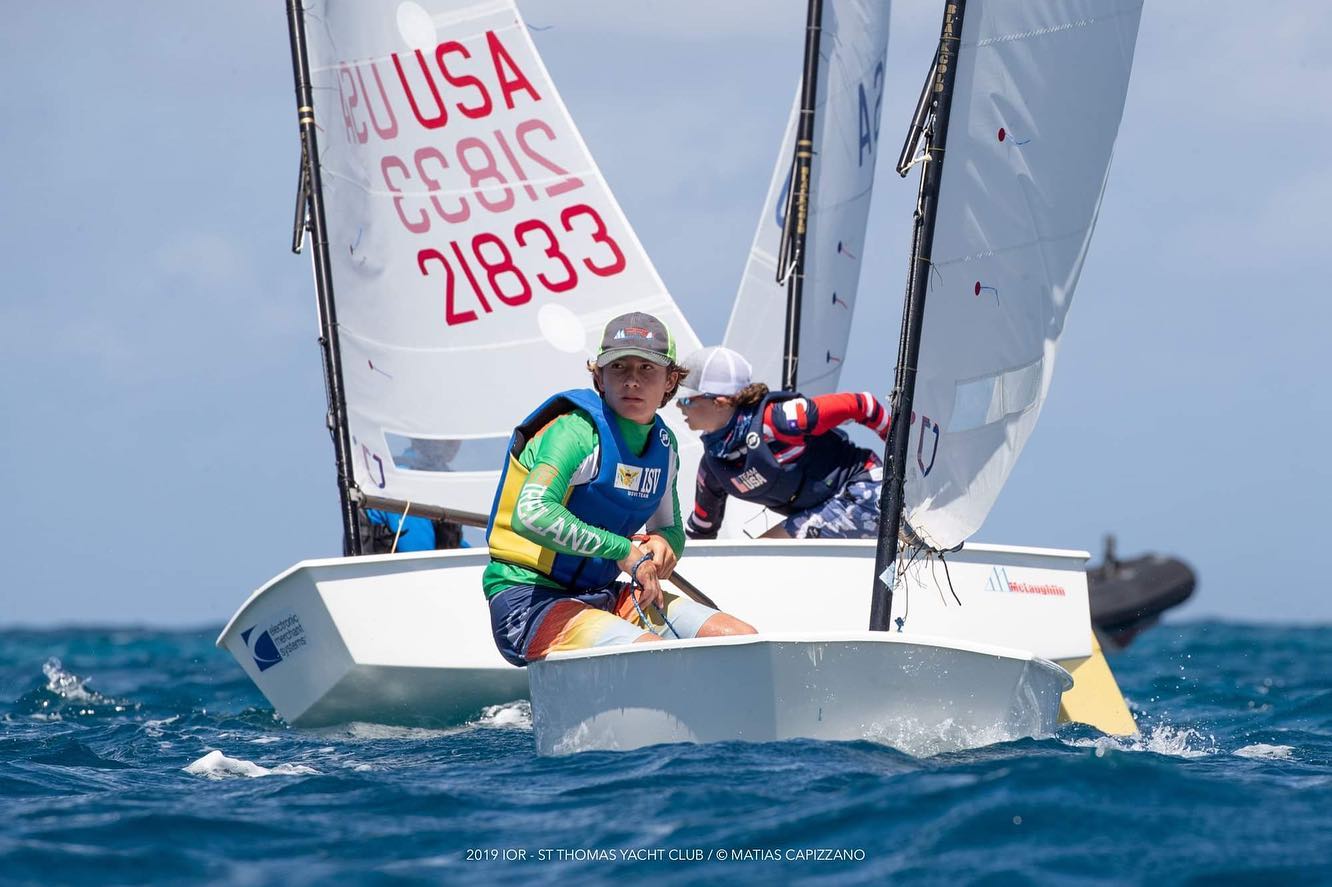 “I was really able to improve in my starts. That was one of the best parts of the clinic, That, and meeting lots of new people,” says 14-year-old Julia Jacobsen, representing the Royal Hong Kong Yacht Club. Jacobsen added that she and her family traveled nearly halfway around the world to St. Thomas as they felt the IOR would offer an excellent tune-up opportunity before the Optimist World Championships next month in Antigua.

The clinic ended with a Volvo Ocean-style race, where sailors completed four legs around the east end of St. Thomas.

“It was like sailing 4 separate races because each leg was scored individually,” tells 12-year-old Tanner Krygsveld, from St. Thomas, who won the event and who with Winn Majette and Alejo Di Blasi from St. John, and Milo Miller and JJ Klemplen from St. Croix, will represent the territory at the Optimist Worlds. “Local knowledge really helped.”

This is the 11th consecutive year that TOTE Maritime have sponsored both the Clinic and Team Race.

The 27th IOR/EMS gets underway Friday. The near-record 114 junior sailors are represented by both Championship and Beginner fleets. The Championship fleet is divided into age groups: White (age 10 and under), Blue (ages 11 and 12), and Red (ages 13 to 15). The race committee plans to run 10-plus races over the next three days, depending on weather. To kick-off the event, the sailors all took part in a Parade of Nations, led by a colorfully clad stilt-walking Mocko Jumbie.

“We are always happy to support events at the St. Thomas Yacht Club,” says Alani Henneman Todman, director of communications at the U.S. Virgin Islands Department of Tourism, who attended the Parade of Nations. “Sailing is a sport that builds character, strength and confidence and that helps our sailors to be the next ambassadors for our territory.”

U.S. Virgin Islands Senator, Athneil ‘Bobby’ Thomas, a strong advocate for sports in the territory, especially the many Olympic sports represented such as sailing, was also on hand for the Parade of Nations.

“This event is a dream for sports tourism. This is especially true because the IOR focuses on the youth. This means there are years of potential ahead for them to remember the excellent time they enjoyed here and return again to renew old friendships and build new ones,” says Senator Thomas.

An Awards Ceremony will take place on June 16.

This year’s event will follow an eco-friendly theme. Sailors will be encouraged to recycle all plastic water bottles, use the reusable water bottle in the goodie bag throughout the regatta, keep all lunch bags and wrapping out of the water, pick up any trash on shore and accept drinks without straws.

For more information, call (340) 513-2234, Email: internationaloptiregatta@gmail.com. Or, for the Notice of Regatta, Registration Form and Results, visit the St. Thomas Yacht Club web site at www.styc.club or www.regattanetwork.com

U.S. Virgin Islands Department of Tourism. The U.S. Virgin Islands are located in the Eastern Caribbean 1,100 miles southeast of Miami, Florida, USA. Each of the three major islands–St. Croix, St. Thomas and St. John–possesses a unique character of its own. Visitors can enjoy a wide range of watersports as well as immerse themselves in the territory’s rich culture by enjoying historical tours, culinary encounters, artisan fairs, parades, storytelling and other special presentations. www.visitusvi.com