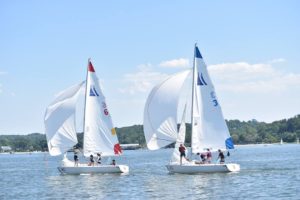 The U.S. Youth Match Racing Championship for the Rose Cup was held last weekend by Oakcliff Sailing and Seawanhaka Corinthian Yacht Club, in addition with the support of US Sailing and the event sponsors, Gill North America, Hobie Polarized Sunglasses, NBSSA and North U. The Competitors must have reached their 16th birthday, but not their 21st birthday during the calendar year in which the event is held. The U.S. Youth Match Racing Championship (“USYMRC”) for the Rose Cup is an invitational event based on Requests for Invitation from qualified skippers. The event is classified as a World Sailing Grade 3 event with teams consisting of crews of four with at least one male and one female and a maximum crew weight of 680 lbs. 10 teams competed in Sonars for this year’s event.

History: The Rose Cup started as an invitational youth match racing event in 2010. It was founded by members of Balboa Yacht Club in Newport Beach, California, and the Newport-Balboa Sailing & Seamanship Association (NBSSA). Its mission is to assist in the promotion of youth match racing in the United States and improve the quality of US competitors in national and international competition. Thanks primarily to the efforts of US Sailing Match Racing Committee Vice-Chair and five-time US Match Racing Champion, Dave Perry, US Sailing made the event one of its three match racing championships, and it officially became the U.S. Youth Match Racing Championship in 2015.

At each USYMRC, the presentation of the Nick Scandone Sportsmanship Award is always a highlight. This trophy was named for the late US Paralympic Gold Medalist Nick Scandone who, in addition to winning the Gold Medal at the Beijing Olympics in 2008, was beating both able bodied and physically challenged competitors throughout the last year of his life as he fought ALS or “Lou Gehrig’s Disease.” Nick’s persistence against seemingly insurmountable odds provides inspiration to winners of the Scandone Sportsmanship Trophy and to all sailors. The Rose Cup was named by NBSSA for America’s Cup, Congressional Cup and offshore tactician Andy Rose, for his contributions to youth match racing for the Governor’s and Rose Cups.

Day 1: The first day of the National Youth Match Racing Championship for the Rose Cup was a sunny day with 7 knots of breeze from the Northwest in the forecast, but the only thing sailors had when they got onto the water was calm glass. The ten teams of four, most of whom hail from Southern California. All eyes were on these young, talented sailors to see what they can do, especially after two days of coaching from match racing legend Dave Perry. 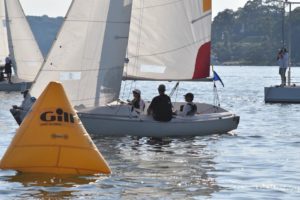 Day one of racing started hot and windless. We saw signs of a Southerly and loaded the sailors into Seawanhaka’s Sonars to be towed out to the race course. While they waited for the wind, the kids kept cool and had some fun with an unofficial flip and dive contest. When the breeze filled in around 1pm, it was blowing 4-6 knots from the Northwest.

“Trust your eyes!” was the advice that coach Dave Perry shouted to the competitors as they prepared for the first flight of the day. With a fluky four knots of breeze, the teams that could spot the pressure came out on top.

“I would identify the puffs and the favored side, relay that back to the rest of the crew, and then we would all talk about it,” said Cameron Feves’ trimmer, Tanner Chapko. Feves and his team from Cabrillo Beach Yacht Club went undefeated all day. Another winning strategy was leading back to the line in the prestart. “A lot of competitors have been starting late but it’s too costly in this light wind,” said Feves’ bowman Lukas Kraak. “Most of our races were won at the start.”

Jack Parkin and his team from Riverside Yacht Club, who also went undefeated, employed the same strategy. In their Flight 5 match against Porter Killian they hit the line in the lead with speed and that’s where the race was won. 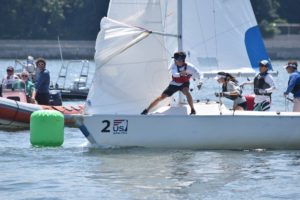 Day 2: Day two of the US Youth Match Racing Championship began the same as the first day: an AP flag drooping under the hot summer sun. Despite the heat and lack of wind, there was certainly no lack of youthful exuberance amongst the sailors or coach Dave Perry.

“We’ve had a lot of long hours waiting for the wind but we kept each other laughing and had a lot of really good conversations,” said Jack Parkin’s pit person, Ashton Borcherding.

The breeze filled in at about 4pm with a shifty 4 knots gusting 6 from the South. In Flight 7 of the first Round Robin, Parkin and his team from Riverside Yacht Club (CT) duked it out with Cameron Feves and his team from Cabrillo Beach Yacht Club (CA). The two undefeated teams went toe to toe in a classic East Coast versus West Coast showdown. After an intense dog fight in the playground they started neck and neck on the line but it was Jack Parkin who took the win.

“Our winning strategy has been something Dave Perry says to us often: you can’t really win races, you lose them,” said Parkin. “Everybody is going to make mistakes so it’s about minimizing how big they are and how often they happen.”

“We saw some big pressure coming down from the left and we knew there was less current too,” said Wood’s bowman Daniel Pegg. “We thought we could dig into that lefty and ride the lift up to the weather mark so we went for it and it worked out.”

“I couldn’t have been more proud of the way the 40 competitors dealt with the long hot delays,” said regatta coach Dave Perry; “they kept their spirits up, and as a result the racing was competitive with many passes on the course, which is the sign of expert match racing.”

Day 3: The lack of wind resulted in no sailing on the final day. Oakcliff Sailing organizer Bill Simon said, “We were happy to get the whole round robbin in given the weekend conditions.” 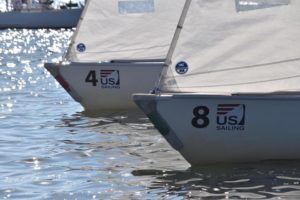