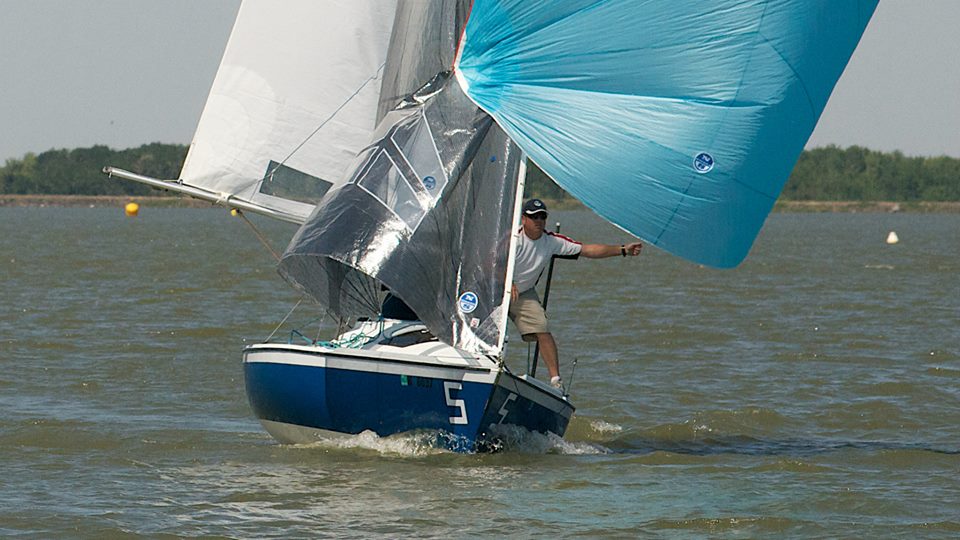 Ah, spinnaker takedowns; either they go really well, or really bad. Your team is approaching the leeward mark on port tack  getting ready for a port rounding , the mainsail controls are preset for upwind trim, the headsail is hoisted and the halyard is set to the conditions , the  spinnaker pole is taken down and stored and then the spinnaker smoothly douse’s on the weather side .
Your team executes a tactical rounding around the mark and looks for the next opportunity going upwind.
Let’s look at the key ingredients that went in to that windward takedown working so well as part of your team’s boat handling repertoire for both symmetric and asymmetric spinnakers ( A Sails) and also a check list for both sails on the takedown.
The approach, steering & trimming:
An effective approach when there is enough wind to fill the spinnaker consistently ( above 7 knots)  is to sail a little higher of the leeward mark so that you can bear off and make it easier for the crew to get the sail around the forestay.
If you find yourself reaching into the mark, either as a result of a wind shift or over standing the lay line approach then try to sail as high as you can in the lulls so that you can ultimately bear away and help facilitate the douse, this is particularly important on boats with large spinnakers and when the breeze is up.
With a symmetric spinnaker the skipper should bear off as the pole is stripped (taken down) and the guy is brought back as the spinnaker will have a tendency to oscillate behind the mainsail and collapse.
It is common to see teams struggle to fly the spinnaker when the pole is stripped; the spinnaker oscillates forward behind the main and headsail and collapses whilst the trimmer saws the sheet and guy back and forth, this can be avoided!
Bearing off and pulling the guy back will help the spinnaker get away from the blanketing  effect of  the mainsail  enable the trimmer to free fly the sail effectively.
Heel the boat to windward with crew weight (if enough wind):
This key element on a windward takedown on both the Symmetric and the A sail is If there is enough wind to fill the spinnaker fully and keep the mainsail fully filled – then moving weight to windward as the pole is stripped or when the A sail is close to dousing but you still want  the sail flying is the way to go.
On a lot of boats it’s just a matter of the trimmer and another crew member leaning out to windward or the skipper helping heel the boat to windward. How much wind will dictate how much weight is required but all that is needed is enough to heel the boat to weather about 10 degrees.
What this does is counteract the head of the spinnakers natural tendency (especially with weight to leeward) of oscillating behind the mainsail and collapsing.
How much time do we need for the takedown?
Practice is everything here with lots of repetition using an old spinnaker so that a multitude of mistakes can be made without the risk of ruining a racing sail.
I remember during one practice prior to a J24 North American championship we made numerous uncharacteristic basic errors on the takedowns.
After a full day of practice we were able to get it out of our system and go ahead and execute high level takedowns during the regatta, it’s really crucial to go through that process, especially if you have any new crew aboard or have not sailed together a great deal or it has been a long time since you did sail together.
Very often teams do not have time to practice, modern life demands seemingly take away that time, so the practice douse prior to the start is the time to make and identify any mistakes and correct them.
It can be something like the Jib halyard tail (for want of a loose flake and a toss away from the turning blocks) making its way into a Jib sheet ratchet block, the Jib furler line turning into a monkeys fist as the Jib is unrolled or the port spinnaker sheet dragging behind the boat as the boat rounds and exits the leeward mark – one messing up the Jib trim, the other providing distraction, all easily avoided.
A knowledge of times and distance is an important element here – if we are on a 40 foot boat travelling 6 knots we travel a boat length in approx. 4 seconds, if we are on a 24 foot boat doing 5 knots we will take approx.. 2. 5 seconds to travel a boat length. This where having a speed and distance chart is really useful for gauging how much time the crew needs – the mark is 10 boat lengths away, we are going 5 knots on a 24 foot boat –then we have about 25 seconds to douse the sail prior to the rounding plus the added fudge factor if some element of the boat handling takes longer – sometimes referred to as budgeting “screw up distance”!

Let’s look at a check list for each sail on the douse, please add your own for your own particular boat with its crew requirements.
Check list for a Symmetric windward spinnaker takedown (we will assume there is enough wind to fill the spinnaker):

Check List for an A sail windward takedown:
Note – steps 1 And 2 from Symmetric spinnaker checklist applies.
3) Skipper bears off; trimmer unloads the spinnaker sheet, boat heels to windward with some crew weight.
4) Tack line is blown – this collapses the spinnaker
5) Trimmer pulls in the lazy spinnaker sheet to help get the spinnaker around the forestay; this also takes the slack out of this sheet to stop it dragging in the water after the rounding.
6) The forward crew gathers in the foot and then once that is under control and the sail is all on the windward side the halyard is let down commensurate with how the takedown is going as the leech tape is pulled down to deck level  , the pole is retracted  as soon as possible. Some teams retract the pole immediately on the takedown to help collapse the spinnaker.
7) The team rounds the mark with only absolutely necessary clean up performed – the spinnaker is doused and under control. Boat speed and hiking is key right now.
Late takedown:
Very often the takedown is late – for tactical reasons or because of mis timing issues or lack of practice or new team members in training.
In this instance the key thing is to get the spinnaker on the windward side to stop it shrimping and down to deck level to prevent it from blowing back into the foretraingle and ultimately off the back of the boat.
Getting the foot around the forestay and then pulling down the leech tape to get the sail to deck level will enable the skipper to make the turn upwind. I have even seen forward crew lay on the sail to keep it down so the turn upwind can be made – whatever it takes!
Conclusion:
Taking every opportunity to practice takedowns grows a confidence in the team to be able to execute the douse at the leeward mark in a wide variety of wind and sea conditions.