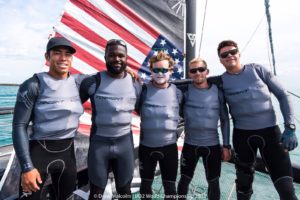 A team supported by the St. Mary’s College of Maryland Boat Foundation recently competed in the M32 World Championship held in Chicago from September 20th to the 23rd. The program was organized by St. Mary’s College alumn Markus Edegran and his team of top notch younger sailors. The M32 is a high performance foiling catamaran class which attracts many of the top professional sailors in the world. The twelve teams consisted of many World Champions, America’s Cup Winners, Olympic Medalists, and Volvo Ocean Race sailors. This event was the culmination of a very interesting story for the St. Mary’s College team, finishing a very respective 7th place in a competitive fleet.

Markus Edegran started competing in the M32 on the World Match Race Tour in the 2017 season. Edegran crewed for Malcolm Gefter in an event in Newport and after the regatta had finished, Gefter said he would be happy to donate his M32 to the St. Mary’s College sailing program. Edegran called the college and asked if they would be willing to accept the donation and support the racing of the boat. The St. Mary’s program was more than happy to support an Alum in one of the highest levels of sailing. Edegran said, “the goal was to have a strong presence at the 2018 World Championship in Chicago and showcase the kind of sailing you can do after graduating from St. Mary’s College of Maryland and competing on the college sailing scene.”

Skipper Edegran started to put together the five member team. On the traveler was Matthew Whitehead, who has a great deal of experience in high performance catamaran sailing. Whitehead grew up sailing the F18 catamaran and has been the youth world champion four times with his skipper Taylor Reiss. Reiss also joined our team early on. Australian Cameron Seagreen who has experience in the M32 on the World Match Race Tour was the trimmer. Mustafa Ingham from Bermuda was the powerhouse of the team, making sure the boat got around the course super fast. Ingham spent a year training on the GC32 for the last Red Bull Youth America’s Cup in Bermuda. The team members hold a resume of consisting of two Youth America’s Cups, eight Youth World Championships titles, and a Match Racing World Championship title.

“The team spent a few weeks preparing for the M32 Worlds in here in Chicago. Several teams gathered for a pre-worlds regatta. We were newly formed and thrown into the mix with highly experienced opponents. After finishing the practice event in 5th place, we had a long list of areas to improve on. We spent the time between the practice event and World Championship getting tuned up and ready to go.

The first day of the 2018 M32 World Championships saw very light winds. We managed to get a clean start and stuck to the left side of the course in the first race which led to us finishing 2nd. It was a great way to start to the event. As the breeze lightened, race two provided to be very tricky with the team finishing in 9th. A third race was attempted but the wind did not cooperate and racing and concluded for day 1. Our team was sitting in 4th place overall after day 1.

Day two brought the opposite problem of day one, with high winds causing a slight delay. With wind speeds averaging in the mid twenties resulting in very intense and unforgiving racing. Five races were completed very quickly before racing was called for the day due to breakages and fatigue. Unfortunately, the races for our team did not unfold as we had hoped. We found ourselves in good positions throughout the day but often fell on the wrong side some very shifty conditions. In the final race of the day we managed to lead from the start only to have a breakdown which kept us from trimming our mainsail around the extremely windy course. Despite the shortcomings, our team did perform well within the boat given the conditions and managed to save the boat from a couple instances where things could have gone very wrong.

Day three saw the race course closer to the city in an attempt to create a flatter sea state from the swell that had built overnight. The breeze continued to soften throughout the day, creating a very challenging race course where wind oscillations were tough to point out. We were able to keep a fairly consistent score line until the last couple races. We ended the day with two tough starts that put us towards the back of the back of the fleet. Fortunately, in the final race of the day, the breeze was very light which created many opportunities to climb back through the fleet. Despite starting in last place and being many boat lengths behind the next boat, were were able to get back in touch with the race after the first two legs and were able to pick out the perfect line up the first upwind to catch up to the leaders. By the final turning mark of the course we had moved into first by a good margin and sailed to our first place finish of the event. It was an amazing moment to end the day, especially considering the competition we were up against.

We were able to carry the momentum from day three into the final day of the event, scoring a 3,2,1 in the first three races of the day and moving into the top 5 on the leader board. With only two more races left in the event, we were aiming to keep the consistent score line and hope to finish as high as fourth in the event. Unfortunately, the competition proved challenging and our team finished the last two races near the back of the fleet. With mixed results on the final day, the team ended the World Championship in 7th place. The result was tough knowing we left many points on the table, but given the caliber of the competitors we finished ahead of, our team was very proud of the result as the youngest team on the race course.

Our team was very fortunate to be able to compete at such a high level sailing event against the best sailors in the world. This experience was invaluable and was only made possible thanks to the generosity of Malcolm Gefter and the tremendous support from the St. Mary’s College of Maryland Boat Foundation. ”