–FOR IMMEDIATE RELEASE—
By Chris Love – –  The West Coast contingent of the American 505 Class showed off its big guns as well as its infantry this past weekend at the Pacific Coast Championship, hosted by Santa Barbara Yacht Club May 15-17. Though the 505 is a dinghy, the boat’s technical prowess and penchant for speed apparently qualified the fleet of 17 for entry to SBYC’s yearly Santa Barbara Skiff Festival, sharing the water with slightly smaller fleets of International 14’s and 29ers.

Even in the boat park, the favorites were known to all. Perhaps the most notable this spring is Santa Cruz, Cal. skipper Mike Holt who successfully defended his world championship in South Africa in April, and his crew Rob Woelfel, who was also in the front of the boat when Holt won worlds the first time around in 2014. Howie Hamlin, who sailed with his regular crew Andy Zinn, has been the driving force of the class since the 1970’s, and has won several major trophies along the way including the 1999 505 Worlds in Quiberon, France and the 2002 JJ Giltinan Championship, known as the world’s championship of 18ft Skiff Racing. Mike Martin of San Francisco won his first world championship crewing for Hamlin in 1999, then claimed the title again as helmsman in 2009. Martin and his crew, Adam Lowry, had planned to challenge Holt at the 2015 worlds, but were unable to get there due to unforeseen shipping complications. Another San Franciscan, Ted Conrads, who finished third at the recent Worlds, arrived with fill-in crew David Kenny, an accomplished part-time 505’er. Needless to say, these teams are intimately familiar with each other.

Friday’s racing kicked off in a spirited 10-12 knots and the veterans Hamlin/Zinn got off to a quick start with two bullets. The breeze dropped throughout the afternoon, culminating in a floater for part of race three, and a tough race for both Hamlin and Holt’s boats. Martin/Lowery took the win and the lead. With expectations high for more breeze, Saturday delivered a somewhat disappointing 6-8 knot choppy race course, but it was enough for Hamlin/Zinn to get back on track with two more first place finishes and top the leaderboard going into the final day. Sunday morning didn’t look promising, but after an onshore postponement, the fleet went out for what turned out to be another two good, closely fought light air races.
Besides the roster full of sailing rock stars duking it out in the front, this regatta offered plenty of memorable moments for the entire fleet. SBYC’s deck was the perfect location for post-racing debriefs along with good beer, classic margaritas and even a stiff martini served under the guise of a “Cold Remedy,” loosening tongues and making for fun conversations between competitors. Sailors reported sightings and close calls with gray whales each day. In one instance, the local whales looked to be ducking the fleet on port tack. “In hindsight we should have lee-bowed them and lead them over to the right instead of crossing through to the left. Clearly whales are smarter than we are!” says Richard Mundell of Royal Victoria Yacht Club in British Columbia, Canada. 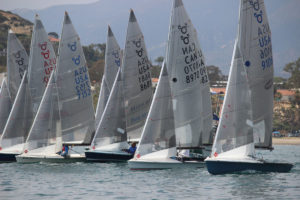 One boat served as the fleet’s recruiter, unexpectedly bringing on new sailor’s each day. On Friday Jeff Sharp jumped in to crew for Bob Tennant while crew Richard Mundell desperately sought some back therapy in downtown Santa Barbara. Then on Saturday and Sunday local youth sailing rock star and current 49er campaigner Dane Wilson gave 505s a try for the first time, driving for Rich (Bob had to fly home). Four people in one boat in one weekend!
When it was all said and done, it was the veterans Hamlin and Zinn who stood atop the podium with an impressive four race wins in seven total races. Next were Holt and Woelfel, edging out Martin and Lowery by a single point when factoring in the drop of their worst race. Not far behind in 4th were Kevin Taugher of Alamitos Bay, Cal. and local Don Smith, considered by the fleet to be an SBYC “founder” on account that he can remember when the current clubhouse was built, back in 1966. Their only race win came on the final race, putting the pair ahead of Ventura Yacht Club’s Ryan Cox and Garrett Baum on the tiebreaker.