Gdynia, Poland, 21 JULY 2019 — Team USA finished 3rd overall in the World Youth Sailing Nation’s Cup (same finish position for our World Optimist Team this year too), and earned one Gold Medal in the nine-fleet event, held in Poland this year. Gold came for the USA in the Girls 420 fleet, where Maddie Hawkins & Yumi Yoshiyasu won the regatta with a race to spare. Text below from World Youth Sailing Website: 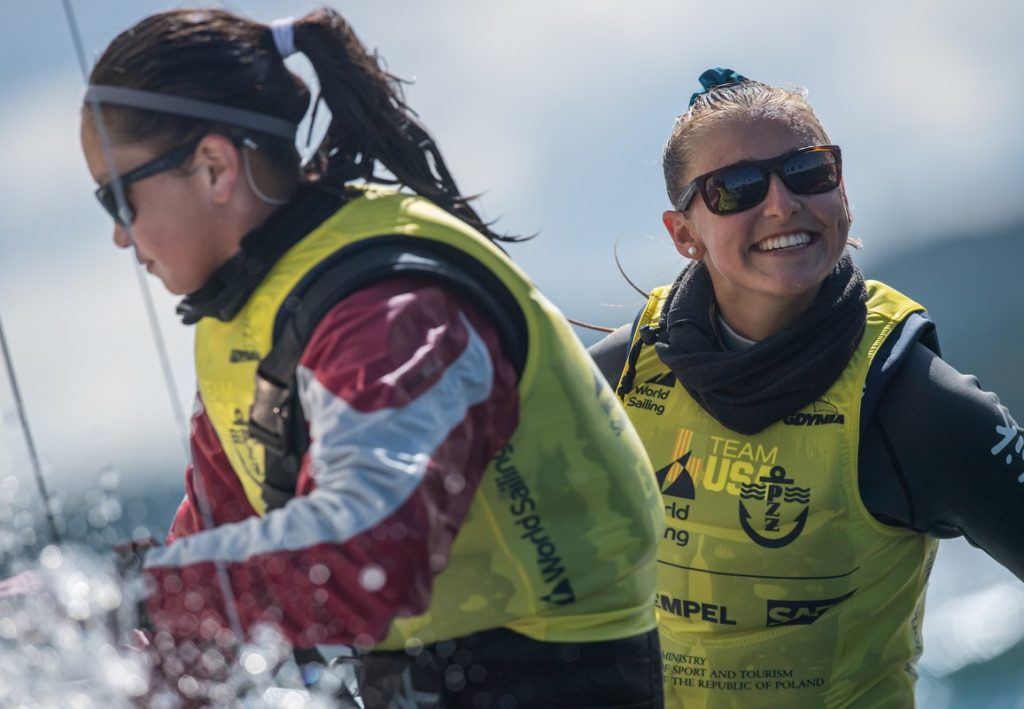 So, the Girl’s 420 perpetual RYA Trophy will head to the USA for the third consecutive year after Hawkins and Yoshiyasu picked up from where Carmen and Emma Cowles left off.
Consistency was king for the Americas and going into Friday their lead stands at 22-points. As their highest score is a seventh, they cannot be caught so will walk away as champions.
“We were crying on the way in,” the pair said enthusiastically, “We’re really happy. We’re just going to go out tomorrow and have a solid race but it doesn’t matter because gold is wrapped up.”
They recorded a fourth and a fifth from their two races which was in their game plan. Hawkins commented, “Honestly we were going out there with a mindset to get top seven finishes. That’s all we really needed. We just made sure we could chip off boats and weren’t getting stressed about not being in first or being in 15th. We wanted to be as consistent as possible.”

On their victory, the Americans said, “It’s pretty amazing. Having got silver last year, we came back and brought that experience here to get gold. We worked hard all year to get here and it feels really nice to get what we wanted to accomplished. 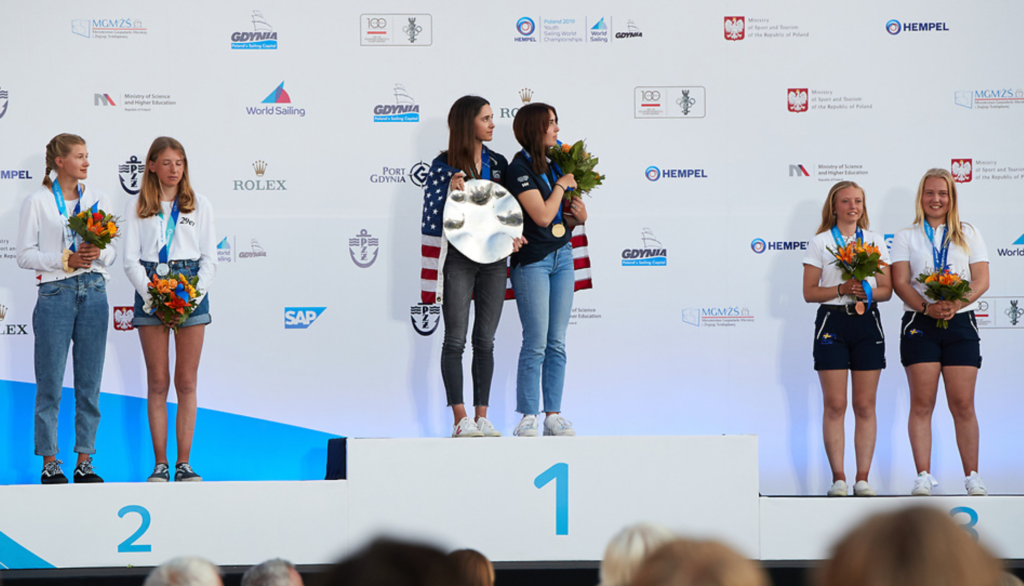 “It was a lot of work last year. We did a great job of improving throughout but this year we got on top early on. We got a better hold of our tactics and we worked really hard on our tracks and we studied the rest of the fleet and it was very helpful for us.”

Here is how our American team finished in all 9 fleets:

A dramatic final race in the Boy’s Laser Radial turned the podium inside out in Gdynia, Poland as the Hempel Youth Sailing World Championships came to a close.

Poland’s Tytus Butowski and Australia’s Zac Littlewood were fighting for gold but got stuck in the middle of the fleet and their match racing opened the door for others to steal gold. Turkey’s Yigit Yalcin Citak saw an opportunity and claimed a gold from almost nowhere.Littlewood and Butowski ended up locked on 63 points and the Australian claimed silver having won two races across the nine race series. Butowski, a resident of Gdynia, settled for bronze but it could have easily been gold.

Nine World Champions were crowned on Gdansk Bay as a week of racing that’s featured something for everyone concluded.

The Boy’s and Girl’s 420 titles were confirmed the day prior with Seb Menzies and Blake McGlashan (NZL) and Madeline Hawkins and Yumi Yoshiyasu (USA) claiming the titles. The Nacra 15 gold had also been decided with Will Cooley and Rebecca Hancock (AUS) sealing the deal after a consistent performance.

Competition was wide open for medals in the remaining six fleets but gold medals went to Mathias Berthet and Alexander Franks-Penty (NOR) in the Boy’s 29er, Berta Puig and Isabella Casaretto (USA) in the Girl’s 29er, Turkey’s Citak and Italy’s Chiara Benini Floriani in the Laser Radial fleets and Fabien Pianazza (FRA) and Linoy Geva (ISR) in the RS:X.

Ahead of the final Boy’s Laser Radial race, Littlewood and Butowski were split by one point with a good points advantage but not enough for them to get embroiled in close quarters as their discards were high scores.

But that didn’t stop them as they locked horns which positioned them in the middle of the pack. Those racing without pressure subsequently attacked to hit the front of the fleet.

Turkey’s Citak, who had to rely on his rivals slipping up, focused on finishing at the front of the fleet and he did exactly that, claiming a fifth. He crossed the line knowing that his rivals were behind but had to wait and see where they came.

A 22nd for the Polish racer and a 23rd for the Australian ensured the Citak’s 56-points were enough for him to take gold as they were locked on 63-points.

“I’m so happy right now,” said Citak. “I just want to thank everyone who’s supported me – my club, my family my friends. My goal was to always finish in the top three. In the last race I was aiming for the top ten at the first mark but I rounded in 13th. But then I passed the other guys and finished fifth and now I’m here right now. The race didn’t finish for me when I crossed the line. It felt like one month waiting for them to finish.”

Littlewood upgraded his 2018 bronze to silver and the Polish sailor was his nations sole medallist, claiming bronze.

Things were less dramatic in the Girl’s Laser Radial. Italy’s Chiara Benini Floriani had a good lead and confirmed gold with a second. “I’m very happy,” she said giggling. “I’ve had a lot of fun at this event. I started very well in the last race and I was first at the top mark but then I was overtaken so I finished second. It’s a great thing to win here as the other sailors are very good.”

In the Boy’s and Girl’s 29er, Mathias Berthet and Alexander Franks-Penty (NOR) and Berta Puig and Isabella Casaretto (USA) were well placed to seal gold with two races planned. Two race wins for the Americans and an 8-4 for the Norwegians confirmed their titles.

“It’s not sunk in yet,” commented the Norwegians. “I’m pretty sure when we’re up on the stage we’ll be pretty thrilled.

“We had consistent racing in all types of conditions – light, medium and heavy winds and waves. It was perfect for us. We’re really satisfied with our week.”

On their victory, the Americans said, “It’s pretty amazing. Having got silver last year, we came back and brought that experience here to get gold. We worked hard all year to get here and it feels really nice to get what we wanted to accomplished.

“It was a lot of work last year. We did a great job of improving throughout but this year we got on top early on. We got a better hold of our tactics and we worked really hard on our tracks and we studied the rest of the fleet and it was very helpful for us.”

Stand out performances in the Boy’s and Girl’s RS:X confirmed gold for France’s Pianazza and Israel’s Geva.

Israel’s Geva won two races and finished second in the other to clinch the girl’s gold. “I am happy and excited,” expressed the young Israeli. “I liked today’s wind and I won two races but the Russian passed me in the final race. It was a long week with a lot of different conditions and I am happy with my result.”

In the Mixed Nacra 15, Australia’s Cooley and Hancock were models of consistency all week long, proving that you don’t have to win races to win regattas. In the final race they bagged their first race win, going out on a high.

“This regatta’s been absolutely amazing,” commented Cooley. “It’s been one of the most fun regattas so far. The competitors were so nice and it was really tight competition. Even though we’ve won, there are always things we could have improved on.”

Hancock commented, “I personally didn’t think we could win. It was mind blowing on the first day when we did as well as we did. It was a big wake up call.”

Having won gold on Thursday, New Zealand’s Menzies and McGlashan also signed off the week with a win in the Boy’s 420. Demetrio Sposato and Gabriele Centrone (ITA) finished third in the final race to confirm silver and Israel’s Tal Sade and Noam Homri took silver by a single point.

America’s Hawkins and Yumi Yoshiyasu will take the Girl’s 420 title back to their home nation for the third consecutive year, following in the footsteps of Emma and Carmen Cowles who won the title in 2017 and 2018.

The 2019 Hempel Youth Sailing World Championships draws to a close with the awarding of the perpetual trophies at the closing ceremony.

The next edition of the event will take place in Salvador, Brazil in December 2020.