Close
Signup to Receive the latest news, events and Sailing jobs Via your inbox
You are here: Home / Regatta News/Results / 2021 505 North American Championship Results & Report
30 boats from 12 states and 2 countries, including many of the world’s top 505 teams, came to Newport, RI and Sail Newport for the 2021 505 North Americans. We sorely missed our Canadian contingent, most of whom couldn’t come race but who encouraged the running of the event as planned and named. After 12 races over 4 days, current World Champions Mike Martin and Adam Lowry hoisted the trophy yet again, besting Mike Holt/Carl Smit by 11 points, with Nic Baird and Eric Anderson 1 point further in arrears. AJ Conrads, sailing with Sol Marini, finished as top female helm. For full results go HERE.
Newport showed off its variety of conditions, first with Thursdays building northwesterly, full of puffs and shifts for four races. Boatspeed always helps, but managing the left side advantage upwind and finding puff lanes downwind were critical. Martin/Lowry led after 4 with 9, followed by Smit/Holt (11) and Baird/Anderson (13). 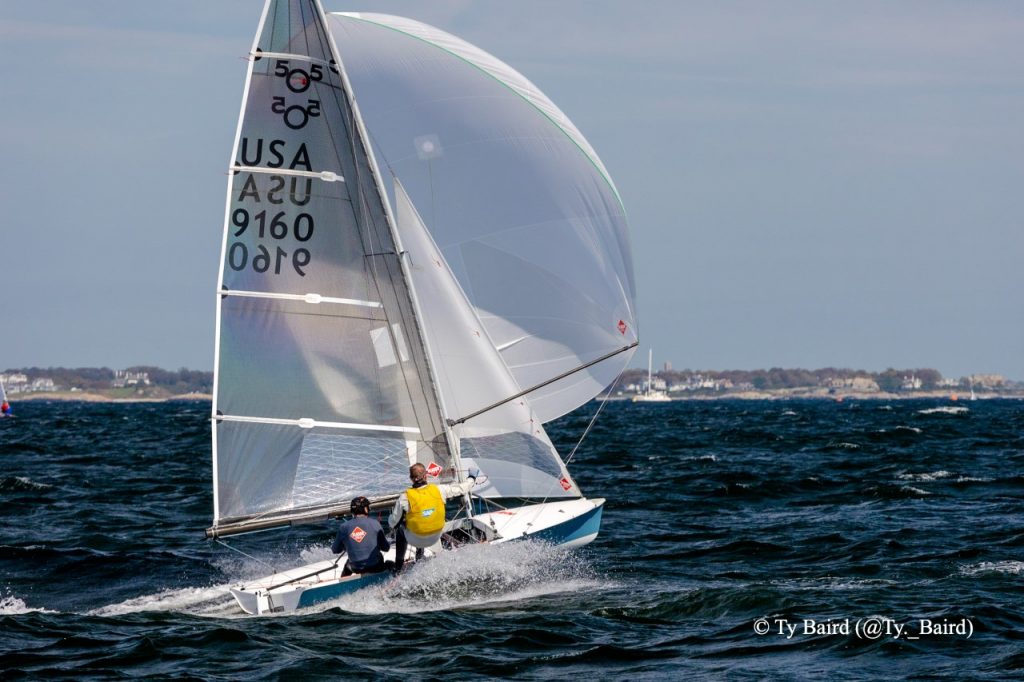 Friday was a lighter affair, with crews off the wire downwind for the first time. Despite 1 mile beats, the top marks were swarms of boats. Luckily 505 sailors all seemed to have watched enough Sesame Street as children and are able to work these things through. PR Sue Reilly and her team dealt with 2 180* wind shifts in getting 3 off, with the last race coming alive down the first run with the fleet’s first taste of outside at Newport in fresh conditions. The top 2 boats both scored both of their throwout races on Friday, proving the challenge, but the overall picture remained fairly steady.
If Friday was a taste, Saturday was an eating contest, with Newport serving up a classic high-teens southwesterly with enormous groundswell thanks to an offshore storm. Holt and Smit grabbed the day by the throat with a 2-1-1 to Martin/Lowry’s 1-4-2 and move within 2 for the overall.
Despite Sunday’s somewhat lighter forecast, Sail Newport Regatta Director Matt Duggan chose to send the fleet outside on time to complete the last two races of the 12 race series. Once the fleet had hit the racing area, it was clear that Newport would overdeliver once again with nearly the same wind direction as Saturday, just with less punch. In the first race, Baird/Anderson stretched an early lead over the first half of the race, only to have Martin/Lowry come screaming out of the right on the second beat to take the lead and ultimately the race win. With Holt/Smit crossing 4th, Martin/Lowry had one hand on the trophy. Despite a frenzied search for a hole on the start line in the last race, Martin/Lowry once again found their way to the front row and sealed the event with a final race win.
Sail Newport, all of the RC volunteers, and Regatta Chair Amie Huebner all deserve massive thanks and kudos for putting together an instant classic of an event. Who even knows the last time Newport hosted a 505 Class Championship, but for sure the next one won’t be so far away.
Another thing not too far away is the 2022 North Americans, in Clearwater FL from February 16-20, immediately preceded by the Midwinters on February 12 and 13.
Photos by the awesome Ty Baird.