Close
Signup to Receive the latest news, events and Sailing jobs Via your inbox
You are here: Home / Classes / J/35 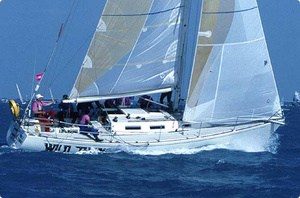 It is probably safe to say that no racer-cruiser in the annals of fiberglass sailboat production elevated the self-esteem of sailors as dramatically as the J/35. When it was introduced in the spring of 1983, it was the closest thing ever seen to instant gratification in an offshore handicap racer and one-design. If it is an exaggeration to say that new owners stepped aboard, raised the sails and began winning races, it is a small one.

What made the J/35’s dazzling performance so accessible to sailors of varying experience and ability? Primarily it was its pure hull form, a sweet easily driven shape free of the rating rule-induced exaggerations that made other handicap racers of the 1980s cranky and difficult to sail. With its light weight and long sailing length, big but uncomplicated rig and sensible deck layout, the J/35 was graced with a responsive yet forgiving nature over a wide range of conditions.

These endearing characteristics gave the J/35 a parallel life as cruising boat. Easily handled by a family, it offered plenty of space below for accommodations that were plain but practical.

The J/35 was created in response to a downturn in the U.S. economy. To attract buyers in the offshore racer-cruiser category, the brothers who ran J Boats, Bob Johnstone, who handled marketing, and Rod Johnstone, designer of the J line, decided to modify one of Rod’s earlier designs, the J/36. With a slightly shorter hull, improved keel with a lower center of gravity and a masthead, instead of fractional, rig and cost reductions realized by eliminating wheel-steering and making some cabin amenities optional, the new 35-footer, offered at a base price $49,500 ($30,000 less than its predecessor), was an instant hit.  More than 170 boats (built by TPI) were sold in the first three years; there are 330 sailing today. One-design racing activity has been strong since the J/35 debuted-as many as three dozen of the powerful 35-footers have been on the starting line for class championships. The fact that the field is more level in J/35 class racing because of the boat’s forgiving nature has not deterred some of the world’s top sailors from competing in class events.

The boat’s greatest impact, however, has been in handicap racing. How ironic that this boat designed with a conscientious disregard for any handicap rule is one of the most successful handicap racing boats ever. It has taken honors in major offshore races around the world, including even the singlehanded transatlantic race. It is the most popular racer-cruiser rated by the IMS. In spite of a challenging PHRF rating more common to 40-footers, the J/35 remains a perennial winner in club racing.

Mainly, though, the J/35’s appeal endures today for the same reason the boat was immediately popular when it was introduced 16 years ago-because, in the words of Bob Johnstone, it is “a magical boat that turns good sailors into great sailors.”