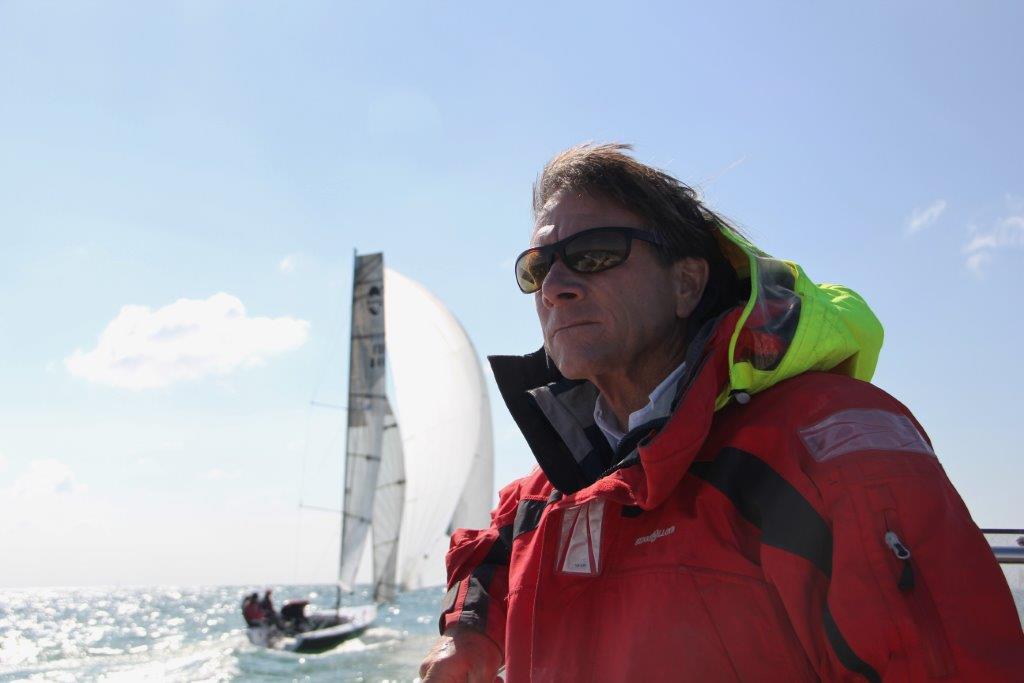 Ken Legler is an icon in the sailing and coaching community. This editor humbly suggests that Ken is one of the most knowledgeable, dedicated people that has ever graced the sailing community. As a Tufts grad, I will admit that I may well not be objective, but I was a hockey player at Tufts, and still his influence reverberated around campus when I was there. Few have had greater dedication, vision, success, and willingness to counter the current than Ken, (carbon mast Larks!) and the few times I sailed Larks at Tufts with the team, I knew that there was something special about this program on Mystic Lake. I am always in awe of the list of graduates from his program. Ken’s accomplishments, and those of his sailing teams, are too many to detail here, but here’s a short list.
Sail1Design caught up with Ken, and asked many of the same questions we did in our interview with Adam Werblow. Enjoy!
Ken: I have the advantage of reading Adam’s answers first.  Though I agree with old friend Adam on many things I will try not to repeat his answers.
What, in your opinion, is the very best thing about our sport?
Nature, variety, and social; the variety of conditions and boats but perhaps more important, anyone can play, then brag or spout excuses at the post-race party.  Also, sailing is very social because women can play with and against men and visa-versa.
England “Knights” people. Elton John, Paul McCartney, and of course Ben Ainslie (I mean, Sir Ben Ainslie). If you could “Knight” 3 American sailors, who would they be? Requirements:

The first two are getting on but still sail locally:
Buddy Melges (my fav ambassador of sailing in the US)
Dennis Connor (like him or hate him he was Mr. America’s Cup for a long time)
Jonathan McKee (though he is too humble to want to be called “Sir”)
If you asked for four, the next would be “Dame” Betsy Alison.
Are pro sailors ruining, or saving, One-Design sailing in fleets like the J/70, Etchells, etc?
Neither, they are enjoying it along with the rest of us.  Some might say they are enjoying it a bit less since they might feel more pressure to win and increase their pay (or save their job).  Then again they’re in it cuz they love it.  If one doesn’t like sailing against pros, one choose a class that doesn’t have them.  Every class is different and there are hundreds of active classes.
What is your absolute top, favorite, one-design class? 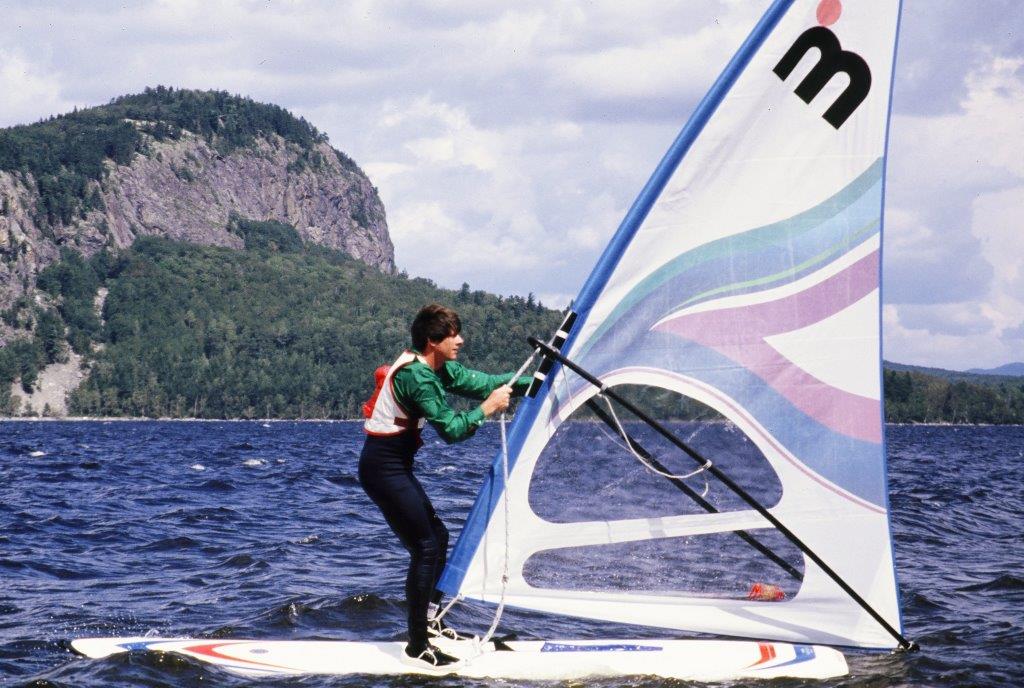 The 505 is the Cadillac of dinghies.   So smooth, so fast, so stable (compared to narrower boats).  I only wish I had the time and money to sail and race one.  Tasars are really cool and simple but unless you are from Seattle you will never know.
Many people say that Pro Football will be gone in 25 years. Where will college sailing be in 25 years? What will it look like?
It looks almost the exact same now as it did 25 years ago except for far more professional coaching.  Except for life altering violent injuries, pro football is awesome but new knowledge of concussions will limit the young participants in football.  No violence in sailing.  It is cerebral, healthy, and fun.  Why should it go anywhere?  The only threat is the cost of college but it is already ridiculously high and college sailing is thriving.
The America’s Cup is in AC foiling Cats. Good thing, or bad thing? If bad, wh 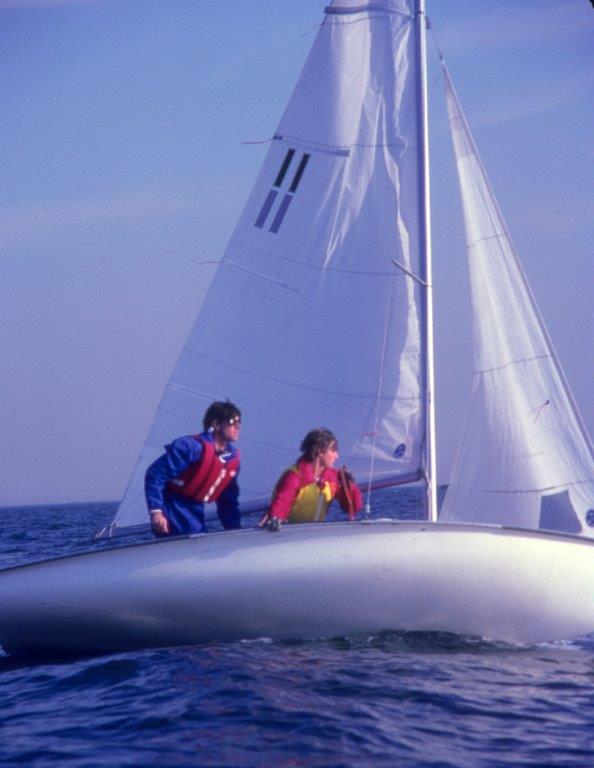 at should this event be sailed in?
The radical change from behemoth lead mines to foiling cats on short stadium courses is terrible for purists and many old timers but really good for new audiences.  I’m for sharing our sport with as many people as possible.  Despite being an old-timer myself, I’m loving it.  Sunday’s show in Chicago (and New York the month before) was spectacular for aficionados like me or beginners.  In short, stadium sailing is cool.  It’s tough for competitors with a higher luck factor but they are getting paid so they deal.
Should the sport of sailing continue to try to get on TV? Why or why not?
Not to be redundant (see previous answer) but I think putting sailing on TV is great if the producers can afford what it takes.  I’ve always thought if one could put pro football tv production money into sailing then it would be fantastic on tv.  Whatever one might think of Larry Ellison (his humongous powerboat once blocked my view of the team racing worlds), his investment into tv sailing has been fantastic.  Starting with hiring Stan Honey (the same guy that invented the first down line for football on tv) and bringing the game in close to both shore-side fans and tv fans has been a massive contribution in our sport, allowing millions(?) of new fans to get a glimpse or more of what could be considered an extreme sport (at least in heavy air).
US Optimist Class: Great for the sport, or too much, too soon?
Depends on the kid.  For some? Yes, too much too soon.  I learned sailing in a very gentle way, on a very old lead mine 30-footer well before dealing with the frustration of losing races or losing control of my dinghy.  Starting dinghy racing at age eight can be problematic or it can be a head start in a life-long sport. 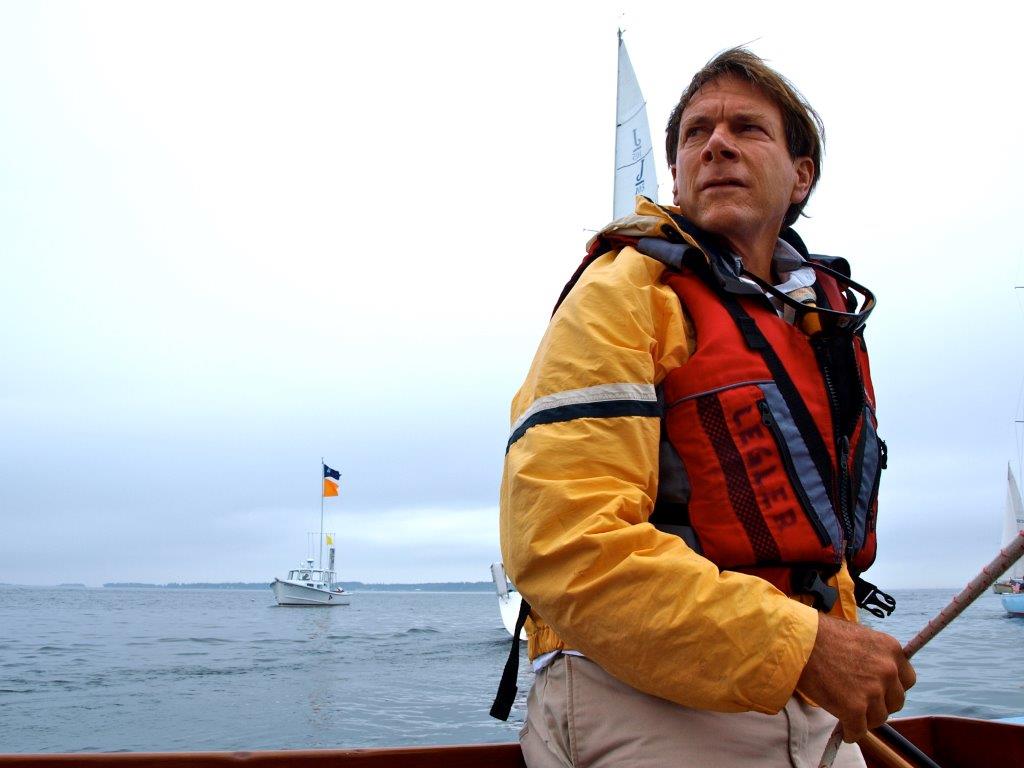 ON COLLEGE SAILING
On a scale of 1-10, how would you rate the competency, professionalism, and the overall state of US Sailing Umpires and Judges? Why?
I was against having team racing umpires despite the horrific waste of time in team racing protests.  The problem is finding enough volunteer umpires to work all day in ice water.  MAISA is doing better than NEISA, they have more umpires for less top teams and events, and slightly better weather.  It is, however, for the better to know the immediate result and let umpires do the dirty work rather than undergrad debaters.  Back to your original question; I’ll rate our umpires an 8; I’ll rate our judges a 7.  That said, there are judges that rate a 10 and others that have, well….poor judgment.
Shouldn’t college sailing be a one-season sport? Why, or why not?
Good question but I think we are far better off with two seasons that get interrupted by bad weather.  I watch our other teams at Tufts.  Our “single season” lacrosse players practice individually all year.  They start with “captain’s practices” shortly after second term begins (indoors), then they go hard core until nationals.  We cannot practice individually in the winter nor is it safe even when the pond is not frozen.  Further, we want to spread it out so we can back off during academic crunch time.
Overall, what is the weakest thing about college sailing? In other words, where, or in what realm, can the ICSA improve the most?
The boats are too low performance but, they kind of have to be for cost and for harsh conditions.  I don’t like FJs overall, especially compared to 420s in an open sea (Yale, Kings Point) or Larks in flat water (Tufts).  That said FJs work just fine for close racing in 5-18 knots and they are cheaper to build and cheaper to maintain.  It has to be cheap for club teams and we need more teams.
ON COACHING 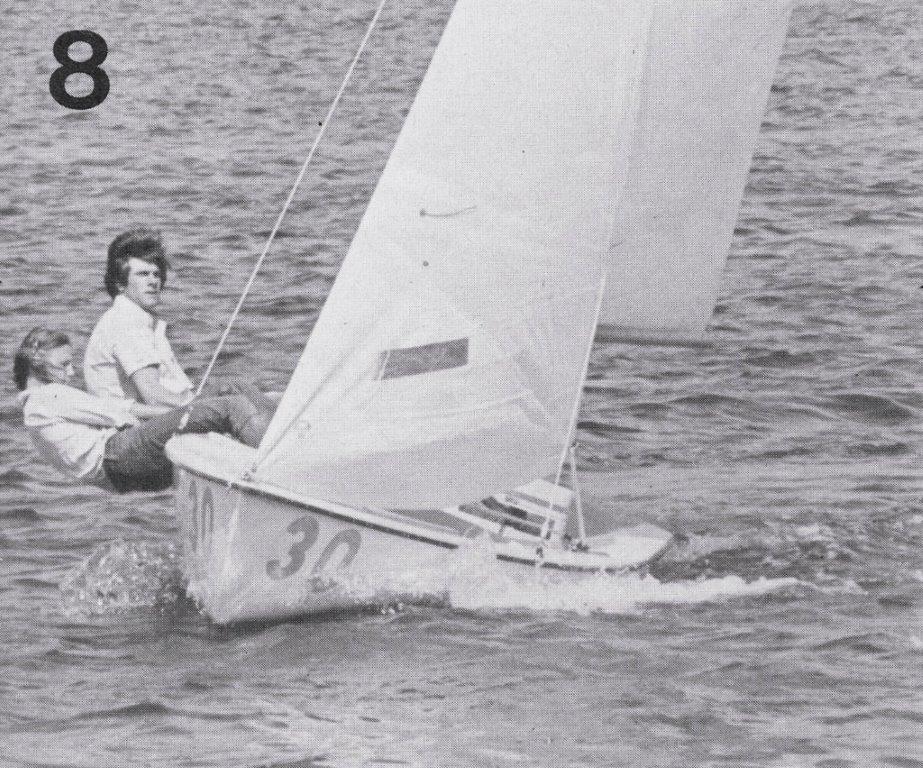 As a coach, how do you fit in your own personal sailing? If your answer is “I don’t”, then do you miss competing, or does it not bother you?
I compete a tiny bit in the summer and I do miss it but, I get to live sailing vicariously through coaching and photography.  I also have a wealth of sailing and racing memories.  I sailed every day from teens into my 20s except for dead of winter (weekends only).
College sailing is a sport where women can compete with men, on equal footing. This is rare. Does this affect how you coach?
I like coaching women but it is different.  Women are such cooperative listeners.  Me: “okay quick team meeting”  Women immediately sit in a semi-circle in front of you, then take everything you say literally, so I must be careful with what I say and not exaggerate.  Men go right on doing what they were doing knowing I am full of BS anyway.
Women can and will cry once in a while.  It’s not the end of the world (unlike when a man cries) but it definitely means something is wrong.  And perhaps you should do something about it.
What problems, if any, can this create on a team?
Having an equal amount of women is not a problem; it’s a good thing (see next answer)
What positives, if any, can this create on a team?
Women are a good influence on men (IMHO) and visa-versa.  Even socially, when men start talking and acting chauvinistic toward females, as they often do on male only teams, the women on coed teams immediately stop them, be it in the van, on the dock, or at parties.  It can still be a problem when there is only one female, such as keel boat teams.  I know, I have caught myself joining the men in stupid talk when there are only one or no women around. 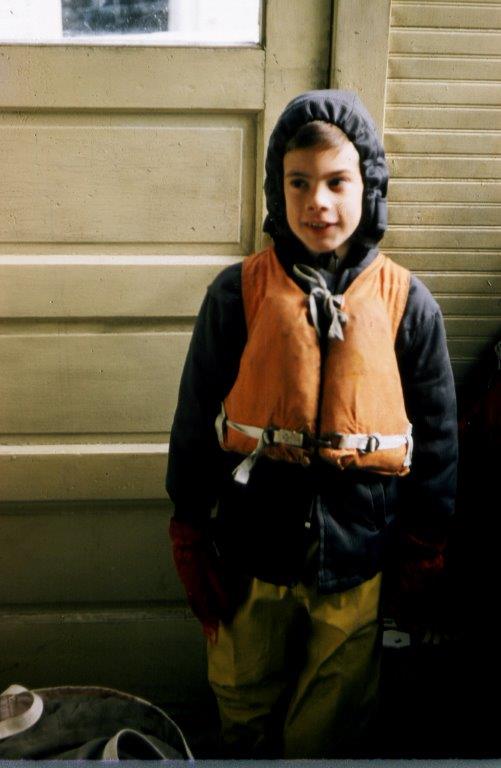 PERSONAL STUFF
Do you remember the very first time you went sailing? If so, tell us about it.
Sorry, too young to have that in my memory bank.  I do remember a 23’ ketch in the driveway named “Petrel” and I remember frostbiting a Dyer Dhow as crew with cold feet.  My best early memories are dragging my hands or feet off the leeward rail of the family 30 foot wooden cruiser “Penelope” on windy days off Larchmont.
Why have you been with TUFTS for as long as you have?
(36 years so far, after two at KP and one at Navy and time as player/coach at URI) The health benefits are such that I can’t leave…just kidding.  What could be more fun for work but watching college sailing while taking an active role in educating young people that are already way smarter than I am?
Given the new Bacow Pavilion, do you sometimes miss the simplicity of your old cement rectangle, where sailors changed together, boats were crammed in, and the bathrooms were, at best, not great? My point is, was this a more intimate, sailing-focused setting that facilitated team bonding?
You are kidding, right?  Team bonding in a cramped, cold, dark, and dusty room?  When we got in, students changed as quickly as possible and ran for their lives.  Now they put boats away on the ground floor, change in the second floor heated locker room, then move to the third floor classroom for the daily de-brief.  I finally get to coach.
When you were young, did you dream about the career you have today?
No but, when I worked at the US Sailing Center on Lake Ontario, I dreamed of managing a sailing center in Newport.  Then coaching seemed to be the natural path for someone who sailed every day in college and didn’t study enough.  In the meantime, Brad Read got that other dream job at Sail Newport which didn’t open after I got the Tufts job.

Based on your experience in the sailing industry, what advice might you give to those seeking a similar career path?
Well, it will be hard to raise a family on a sailing coach salary but if you marry smart, and stay married, you can do alright financially while working a job that you love.