Close
You are here: Home / Archives for lark dinghy 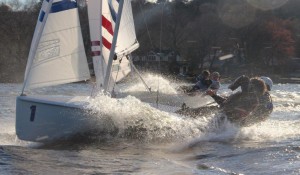 A new era has begun at Mystic Lake, home of the Tufts University Sailing Team.  Just purchased is the sixth iteration of Larks class dinghies, except these are not ordinary Larks.  For the first time Larks are being produced in the United States at Whitecap Composites in Peabody, MA, just 15 miles from Tufts.  Builders of about 80 college dinghies for MIT, with new dinghy fleets at Cornell, Eckerd and elsewhere, Whitecap has produced 24 gorgeous “Turbo Larks”  Why turbo?  These are not the class legal Larks so popular in England.  These are ultra-light, ultra-stiff, and oversized canvassed high performance college dinghies.  Designed for young adults, not junior sailors, Turbo Larks are light air upwind machines capable of moving at, or higher than the true wind speed in light air.  In breeze these Larks are definitely turbo-charged. 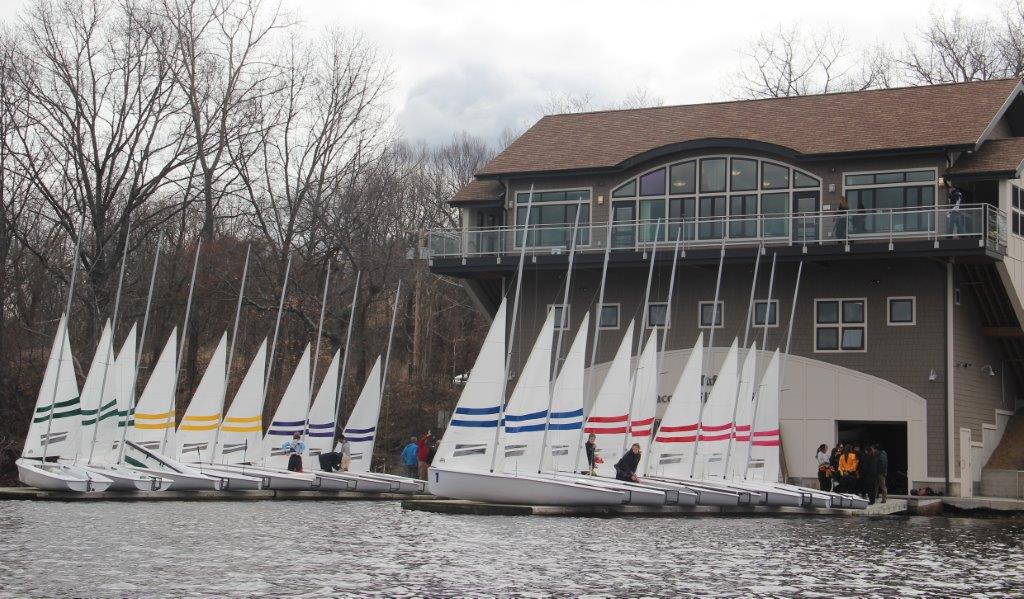 Hulls and decks were hand made with expert craftsman, are resin infused and bonded to a Soric core.  The result is a lighter, stiffer, more consistent structure for simply a better boat.  Doyle Sailmakers in Swampscott, MA also hand craft locally matching or even improving upon the long lasting sails they made back in 2010.  The enormous “fat-head” mainsail powers up the boat as a spinnaker would downwind but twists off in big breeze upwind for any weight combination.  The jibs were increased in area as well.   Selden Spars of Charleston SC, provided tapered aluminum kappa section masts for power and weight saving along with ultra-light carbon booms. 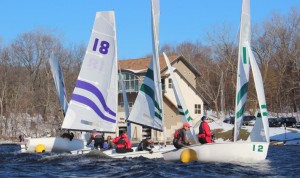 Unique to college sailing features on these Turbo Larks include boom vang and Cunningham controls led back to both sides in between skipper and crew.  Rudders are cassette style and centerboards are now composite, unlike the old plate aluminum boards of the past.  The best feature of all might be the hull design which has passed the test of time since 1967.  The deep “V” bow and narrow waterline allows for phenomenal light air upwind speed and feel.  The flare to the rail puts hiking power where it belongs, outboard, allowing skipper and crew to keep far more power than they could on a narrower boat.

Tufts is home to some dozen college regatta per year and has been chosen host site for the 2017 Fowle Trophy Regatta for the New England Intercollegiate racing championship next April.  This May some 48 alumni teams will take part in a massive Tufts Alumni regatta.

By Rachael Silverstein
Since the first inter-collegiate dinghy fleet race in 1930, small boats and fast racing have become a healthy addiction for young sailors across the country. In 1934, Princeton developed the Tiger dinghy, which expanded college racing along the east coast. More recently, schools have tried the Vanguard 15, Tech Dinghy, Firefly, and Lark as their chosen double-handed boat, but the Club 420 and Club FJ have taken over the scene. A wide array of classes has been tried and tested through the generations of college sailors and many will follow, but some teams have held onto their boats and don’t intend to let go. 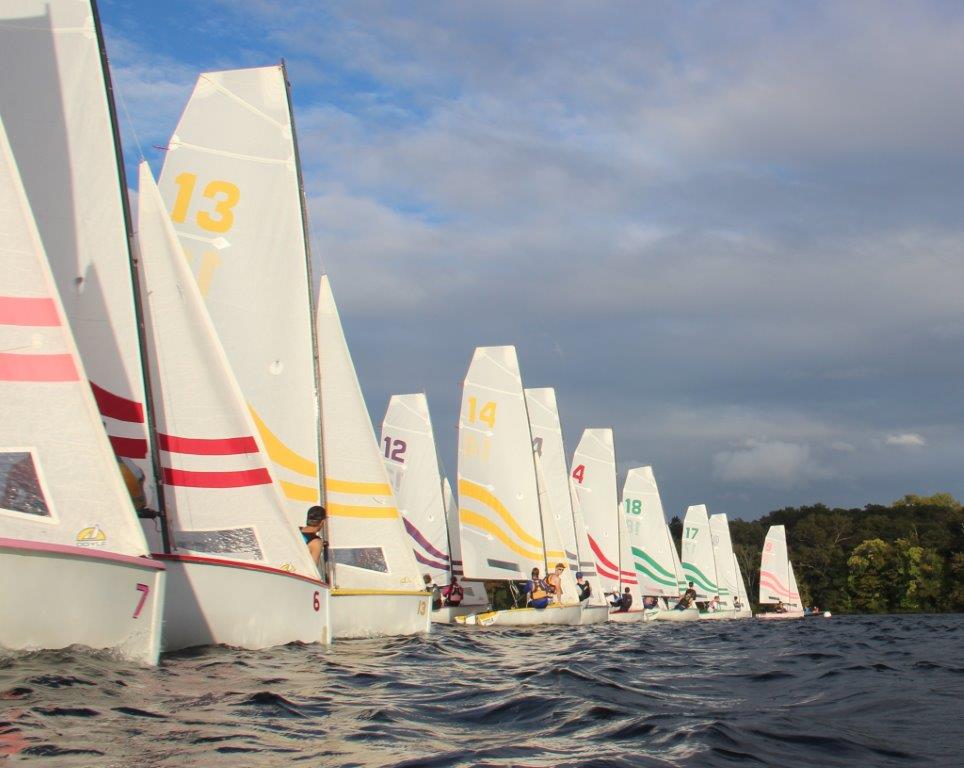 As the sport grows on the collegiate level, there is a push to find a boat that meets the specific needs of a competitive college dinghy. For Ken Legler, Head Coach of Tufts University Sailing Team, the college dinghy decision is easy. When asked why he devoutly chooses a new fleet of Larks decade after decade of coaching Tufts, he declares, “primarily because sailing is supposed to be fun.”

In 1972, Tufts traded in the Wee Nips, a single-sail vessel similar to Tech Dinghies, for a fleet of Larks, and hasn’t looked back. The team has sailed through five fleets of Larks, and is making room for their sixth by Spring 2016. Larks, primarily built in England, were more difficult to purchase and maintain than their mainstream counterparts—420’s and FJ’s. For their new fleet, the Jumbos teamed up with Whitecap Composites of Peabody, MA to undertake Lark construction with a more “institutional use in mind.” Legler works closely with Whitecap on a design to “improve durability and make repairs easier.”

Although Tufts sailors aren’t training in FJ’s and 420’s, the team’s long history of racing success does not suggest that practicing in Larks is hurting them in any way. Legler explains, “Larks are different, at least a little, from FJ’s and 420’s, just as those two classes are different from each other. There are small technical differences in how the sails are trimmed… The Lark is the same size as the 420 and FJ, and as such we are training the right sized people. It is more stable than an FJ, but less stable than a 420.” To make up for those differences, Legler enters his team into regattas every weekend, “at all levels, including club events, for our new crews to train muscle memory for sailing FJ’s and 420’s.”
When the sailors are practicing at home, Larks keep the sailing on Mystic Lake exciting.“The boats have an incredible feel to the helm and to the acceleration,” Legler describes, “the deep and narrow blades allow for instant sharp turns for team racing and other tactics. The light rig allows for dynamic mast movement for even faster maneuvers.” Racing doesn’t slow down when the wind lightens up, either. “Larks are very easily driven in light air due to the long, narrow waterline allowing good racing in winds as low as one knot, which is not the case in club dinghies,” he admits. The boats can sail as fast as the wind in up to six knots and plane as easily as a Laser, making it an ideal boat for sailing on Mystic Lake.

Whether the Lark will catch on as a popular college dinghy is uncertain, but they are waiting for willing sailors at the Bacow Sailing Pavilion. Legler labels this class as boats that “are rewarding when sailed well and unforgiving when not sailed well.” He believes that college sailing should be done for love of the sport, and provides his sailors with a fleet that is fun and challenging to sail. The way Coach Ken Legler sees it, “if college sailing is part of the education and part of the whole college experience for student sailors, then there is no better boat to enjoy the aesthetics, the healthy outdoor exercise, the camaraderie, and the challenges of friendly competition.”