Close
You are here: Home / Archives for z15

By Airwaves writer Tyler Colvin
The past couple decades has seen rapid growth in the numbers of athletes participating in college sailing.  In that time the level of sailing has increased exponentially.  It could be argued that ICSA Team Race Nationals is the most competitive event in North America on an annual basis.  The numbers of high-level post-graduate sailors has increased accordingly.  Several boats have arisen to fill the need for a competitive dinghy, such as the V15, however none have had any kind of permanent lasting power.  Enter the Z15, the new post-collegiate performance dinghy in the US market from Zim Sailing.  A technical boat with advanced rig and hull design characteristics, the Z15 looks to fill a gaping hole in the lives of recent graduates.
The Boat: Technically Sound
Not content with simply remaking the wheel and redesigning existing boats, Zim looked to veteran dinghy builder Steve Clark for inspiration using modern technology and hull designs.  At 14’9” long with a beam of 5’5”, the Z15 is slightly longer and wider than an FJ while trimming over 30lbs for a hull weight of 180lbs thanks to the fully cored resin infused construction process. 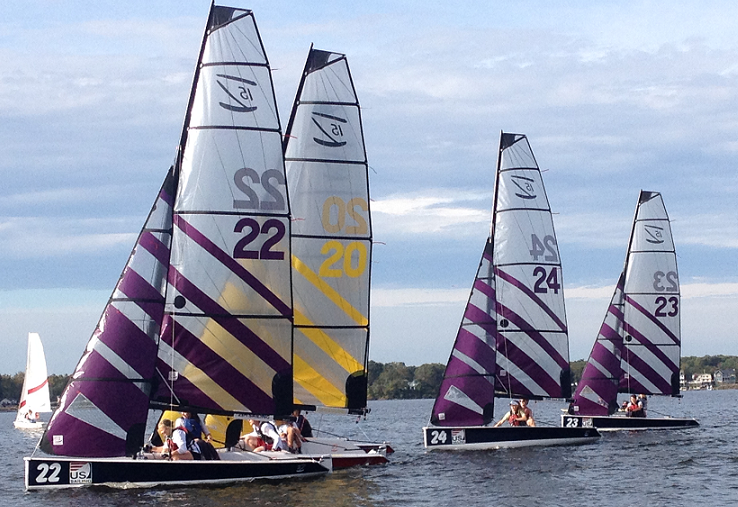 The rig is an update on traditional construction as well.  A fully carbon, tapered rig from Southern Spars is fully adjustable and provides a healthy amount of power and eliminating the need for a third (spinnaker/gennaker) sail off the wind.  Designed with a wide range of weights and skill levels in mind, the rig is easily depowered for breezy conditions.
Set Up and Sailing: Quick
Thomas Sitzmann, head coach of the Severn School sailing team and previously of Bowdoin College has brought the Z15 to high school sailing in Maryland.  On the Z15, “It’s not the same old thing. It can out-sail most dinghies in 3-4 knots, and will definitely perform well in more wind. So, I’d say I enjoy the fact that it is bringing innovation, change, and more options to our sailing world.”  Light, fast and technical the Z15 provides new challenges for sailors used to the traditional double-handed designs. 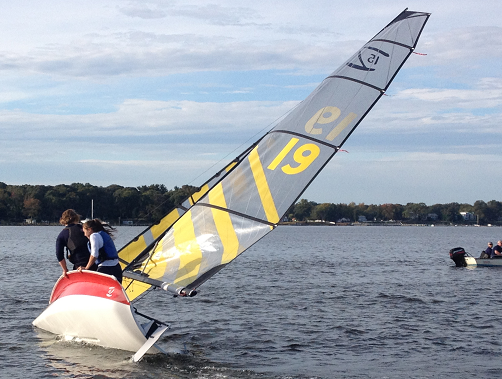 Upwind the boat is sensitive with a narrow groove.  “It’s tippy,” said Sitzmann, “and in my brief time sailing it, it seems to be very finicky…In a way, that’s what may be best about the boat.  It will force sailors to learn more about sail controls, trim, and balance.”  A light air beast, the Z15 was put on display this past fall at the Hinman Trophy US Team Race Championships.  Athletes described the boat as sensitive and very responsive to weight placement and sail trim.
Downwind the Z15 takes some adjustment.  The lack of a big off-wind sail means the introduction of a whisker-pole to get the clew of the jib out and drawing.  The ability to wing the jib out further than held by hand means deeper angles can be sailed than what a two-sail boat might normally be able to achieve.  The hull shape makes weight placement key and thusly much less roll is needed to boat-handle than an FJ or 420.
Why Sail? New and Improved
Most of today’s double-handed boats were designed over half a century ago.  While they are still more than capable and serve a very large purpose in the youth and collegiate sailing community, there is a need for a technical dinghy for high-level fleet and team racing.  It continues to evolve as feedback comes back from the racecourse and promises to be a competitive class for years to come.  Mentioned before, it was featured in the Hinman Trophy this past fall and will be the boat of choice for the new 2015 Team Race Midwinters (replacing V15 Midwinters). 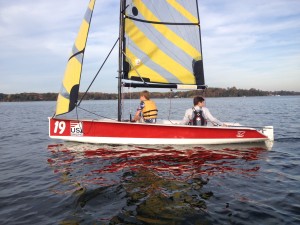 Whether you are stepping out of collegiate dinghies, or simply looking for something new and exciting, the Z15 looks to be an exciting new platform for racing.  With a price tag around $11,500, the Z15 is a more exciting, faster and most important, growing cousin of the V15.  For the moment it would appear the Z15 is the best option for post-collegiate sailors and yacht club members looking for a fun, fast boat to team race in.  Bottom line, the Z15 infuses new life into the young adult dinghy racing circuit and provides a new alternative in the performance market.

By Airwaves writer John Storck
Recently, I had the opportunity to take the new Zim 15 out for a test sail. The whole experience was pretty cool, as the Zim team assembled sailors, boat designers, and sail makers at their “super secret test site” for a great afternoon.

When we arrived at the site, we found Steve Perry (founder and President of Zim Sailboats) beginning to rig the boat, and so we walked down to help out. At first glance, the boat seemed way more complex than what I anticipated. I suppose my first mistake was having a preconceived idea that had me comparing it to my beloved V15. It is nothing like a V15. The mast is more similar to a 49er than the aluminum telephone poles that we are so used to in U.S. dinghy sailing. And the rigging is also much more advanced, with a pretty sleek control area at the base of the mast, as well as the cunningham and vang being led back to a place where either the skipper or crew can easily manage them, which is really important given the higher performance design of the rig and sails.

As more people showed up, including Bob Adam (VP of Sales at Zim) and Steve Clark (designer of the Zim 15), there was a definite excitement in the air. It was clear that these guys were as fully committed to this project as anyone can be about anything. They also stressed to us that all of the rigging was still open to change, and encouraged us to give them any feedback that we could. After a few more short discussions about the plan, we put the boat in the water.
It was a long sail out of a river into the Mount Hope Bay on a breezy afternoon. Inside of the river, conditions were flat and shifty, and the boat was very responsive; tacking extremely fast. Out in the bay, conditions were windy and wavy. The boat didn’t seem to enjoy those conditions as well, but if you were sailing against a bunch of other Zim 15s it would still be fun. I should also keep in mind that we have no experience sailing this boat, and were likely doing some small things very wrong. Off the breeze, the boat performed about the same as a V15 would.
More apparent was the higher degree of technical challenge. The skiff-style rig, square-top main, “dangle-pole” to change the jib profile, and other rigging controls all lead to a sailing experience that is far less dumbed-down and much more comparable to the modern world of sailboat racing. Racing this boat will be more of a mental exercise in changing gears than what most young adults are used to. I know that was part of the goal when Steve Clark designed this boat, feeling that we needed to keep people engaged. 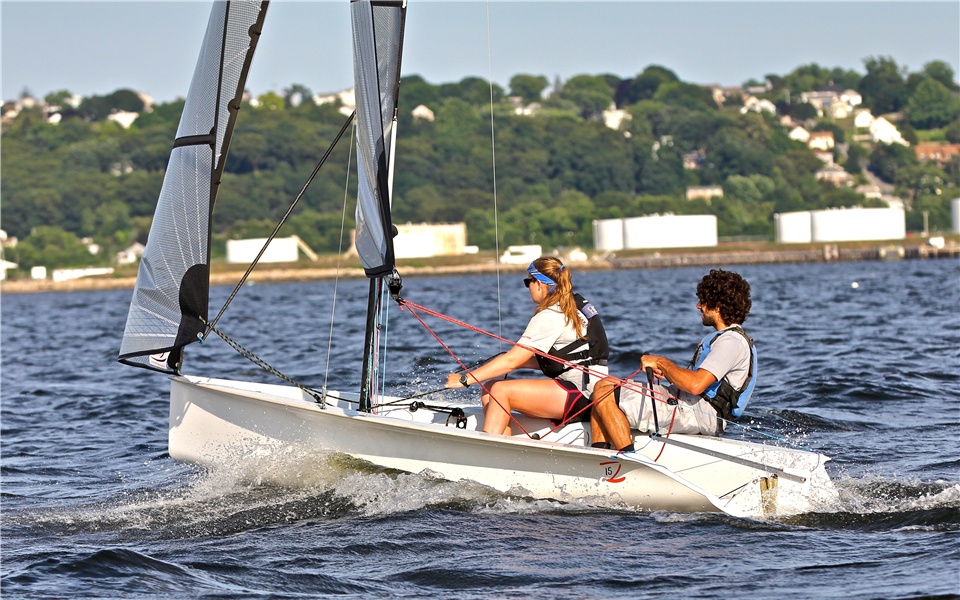 You don’t have to go far in the sailing community to stumble upon a discussion regarding the participation drop off post-college in our sport. Stay in that discussion 30 seconds longer and you’re likely to hear a few profoundly delivered opinions on how to change that reality. I don’t know what is necessarily going to swing the tide on that problem, but I commend the Zim team for trying to do something about it. I have no idea whether or not their project will succeed, but it’s good news for all of us that they’re trying.
Obviously there’s been a lot of discussion about the V15 lately. I think it would be a mistake to compare these two boats. I also wouldn’t be surprised if both boats could have a vibrant future, existing in very different ways within the sport. The Zim 15 is being targeted for Yacht Clubs and other organizations, as a fleet of exciting boats to be raced by and attract young members. I actually think that it could be a great fit there. On the other side, as good as provided boat sailing is, it is exclusive in its very nature. The grassroots type of sailing that the V15 once was will never exist in the world of provided boat sailing because of that exclusivity- there’s only so many boats. So perhaps the answer for what’s next is more than just one thing. 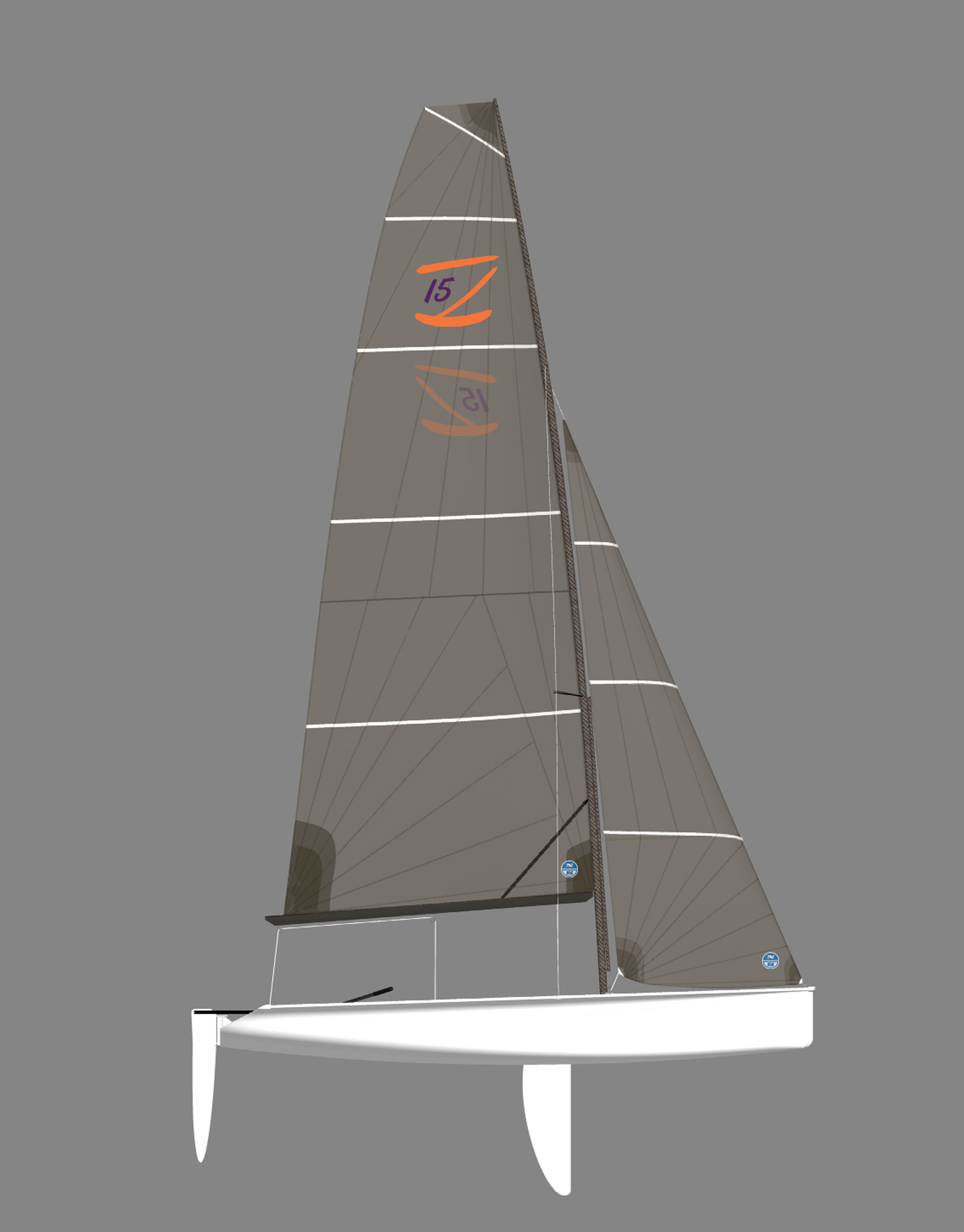 The drawing board:
Over the past two and a half years the collegiate and post collegiate market has changed quite a bit.  While other companies worked to freshen up the 420 the Zim team was not content to put a new deck on a boat designed in 1959.  These introductions are not new, but based on old designs and old technology.  The market deserves better!  We enlisted the expertise of long time performance sailor and former owner of Vanguard Sailboats, Steve Clark to design a new “forward thinking dinghy” using technology of today.  Over the past several years, ex college sailors have been settling for slow keelboats, or expensive one design classes after graduation.   The North American small sailboat marketplace is eager for a performance based dinghy that is a blast to sail.  The Zim 15 is all new cutting edge technology for production sailboats and will move dinghy sailing forward.

The target market:
We designed Zim 15 as a performance dinghy for the 20-30 year olds looking for more excitement.  The high drop off rate after college is not new and we feel a more exciting product will help keep more young sailors on the water.  The Zim 15 will appeal to the growing team race market as well as a great boat to fleet race.  The Zim 15 is the perfect boat for yacht clubs to purchase fleets and provide organized team and fleet racing.  This model will provide outstanding value to young members.  The tunable rig and large sail plan will raise and widen the competitive weight range of the sailors relative to other products making the boat a far more favorable option with a broader appeal.
Features and benefits:

Construction:
The Zim 15 is built using a fully cored resin infusion process.  This allows a very repeatable build in terms of quality and boat weight while reducing the styrene emission and exposure for the workers.  The hull to deck joint is bonded with Plexus to ensure maximum strength and durability.  The foam core enables a far stiffer panel to weight ratio relative to non-cored laminates.  In short, the construction process is environmentally friendly and will provide a very stiff and light boat that will stand up to the demands of today’s performance dinghy sailor.
For additional information visit www.zimsailing.com or follow the progress on the Zim Facebook page https://www.facebook.com/home.php#!/pages/Zim-Sailing/80529607394
Specifications
Length 14’9”
Beam 5’5”
Draft 3’8”
Mainsail Area 114.64 ft2
Jib Area 39.92 ft2
Designer – Steve H. Clark